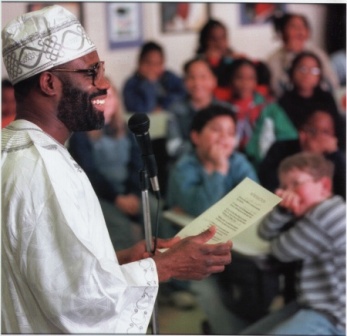 Philip Emeagwali is an Igbo Nigerian-born engineer and computer scientist and geologist who was one of two winners of the 1989 Gordon Bell Prize, a prize from the Institute of Electrical and Electronics Engineers, for his use of a Connection Machine supercomputer to help analyze petroleum fields. His formula allows a large number of computers to communicate at once.

Philip Emeagwali was born in Nigeria in 1954. Like many African schoolchildren, he dropped out of school at age 14 because his father could not continue paying Emeagwali's school fees. However, his father continued teaching him at home, and everyday Emeagwali performed mental exercises such as solving 100 math problems in one hour. His father said he taught him until Philip "knew more than he did." Growing up in a country torn by civil war, Emeagwali lived in a building crumbled by rocket shells.

Unable to attend school, Philip Emeagwali instead journeyed to the public library, spending most of his day there. He sped through books appropriate for his age and moved up to college-level material, studying mathematics, chemistry, physics and English. When Philip Emeagwali had learned all he could from the library, he applied to take the General Certificate of Education exam. Taking the high-school equivalency exam through the University of London, Philip passed it easily. With is GED, he was now eligible to apply for college. Keeping his options open Philip applied to colleges in both the United States and Europe.

At the age of seventeen Philip Emeagwali saw the opportunity for one of his greatest dreams to come true. He was awarded not just admission but a full scholarship to Oregon State in 1974 and completed his Bachelors Degree in Mathematics in 1977. But Philip Emeagwali was just getting started in his education. He soon moved to the Washington, D.C. area and received a Master's Degree in Environmental Engineering from George Washington University in 1981 and a second Master's Degree in Applied Mathematics from the University of Maryland in 1986. During the same period of time he received another Master's Degree from George Washington University, this time in Ocean, Coastal and Marine Engineering.

In 1987, Philip Emeagwali was accepted into the University of Michigan's Civil Engineering doctoral program and received a doctoral fellowship. At Michigan, he participated in the scientific community's debate on how to simulate the detection of oil reservoirs using a supercomputer. Growing up in an oil-rich nation and understanding how oil is drilled, Emeagwali decided to use this problem as the subject of his doctoral dissertation. Borrowing an idea from a science fiction story about predicting the weather, Emeagwali decided that rather than using 8 expensive supercomputers he would employ thousands of microprocessors to do the computation.

Through research, he found a machine called the Connection Machine at the Los Alamos National Laboratory, which had sat unused after scientists had given up on figuring out how to make it simulate nuclear explosions. The machine was designed to run 65,536 interconnected microprocessors. In 1987, he applied for and was given permission to use the machine, and remotely from his Ann Arbor, Michigan, location he set the parameters and ran his program. In addition to correctly computing the amount of oil in the simulated reservoir, the machine was able to perform 3.1 billion calculations per second.

The crux of the discovery was that Emeagwali had programmed each of the microprocessors to talk to six neighboring microprocessors at the same time. The success of this record-breaking experiment meant that there was now a practical and inexpensive way to use machines like this to speak to each other all over the world. Within a few years, the oil industry had seized upon this idea, then called the Hyperball International Network creating a virtual world wide web of ultrafast digital communication.

The discovery earned him the Institute of Electronics and Electrical Engineers' Gordon Bell Prize in 1989, considered the Nobel Prize of computing, and he was later hailed as one of the fathers of the Internet. Since then, he has won more than 100 prizes for his work and Apple computer has used his microprocessor technology in their Power Mac G4 model. Today he lives in Washington with his wife and son.

"The Internet as we know it today did not cross my mind," Emeagwali told TIME. "I was hypothesizing a planetary-sized supercomputer and, broadly speaking, my focus was on how the present creates the future and how our image of the future inspires the present."

Encouraged by his success and newly found status, Emeagwali moved forward with further research and provided new theories and concepts for computer design. Many of these were based on the idea that computers were simply an extension of the function of nature and thus that they should be designed based on nature. One of his theories is aimed at exploring long-term effects of greenhouse gases and global warming. Emeagwali offered a new design for a computer based on honeycombs. Based on the theory of tessellated models, Emeagwali broke the Earth's atmosphere into sections that resembled honeycombs created by bees. He reasoned that bees are able to use the most efficient methods to develop their honeycombs and that following principles of honeycomb design in a computer will allow it to work in an optimal fashion. He believes that his hyperball computer will allow for weather forecasting far into the future and for simulated global warming trends in order to address the problem.