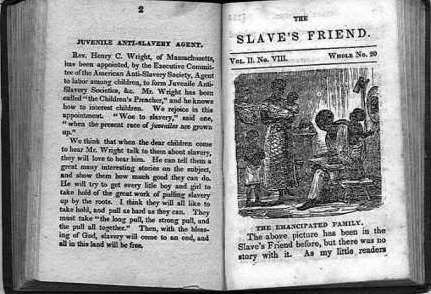 An abolitionist was a person who wanted to do away with slavery. Antislavery sentiment in the United States began in colonial times. But in the thirty years before the Civil War, the sentiment turned to militant action as blacks and whites began demanding the immediate abolition of slavery. Abolitionist organizations, both local and national, promoted emancipation of slaves and tried to aid fugitive slaves. Abolitionist publications attacked slavery as a moral and political evil, trying to raise the consciousness of northern whites and force the issue of slavery onto the national agenda.

Before America fought for and gained its independence, Quakers, most black Christians, and other religious groups argued that slavery was incompatible with Christ's teaching. Moreover, a number of revolutionaries saw the glaring contradiction between demanding freedom for themselves while holding slaves. Although the economic center of slavery was in the South, northerners also held slaves, as did African Americans and Native Americans. Moreover, some southerners opposed slavery.

On January 1, 1794, delegates from the abolition societies of Connecticut, New York, New Jersey, Pennsylvania, Delaware, and Maryland met in Philadelphia, a stronghold of the anti-slavery Quaker religion. The group voted to petition Congress to prohibit the slave trade and also to appeal to the legislatures of the various states to abolish slavery. The petitions pointed out the inconsistency of a country that had recently rejected the tyranny of kings engaging in "domestic despotism." Delegates published an address urging on U.S. citizens "the obligations of justice, humanity, and benevolence toward our Africa brethren, whether in bondage or free." The group planned to meet each January until slavery was abolished.

Free Northern blacks and their enslaved Southern brethren participated in personal as well as organized acts of resistance against slavery. In the North, African Americans faced huge odds and the systematic violation of their civil liberties. Consequently, many fervently supported the abolitionist cause with both open and surreptitious acts of rebellion. Northern blacks began forming groups to support the cause for freedom. As early as 1817, black Philadelphians formally protested African colonization, and by the late 1820s, black participation in anti-slavery societies had proliferated throughout the northeastern United States.

Enslaved blacks conducted personal protests against their own forced labor. Many broke tools, slowed the work pace, pretended ignorance, and in some cases, engaged in violence against their masters. A few worked and saved money to buy freedom for themselves and for their loved ones, while others used the most common form of resistance, escape.

One abolitionist group that helped slaves escape was the Underground Railroad. The Underground Railroad may be defined as the organized effort to assist runaway slaves in their dash for freedom. Since slipping away from one's master was a hazardous step, most runaways required help. The underground railroad was the popular name for the process of receiving these fugitives, hiding them overnight and then conducting them to the next station en route to freedom. In addition to helping runaways, this movement had a decidedly disturbing effect on slavery, making such property all the more risky. Wilbur H. Siebert, the foremost scholarly authority on the underground railroad, came to the conclusion that it was "one of the greatest forces which brought on the Civil War, and thus destroyed slavery."

Abolitionist literature began to surface around 1820 and the American Anti-Slavery Society was established in 1833. Until the Civil War, the anti-slavery press produced a steadily growing stream of newspapers, periodicals, sermons, children's publications, speeches, abolitionist society reports, broadsides, and memoirs of former slaves. The American Anti-Slavery Society produced The Slave's Friend, a monthly pamphlet of abolitionist poems, songs, and stories for children. In its pages, young readers were encouraged to collect money for the anti-slavery cause.

By the mid-nineteenth century, the ideological contradictions between a national defense of slavery on American soil on the one hand, and the universal freedoms espoused in the Declaration of Independence on the other hand, had created a deep moral schism in the national culture. During the thirty years leading up to the Civil War, anti-slavery organizations proliferated, and became increasingly effective in their methods of resistance. As the century progressed, branches of the abolitionist movement became more radical, calling for the immediate end of slavery. Public opinion varied widely, and different branches of the movement disagreed on how to achieve their aims. But abolitionists found enough strength in their commonalities, a belief in individual liberty and a strong Protestant evangelical faith, to move their agenda forward.

Although women were heavily involved in abolitionist activities, opinion was divided as to their proper role. Some people believed that women should serve in auxiliary roles that did not expose them to competition with men. However, many women played a highly visible role as writers and speakers for the cause. Some of them gained activist experience that they later used in support of women's rights. Well-known  female abolitionists included Maria W. Chapman, a spirited speaker, song writer, and editor of many volumes of The Liberty Bell songbook, Helen E. Garrison, wife of William Lloyd Garrison, and Harriet Tubman. Harriet Tubman guided more than 300 slaves along the Underground Railroad.