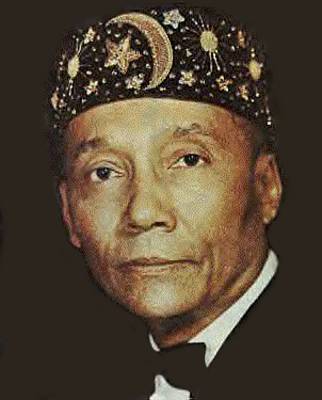 The Nation of Islam

The Nation of Islam is an African-American religious movement founded in Detroit, Michigan, by Wallace D. Fard Muhammad in July 1930. He set out to improve the spiritual, mental, social, and economic condition of the Black men and women of America. From 1934-1975, the NOI was led by Elijah Muhammad, who established businesses, large real estate holdings, armed forces and schools.

The N.O.I. teaches that W.D. Fard Muhammad is both the "Messiah" of Christianity and the Mahdi of Islam. According to their website, they are distinct from followers of the original religion of Islam by their doctrine of believing that Allah (god) was incarnated as W. Fard Muhammad, July, 1930. One of Fard's first disciples was Elijah Muhammad.

By the time Elijah Muhammad died in 1975, there were 75 NOI centers across America. In 1975, Warith Deen Mohammed or W.D. Muhammad was installed as Supreme Minister of the Nation of Islam. He renamed the organization "The World Community of Al-Islam in the West" which later became the American Society of Muslims. He shunned his father's theology and black separatist views, accepting whites as fellow worshipers and forging closer ties with mainstream Muslim communities to bring the Nation of Islam closer into Sunni Islam.

The main belief of The Nation of Islam and its followers is that there is no other God but Allah, revealing "Allah" by saying "who came in the person of W. D. Fard." Fard founded the Nation of Islam and subsequently installed Elijah Muhammad as the organization's leader. The official beliefs of the Nation of Islam have been outlined in books, documents, and articles published by the organization, as well as speeches by Elijah Muhammad, Malcolm X, Louis Farrakhan, and other ministers. Many of Elijah Muhammad's teachings may be found in Message to the Blackman in America and The True History of Jesus as Taught by the Honorable Elijah Muhammad. Many of Malcolm X's teachings of NOI theology are in his The End of White World Supremacy, while a later more critical discussion of those beliefs can be found in The Autobiography of Malcolm X (1965), co-written with Alex Haley.

Written lessons from 1930–1934 were passed from W. Fard Muhammad to his student, Elijah Muhammad. These were collected and entitled The Supreme Wisdom. The Nation of Islam continues to teach its followers that the present world society is segmented into three distinct categories. They teach that from a general perspective, 85% of the population are the "deaf, dumb and blind" masses of the people who "are easily led in the wrong direction and hard to lead in the right direction". These 85% of the masses who are said to be manipulated by 10% of the people. Those 10% rich "slave-makers" are said to manipulate the 85% masses of the people through ignorance, the skillful use of religious doctrine and the mass media.

The NOI teaches that the Earth and Moon were once the same, and that the Earth is over 76 trillion years old. The entire land mass on the Earth was called "Asia". This was, Elijah Muhammad claims, long before Adam.

The Nation of Islam teaches that Black people were the original humans. Louis Farrakhan has stated, "White people are potential humans…they haven’t evolved yet."  Farrakhan further said, "If you look at the human family, now, I'm talking about black, brown, red, yellow and white, we all seem to be frozen on a subhuman level of existence. In Islam and, I believe, in Christian theology and Jewish theology as well, there are three stages of human development. The first stage is called the animalistic stage of development. But when we submit to animal passions, then we can do evil things to one another in that animalistic stage of development. But when moral consciousness comes and we have a self-accusing spirit, it is then that we become human beings. Right now, we have the potential for humanity, but we have not reached that potential, because we are functioning on the animalistic plane of existence."