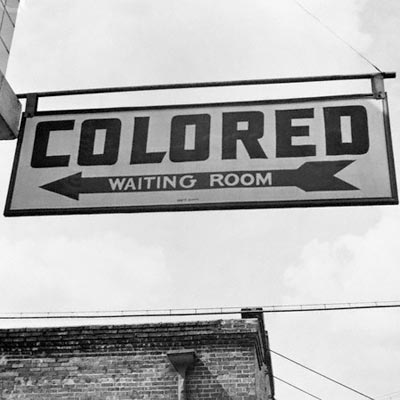 After the American Civil War most states in the South passed anti-African American legislation. These became known as Jim Crow laws. This included laws that discriminated against African Americans with concern to attendance in public schools and the use of facilities such as restaurants, theaters, hotels, cinemas and public baths. Trains and buses were also segregated and in many states marriage between whites and African American people.

The term Jim Crow is believed to have originated around 1830 when a white, minstrel show performer, Thomas "Daddy" Rice, blackened his face with charcoal paste or burnt cork and danced a ridiculous jig while singing the lyrics to the song, "Jump Jim Crow." Rice created this character after seeing a crippled, elderly black man, or some say a young black boy in the South dancing and singing a song ending with these chorus words:

"Weel about and turn about and do jis so,
Eb'ry time I weel about I jump Jim Crow."

Although "Jim Crow  segregated cars" on some northern railroad lines pre-dated the Civil War, in general the Jim Crow era in American history dates from the late 1890s, when southern states began to systematically  strengthen in law and state constitutional provisions the subordinate position of African Americans in society. Most of these legal steps were aimed at separating the races in public spaces and preventing adult black males from exercising the right to vote. In every state of the former Confederacy, the system of legalized segregation and disfranchisement was fully in place by 1910. This system of white supremacy cut across class boundaries and re-enforced a cult of "whiteness" that predated the Civil War.

Blacks suffered more than whites as the Southern economy spiraled downward in the 1890s. Despite this African American became targets for especially virulent white rage called by one historian the nadir of the post-slavery black experience. Lynchings killed hundreds of blacks per year and race riots ravaged cities like Atlanta and Wilmington North Carolina. During this time several states in the South effectively disenfranchised black voters by using stipulations such as owning property, poll taxes, and literacy tests to keep them out of the polls. Once the black population was disenfranchised white supremacy became a reality in the South.

Jim Crow was more than a series of rigid anti-Black laws. It was a way of life. Under Jim Crow, African Americans were relegated to the status of second class citizens. Jim Crow represented the legitimization of anti-Black racism. Many Christian ministers and theologians taught that Whites were the Chosen people, Blacks were cursed to be servants, and God supported racial segregation.

Beginning in Tennessee in 1875, state after state pushed through hundreds of Jim Crow Laws. In 1883, after the U.S. Supreme Court declared the 1875 Civil Rights Act unconstitutional blacks were banned from schools, restaurants, and even drinking fountains.

Many African Americans rightly refused to accept the new racial order. In North Carolina a group of African American made alliances with popular whites and were able to initially hold off the Jim Crow laws in their state. That changed in 1898 when whites rioted because a black newspaper in Wilmingham criticized the tactics of Southern Democrats. Two years after the riots the Jim crow laws passed.

Booker T Washington was the most influential black man during the Jim Crow era. His speech, The Atlanta Compromise given on September 18, 1895 to a predominantly White audience at the Cotton States and International Exposition in Atlanta, Georgia has been recognized as one of the most important and influential speeches in American history. In his famous speech,  Washington responded to the "Negro problem"—the question of what to do about the abysmal social and economic conditions of blacks and the relationship between blacks and whites in the economically shifting South.

Appealing to white southerners, Washington promised his audience that he would encourage blacks to become proficient in agriculture, mechanics, commerce, and domestic service, and to encourage them to "dignify and glorify common labour." Steeped in the ideals of the Protestant work ethic, he assured whites that blacks were loyal people who believed they would prosper in proportion to their hard work. Agitation for social equality, Washington argued, was but folly, and most blacks realized the privileges that would come from "constant struggle rather than of artificial forcing."

Washington also eased many whites' fears about blacks' desire for social integration by stating that both races could "be as separate as the fingers, yet one as the hand in all things essential to mutual progress." Washington's speech also called for whites to take responsibility for improving social and economic relations between the races. Praising the South for some of the opportunities it had given blacks since emancipation, Washington asked whites to trust blacks and provide them with opportunities so that both races could advance in industry and agriculture.

Jim Crow laws were tested in 1896 by Homer Plessey when convicted in Louisiana for riding in a white only railway car. Plessey took his case to the Supreme Court but the justices voted in favor of the Louisiana Court. William B. Brown established the legality of segregation as long as facilities were kept "separate but equal". Only one of the justices, John Harlan, disagreed with this decision.