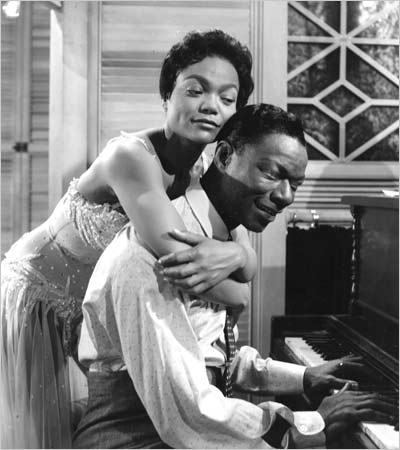 African Americans in the Arts

The definition of an artist is wide-ranging and covers a broad spectrum of activities to do with creating art, practicing the arts and/or demonstrating an art.  In deciding which African American artists we would highlight on our websites, we wanted to recognize persons, living or deceased, who have made significant contributions to the arts in America either as performing or practicing black artist in individual disciplines.

Being a  artist requires talent, but, for the African-American artists, talent is not always enough. In nineteenth century America, race often determined who could be trained in the arts. There were no special schools or places where African-Americans could freely exhibit their talents. These talented artists were excluded from the academies, associations, and teaching institutions available to white artists. In rare cases, beneficent white families broke the rules and provided knowledge, direction, and resources to budding African-American talents in the arts. Many of these white patrons were among the abolitionists of this period in American history.

In the early 1920's there was a movement was called the "Negro" or "Harlem Renaissance". This resurgence of literature, knowledge, and the arts coming out of New York was powerful. A fertile and acceptable door had been opened to African-American musicians, writers, poets, intellectuals, entrepreneurs, and visual artists. The opportunity was now available to grow and show off their best talents. From 1919 to about 1929, Harlem, New York became the capitol of cultural activity for African-Americans. This period in American history was extremely uplifting to African-Americans as a people. Personalities and individuals connected their expressions in writings, music, and visual artworks as they related to the political, social, and economic conditions of being black in America.

One of the best speakeasies in Harlem was the Cotton Club, a place that intended to have the look and feel of a luxurious Southern plantation. To complete the theme, only African-American entertainers could perform there, while only white clientele (with few exceptions) were allowed to patronize the establishment. This attracted high-powered celebrity visitors such as Cole Porter, Bing Crosby and Doris Duke to see the most talented black entertainers of the day. Some of the most famous jazz performers of the time - including singer Lena Horne, composer and musician Duke Ellington, and singer Cab Calloway - graced the Cotton Club stage.

Attending clubs in Harlem allowed whites from New York and its surrounding areas to indulge in two taboos simultaneously: to drink, as well as mingle with blacks. Jazz musicians often performed in these clubs, exposing white clientele to what was typically an African-American form of musical entertainment. As jazz hit the mainstream, many members of older generations began associating the raucous behavior of young people of the decade with jazz music. They started referring to the 20s, along with its new dance styles and racy fashions, as “The Jazz Age.”

The 1940's and 1950's were not easy times for the African-American  artists. Only the acceptable, critically acclaimed few were able to work and produce lucrative pieces of art. Patrons of the arts were still mostly white and wealthy. Artists like the Florida "Highwaymen" found an unique way to sell and display their art, by producing in mass quantities and selling their artwork on the side of the road. Thornton Dial's art functions like folk tales, combining African and American traditions to tell stories that are at once personal, political, and spiritual.