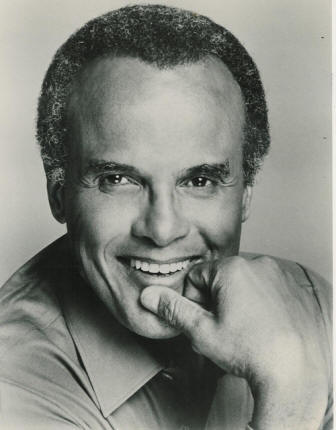 Harold George "Harry" Belafonte Jr. is an African American singer, actor and social activist. One of the most successful pop singers in history, he was dubbed the "King of Calypso."  Belafonte is best known for popularizing Caribbean style music with audiences throughout the world in the 1950's. During his career, Harry Belafonte has been a vocal advocate of civil rights.

Harold George Belafonte, Jr. was born in New York City, on March 1, 1927. He was baptized as an infant into the Roman Catholic faith. His father, Harold, Sr., was from the Caribbean island of Martinique, in the French West Indies. His mother, Melvine Love, was from Jamaica. Both were products of racially mixed marriages. Harry Belafonte spent much of his youth in his mother's home country of Jamaica. At the age of nine, his mother sent him and his brother to her native Kingston, Jamaica, where she thought it would be safer than the restless streets of a poverty-stricken, Depression-era Harlem. There he attended private British boarding schools, where caning for misbehavior was a common practice. As a boy with darker skin, he was not always treated well by his lighter-skinned relatives. Still, he enjoyed the sounds of calypso music, which would influence his later career.

When he was 13, Belafonte returned to New York, where he was a star on the track team at George Washington High School. In 1944, he left school to join the Navy. That same year, he met his first wife, Margurite Byrd. Belafonte married Byrd on June 18, 1948. They had two daughters, Adrienne and Shari. Shari would grow up to be an actress. The troubled marriage eventually ended in divorce. In 1957, Belafonte married Julie Robinson. They had a son, David, and a daughter, Gina. Gina became an actress, as well, starring in the 1980s hit television series, "The Commish."

Harry Belafonte stands out as one of the best-loved singers and entertainers of the 20th century. His dream began in December 1945, when he saw his first play and enrolled in acting classes with Marlon Brando and Walter Matthau. Belafonte’s first opportunities to perform were in cabarets, which soon landed him in the recording studio where he produced pop and then folk and world music. Though he won a Tony Award in 1954 for his Broadway performance in John Murray Anderson's Almanac, it wasn’t until his lead role in the film Carmen Jones that Belafonte became a bona fide star. His musical efforts benefited from his celebrity, with subsequent albums Belafonte and Calypso leaping to number one, the latter launching a nationwide craze for a form of Caribbean music that originated in Trinidad.

Harry Belafonte received Grammy awards for recordings in 1960, 1961, and 1965. In 1989, he was recognized as a Kennedy Center Honoree, the annual award recognizing careers of distinction in the arts. Some of his films included, Buck and the Preacher, in 1972; Island in the Sun, 1957; White Man's Burden, 1995, and the made-for television movie, Swing Vote, 1999. His complete recording history numbers in the thousands. His soft melodic voice crossed any barriers of racial prejudice, whether or not he approached that subject directly.

In the early 1950s, Belafonte developed a strong relationship with Dr. Martin Luther King, Jr. Belafonte worked tirelessly to mobilize artists in support of the civil rights movement. Belafonte was constantly visible to anyone with a television set in the 1960s. He was photographed on the pages of Time, and Life, magazines, often arm-in-arm with Martin Luther King and others, as they marched for civil rights in the United States. Belafonte was convinced that nonviolence was the only means to affect change for African Americans. The ongoing struggle to improve the lives of African Americans and blacks throughout the world occupied a great deal of his time and attention. In June 1998, Belafonte was present at Newcastle Upon Tyne University in Northern England when that institution memorialized his friend Martin Luther King, with a permanent plaque. They also honored Belafonte with an honorary doctorate, only the second person in the school's history to be so honored. Dr. King had been the first. One of the first African-American producers in television, Belafonte won an Emmy for 1959's Tonight with Belafonte and was a frequent guest on television variety shows throughout the 1960s and '70s.