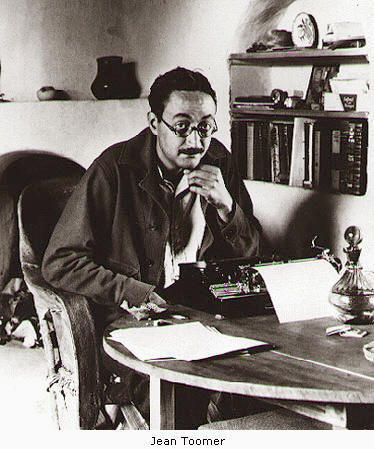 Jean Toomer was an American poet and novelist and an important figure of the Harlem Renaissance. It is somewhat ironic that Jean Toomer is remembered as the writer of one of the greatest novels ever written by a black author, because during his lifetime he only published one significant book and he spent very little time among blacks

Born Nathan Pinchback Toomer on December 26, 1894 in Washington, D.C., he was the son of Nathan Toomer, a planter, and Nina Pinchback, the daughter of P. B. S. Pinchback, governor of Louisiana during Reconstruction and the first U.S. governor of African-American descent. Like his parents, Toomer could easily pass for white, his heritage comprising several European and African bloodlines.

In 1895 Nathan Toomer abandoned his family, forcing Nina and her son to live with her somewhat tyrannical father in Washington. P. B. S. Pinchback agreed to support them only under the condition that the boy’s name be changed. Though his name was not legally altered, his grandparents thereafter called him Eugene Pinchback, in school he was known as Eugene Pinchback Toome, and later when he began writing, he shortened his name to Jean Toomer.

In 1914, Jean Toomer enrolled in the University of Wisconsin to major in agriculture, but quit after he found himself unable to win the race for the class presidency. Following that, he attended the Massachusetts College of Agriculture, then the American College of Physical Training in Chicago. In 1916, he became a devotee of socialism and gave lectures on the subject in a room that he rented out.

After leaving college, Toomer published some short stories, devoted several months to the study of Eastern philosophies and took a job as a principal in Sparta, Georgia. The segregation Toomer experienced in the South led Toomer to identify more strongly as an African-American.

From 1920 to 1922 Toomer wrote passionately, filling a trunk with poems, essays, short stories, and letters. During this time he made the acquaintance of Waldo Frank, a famous novelist of the time who became his friend and mentor. During this time Toomer wrote the short stories "Bona and Paul" and "Withered Skin of Berries," the plays Natalie Mann (1922) and Balo (1922), and many poems such as "Five Vignettes," "Skyline," "Poem in C," "Gum," "Banking Coal," and "The First American." The text for both "Brown River Smile" and The Blue Meridian, "The First American" was a lyrical expression of his racial and democratic idealism.

In 1923, Toomer published the High Modernist work, Cane. It is considered by many scholars to be his best work. A series of poems and short stories about the black experience in America, Cane was hailed by critics and is seen as an important work of both the Harlem Renaissance and the Lost Generation. Cane is an experimental novel which celebrates African Americans through the symbol of the title. Toomer also wrote extensively for the Dial and other little magazines and was the author of several experimental plays.

In 1926 he attended the Gurdjieff Institute in France, dedicated to the expansion of consciousness and meditation, and upon his return led Gurdjieff groups in Harlem and Chicago in the late 1920s and early '30s. He began a similar institution in Portage, Wis., in 1931.

Toomer found it more difficult to get published throughout the 1930s, and in 1940 moved with his second wife to Doylestown, Pennsylvania where he joined the Religious Society of Friends and began to withdraw from society. Toomer wrote a small amount of fiction and published essays in Quaker publications during this time, but devoted most of his time to serving on Quaker committees

Although influential on black writers, only since his death has he been recognized as a writer of note, primarily for Cane. Toomer stopped writing literary works after 1950. He died in 1967 after several years of poor health.