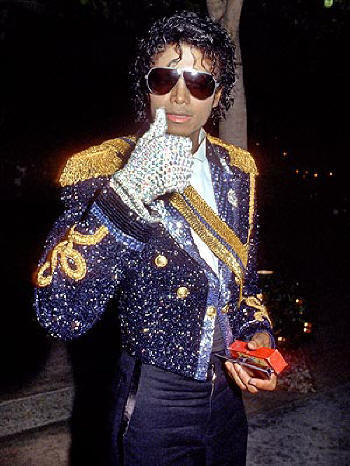 Michael Joseph Jackson was an African American recording artist, entertainer, and businessman. The seventh child of the Jackson family, Michael Jackson debuted on the professional music scene at the age of 11 as a member of The Jackson 5 and began a solo career in 1971 while still a member of the group. Referred to as the "King of Pop" in subsequent years, five of Michael Jackson's solo studio albums have become some of the world's best-selling records.

Michael Jackson was born in Gary, Indiana, on August 29, 1958, the fifth of Joe and Katherine Jackson's nine children. The house was always filled with music. Jackson's mother taught the children folk and religious songs, to which they sang along. Michael began his musical career at the age of 5 as the lead singer of the Jackson 5 who formed in 1964. In these early years the Jackson 5, Jackie, Jermaine, Tito, Marlon and lead singer Michael played local clubs and bars in Gary Indiana. In 1968 the Bobby Taylor and The Vancouvers discovered the Jackson five and from there they got an audition for Berry Gordy of Motown Records.

They moved to California and proceeded to rule the charts in the late 1960s and early ‘70s. The Jackson 5 recorded 14 albums and Michael Jackson recorded 4 solo albums with Motown. The Jackson 5 stayed with Motown until 1976, wanting more artistic freedom they felt they had to move on and signed up with Epic. The group name Jackson 5 had to be changed as it was owned by Motown, so they reverted to The Jacksons as they had be known in the early days. Brother Jermaine married Berry Gordy's daughter and stayed with Motown. Youngest brother Randy joined in his place. The Jacksons had a number of hit records and in total made 6 albums between the years of 1976 and 1984.

The Jackson 5's lead singer and focal point, Michael Jackson became more popular than the group in the early 1980s. He had a string of solo hits in the early-1970s including Got to Be There", "Rockin' Robin", and "Ben" In 1978 Michael Jackson played the Scarecrow in the film version of The Wiz. His success as the Scarecrow was a preview of what was to come in his videos, for Jackson seemed to care most about dancing. While working on The Wiz, Michael Jackson met producer Quincy Jones. They worked together on Jackson's 1979 album Off the Wall, which sold ten million copies and earned critical praise.

In 1982 Jackson and Jones again joined forces on the Thriller album. Thriller fully established Jackson as a solo performer, and his hit songs from the album, "Beat It," "Billie Jean," and "Thriller", made him a major pop star. Thriller went on to become the best-selling album in history, with over 45 million copies sold worldwide.  The first album to ever simultaneously head the singles and albums charts for both R&B and pop, it eventually generated an unprecedented seven Top 10 singles.The album garnered an unprecedented eight Grammy Awards.

Michael Jackson also snagged a Grammy for his participation in the E.T.: The Extraterrestrial soundtrack album. In May 1983 performing solo and with his brothers on NBC's Motown 25: Yesterday, Today, Forever special, Michael Jackson  popularized his distinctive "moonwalk" dance step. Michael Jackson's performance of "Billie Jean," was the  only one on the  program featuring a non-Motown song.

Michael Jackson was a crucial player in the all-star benefit project We Are the World, which sought to combat hunger in Africa. In addition to his epochal solo work, Michael Jackson continued working with his brothers as part of The Jacksons; their 1984 "Victory" tour was a landmark of the decade. On December 9th 1984 at the last concert of the Jackson's Victory Tour, Michael announced he was splitting from the group and going solo.

In 1984, while filming a Pepsi commercial, Michael Jackson was seriously injured when a pyrotechnic effect went awry, setting his hair on fire. The singer underwent surgery for scalp burns; he later received facial laser surgery.

In 1987 Michael released his much awaited third solo album, titled 'Bad', and launched his record breaking first solo world tour. The following year Michael wrote his first autobiography, Moonwalk, in which he claimed that his father, Joseph Jackson, had hit him as a child. Generally, however, the book (edited by Jacqueline Onassis) was considered unrevealing.

At the end of the 1980s Michael was named 'Artist Of The Decade' for his success off of his 'Thriller' and 'Bad' albums. It was around this time that Jackson moved from the Encino, California, family home to Neverland, an estimated $28 million, 2,700-acre California ranch complete with Ferris wheel, and an exotic menagerie.

In 1994 Jackson shocked the world when he married Lisa Marie Presley, daughter of the late rock legend Elvis Presley. Many felt that the marriage was an attempt to improve his public image. In August 1996 Jackson and Presley divorced. In November of that year, Jackson announced that he was to be a father. The child's mother was Debbie Rowe, a long-time friend of Jackson. They married later that month in Sydney, Australia. On February 13, 1997, their son, Prince Michael Jackson, Jr., was born in Los Angeles, California. The couple's second child, daughter Paris Michael Katherine Jackson, was born in 1998. Rowe filed for divorce from Jackson in October 1999.

Amidst the preparations for the concert series This Is It, Jackson died on June 25, 2009, after suffering from cardiac arrest. Before his death, Jackson had reportedly been administered drugs such as propofol and lorazepam. The Los Angeles County Coroner declared his death a homicide, and his personal physician pleaded not guilty to charges of involuntary manslaughter. Michael Jackson's death triggered a global outpouring of grief, and as many as a billion people around the world may have watched his public memorial service on live television.