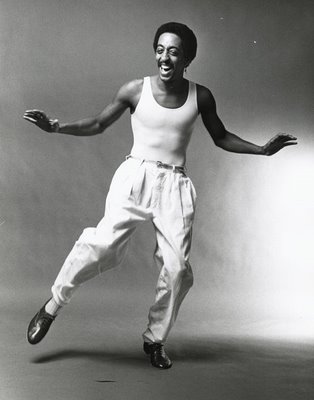 Involved in show business since he was a toddler, Gregory Hines grew up to be a highly acclaimed tap dancer, choreographer, dramatic and comic actor, singer, and director. Hines personified the art of classical tap in the 1980's and 90's. He won a Tony Award as best actor in a musical in 1992 for his portrayal of Jelly Roll Morton, the pioneering jazz composer, his fourth Tony nomination as a performer. Gregory Hines appeared in major films, including Francis Ford Coppola's ''Cotton Club,'' and ''White Nights,'' with Mikhail Baryshnikov, in which he played an American defector to the Soviet Union. He had his own sitcom, ''The Gregory Hines Show,'' on CBS in 1997 and played recurring characters on ''Will & Grace'' on NBC and ''Lost at Home'' on ABC.

Gregory Hines never forgot his dance origins and was a tireless advocate for tap in America. In 1988 he lobbied successfully for the creation of a National Tap Dance Day, now celebrated in 40 cities in the United States and in eight other nations. In his acceptance speech in 1996 for an award given him by Career Transition for Dancers at its annual benefit gala, Hines berated the gala's organizers for not including tap on the program.

Gregory Oliver Hines was born February 14, 1946, in New York, NY; he was the son of dancer Maurice Robert Hines and Alma Iola. Gregory Hines is the brother of actor and dancer Maurice Hines. When Hines was two, his father employed him in a dance act with his older brothers. Gregory Hines honed his dancing skills with master tap dancer Henry Le Tang. He was five when his father teamed him with his big brother, Jake, to form the Hines Kids. The brothers spent much of their early careers dancing at the Apollo Theater.

At age eight, Gregory Hines debuted on Broadway in the musical The Girl in Pink Tights (1954). When the boys reached adolescence, they were called the Hines Brothers. In 1963, they became Hines, Hines and Dad, and started a ten-year stint on the nightclub circuit and on television. They also went abroad.

In 1973 Gregory Hines left his family group and began performing as the lead singer and musician in a rock band called Severance in Venice, California. Severance was one of the house bands at an original music club called Honky Hoagies Handy Hangout, otherwise known as the 4H Club. In 1986, he sang a duet with Luther Vandross, entitled "There's Nothing Better Than Love", which reached the #1 position on the Billboard R&B charts.

Hines soon returned to New York and Broadway. In 1978, Gregory Hines had his first Broadway success, starring in the musical ''Eubie,'' for which he received his first Tony nomination. He followed up that success with Tony-nominated performances in ''Comin' Uptown'' (1980) and ''Sophisticated Ladies'' (1981), and had featured roles in two films that year, playing a Roman slave in his film debut in Mel Brooks's ''History of the World -- Part I'' and a coroner in ''Wolfen,'' an allegorical mystery directed by Michael Wadleigh.

Gregory Hines established himself as a first-rate actor with his portrayal of Morton, a chill, egocentric genius, in ''Jelly's Last Jam.'' He also shared a Tony nomination for choreography for that show with Hope Clarke and Mr. Levy. In 1984 Vincent Canby, then senior film critic for The Times, singled Gregory Hines out as a noteworthy performer, writing of his ''rare screen presence'' in ''The Cotton Club'' in a description that captures Mr. Hines's essence.

In 1990, Hines visited with his idol, Sammy Davis Jr., as the great entertainer lay dying of throat cancer, unable to speak. After Davis died, a choked-up Hines spoke at Davis's funeral of how Sammy had made a gesture to him, "as if passing a basketball … and I caught it." Hines spoke of the honor that Sammy thought that Hines could carry on from where he left off.

In 1994, Hines made his directorial bow with Bleeding Hearts. He released an album, simply titled Gregory Hines, in 1987. The CBS family comedy The Gregory Hines Show began in 1997, and Hines portrayed  a single father who had trouble reentering the dating scene. Though that particular series was short lived, appearances on such popular small screen staples as Will and Grace proved that the years had certainly not dulled Hines comic abilities. In addition, the perpetual entertainer also provided voice work for the Blues Clues adventure Big Blue's Treasure Hunt and the popular children's series Little Bill.

Hines died of liver cancer late Saturday, August 9, 2003, on his way to a hospital from his home in Los Angeles, California. He was 57. He was engaged to Negrita Jayde at the time of his death. He had been diagnosed with the disease more than a year earlier, but he had told only his closest friends. In addition to his father and brother, he is survived by his daughter, Daria Hines; a son, Zach; stepdaughter, Jessica Koslow; and a grandson.