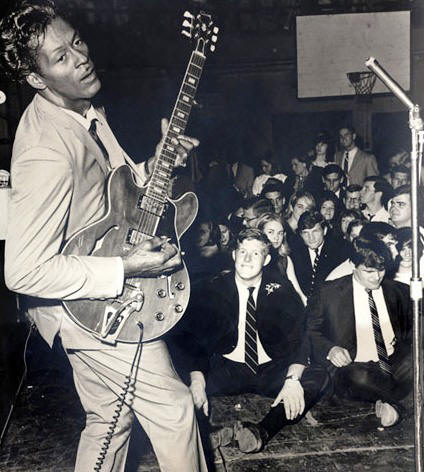 Chuck Berry is an African American guitarist, singer and songwriter. If any one individual can be credited as the premier figure of rock and roll, it's Chuck Berry. His music, lyrics, and free spirit made an indelible impression on millions of young people, including the Beatles and Rolling Stones. He celebrated the birth of rock and roll in 1955. Each year, more and more people become aware of his enormous influence. Rock 'n' roll was the beginning, however tentative, of a mass state of mind, if not a way of life. No one fully grasped what was happening, but Chuck Berry seemed to have an idea. Of all the musicians, Chuck Berry was the one who best recognized these new American kids, and he loved and encouraged them. With an extraordinary leap of empathy, Chuck Berry knew and expressed their feelings, and they understood themselves through him. His songs were hymns to a generation. Chuck Berry matched some of the most resonant and witty lyrics in pop to music with a blues bottom and a country top, trade marking the results with his signature double-string guitar lick.

Born in St. Louis, Missouri, October 18, 1926,   Chuck Berry was the fourth child in a family of six. Chuck Berry grew up in the north St. Louis neighborhood known as "The Ville", an area where many middle class St. Louis blacks lived at the time. His father was a contractor and a deacon of a nearby Baptist church, and his mother a qualified principal. In 1944, before he could graduate, Chuck Berry was arrested and convicted of armed robbery after taking a joy ride with his friends to Kansas City, Missouri. Berry attempted to commandeer a man's car at gunpoint with a non-functional pistol. Berry was released from the Intermediate Reformatory for Young Men at Algoa, near Jefferson City, Missouri on his 21st birthday in 1947.

After his release from prison, Berry married Themetta "Toddy" Suggs on October 28, 1948 and pursued a number of jobs in St. Louis, including being a hairdresser. Chuck Berry began moonlighting as a guitarist for various bands in St. Louis as an extra source of income. He had been playing the blues since his teens. In late 1952 a piano player named Johnnie Johnson called and asked Chuck Berry to play a New Year's Eve show at the Cosmopolitan Club in St. Louis. The band would play steadily at the club for the next three years. Berry's influence changed not only the band's name (to the Chuck Berry Combo) but also its style. The music was a mostly fast-paced combination of country, pop, and rhythm and blues. Berry also admired the comical sense of singer Louis Jordan, which he added to his performances.

Chuck Berry yearned to make records, and a trip to Chicago netted a two-minute conversation with his idol Muddy Waters, who encouraged him to approach Chess Records. Upon listening to Berry's homemade demo tape, label president Leonard Chess professed a liking for a hillbilly tune on it named "Ida Red" and quickly scheduled a session for May 21, 1955. During the session the title was changed to "Maybellene" and rock & roll history was born. Chuck Berry went on to have a string of top ten hits, including "Roll Over Beethoven," "Rock and Roll Music," "Johnny B. Goode," and "Carol."

Berry was also a popular live performer. He was known for his "duck walk," which he created as a child "scooting forward" under a table to chase a ball. Within a years' time, Chuck Berry had gone from a local St. Louis blues picker making 15 dollars a night to an overnight sensation commanding over a hundred times that, arriving at the dawn of a new strain of popular music called rock & roll. Berry was a mainstay on the mid-'50s concert circuit. and things went smoothly until 1961, when Berry was found guilty of transporting a teenage girl across a state line for immoral purposes. Following a blatantly racist first trial that was disallowed, he was found guilty at a second. Chuck Berry spent two years in federal prison in Indiana, leaving him embittered.

By the Time Chuck Berry was released from jail, groups such as the Beatles and the Rolling Stones were recording versions of Berry classics and introducing his music to new audiences. Rather than being resigned to the has-been circuit, Berry found himself in the midst of a worldwide beat boom with his music as the centerpiece. In the 1970s Berry toured on the basis of his earlier successes.

Chuck Berry was on the road for many years, carrying only his Gibson guitar, confident that he could hire a band that already knew his music no matter where he went. Among the many bandleaders performing a backup role with Chuck Berry were Bruce Springsteen and Steve Miller when each was just starting his career. Springsteen related in the video Hail! Hail! Rock 'n' Roll that Berry did not even give the band a set list and just expected the musicians to follow his lead after each guitar intro. Berry neither spoke to nor thanked the band after the show. Nevertheless, Springsteen backed Berry again when he appeared at the concert for the Rock and Roll Hall of Fame in 1995.

Chuck Berry altered his live act to include a passel of slow blues and quickly became a fixture on the festival and hippie ballroom circuit. After a disastrous stint with Mercury Records, Chuck Berry returned to Chess in the early '70s and scored his last hit with a live version of the salacious nursery rhyme, "My Ding a Ling," yielding Berry his first official gold record. A live recording of "Reelin' And Rockin'" was also issued as a follow-up single that same year and would prove to be Berry's final top-40 hit in both the U.S. and the UK.

By the end of the 70's, Chuck Berry was as in demand as ever, working every oldies revival show, TV special, and festival that was thrown his way. Berry had hit pay dirt, but this only led to another run-in with the law. Problems with the law and the Internal Revenue Service have plagued him through the years. Shortly before a June 1979 performance for Jimmy Carter at the White House, the IRS charged Berry with income tax evasion, and he served a 100-day prison term in 1979.

In January 1986 Berry was among the first round of inductees into the Rock and Roll Hall of Fame. The following year Chuck Berry published the at-times sexually explicit Chuck Berry: The Autobiography. That same year Taylor Hackford made a documentary film, Hail! Hail! Rock 'n' Roll, of a celebration concert for Berry's sixtieth birthday. Keith Richards was the musical leader. Eric Clapton, Etta James, Julian Lennon, Robert Cray and Linda Ronstadt, among others, appeared with Berry on stage and film. Two of the highlights in the film was a testy exchange between Richards and Berry on how to set an amplifier for a guitar, and his needling of Richards on his playing of the intro to Berry's "Oh, Carol" during a rehearsal.

When it comes down to his music, perhaps John Lennon said it best, "If you were going to give rock & roll another name, you might call it 'Chuck Berry'."