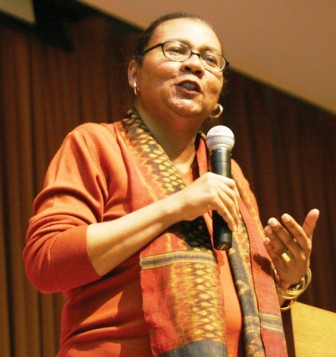 bell hooks is one of the most widely published black feminist scholars in the U.S. An outspoken cultural critic, educational theorist and professor of English, she is famous for her analyses of the politics of race, gender, class and culture, and for her attacks on what she calls the "white supremacist capitalist patriarchy." Using her pen name, bell hooks, she has written over thirty books and numerous scholarly and mainstream articles, appeared in several documentary films and participated in various public lectures. Primarily through a postmodern perspective, hooks has addressed race, class, and gender in education, art, history, sexuality, mass media and feminism.

Gloria Jean Watkins was born on September 25, 1952 in Hopkinsville, Kentucky. She grew up in a working class family with five sisters and one brother. Her father, Veodis Watkins, was a custodian and her mother, Rosa Bell Watkins, was a homemaker. Throughout her childhood, she was an avid reader.

Her early education took place in racially segregated public schools, and she wrote of great adversities when making the transition to an integrated school, where teachers and students were predominantly white. She graduated from Hopkinsville High School in Hopkinsville, Kentucky, earned her B.A. in English from Stanford University in 1973 and her M.A. in English from the University of Wisconsin–Madison in 1976. In 1983, after several years of teaching and writing, she completed her doctorate in the literature department from the University of California, Santa Cruz with a dissertation on author Toni Morrison.

Gloria Watson chose to use bell hooks as her pseudonym to honor both her grandmother, whose name she borrowed and her mother, as well as keeping her own identity separate from her writing.

She decided not to capitalize her first and last names in an attempt to place the focus on her work, rather than her name.

After high school, hooks accepted a scholarship to Stanford University, in California. Despite her full-time studies she began Ain't I a Woman at the age of nineteen. She also took a job as a telephone operator. Finding time for her writing was a challenge, but hooks found that the job offered her something she did not have in school at the time, a community of working-class, black women.

The author went through several drafts of the manuscript over the next six years before she had one that satisfied her.  At first hooks had difficullty publishing her work, and eventually she was directed to her future publisher, South End Press, while giving a talk at a feminist bookstore in San Francisco. Once published in 1981, Ain't I a Woman became a central book in discussions of racism and sexism. Eleven years later, Publishers Weekly ranked it among the "twenty most influential women's books of the previous twenty years."

Since the publication of Ain’t I a Woman?, bell hooks has become eminent as a leftist and postmodern political thinker and cultural critic. She targets and appeals to a broad audience by presenting her work in a variety of media using various writing and speaking styles. As well as having written books, she has published in numerous scholarly and mainstream magazines, lectures at widely accessible venues, and appears in various documentaries.

She is frequently cited by feminists as having provided the best solution to the difficulty of defining something as diverse as "feminism", addressing the problem that if feminism can mean everything, it means nothing. She asserts an answer to the question "what is feminism?" that she says is "rooted in neither fear nor fantasy,  'Feminism is a movement to end sexism, sexist exploitation and oppression'"

A commencement speech hooks gave in 2002 at Southwestern University was considered controversial. Eschewing the congratulatory mode of traditional commencement speeches, she spoke of government-sanctioned violence and oppression, and admonished students who went with the flow. The speech was booed by many in the audience, though "several graduates passed over the provost to shake her hand or give her a hug."

In 2004 bell hooks joined forces with Berea College in Berea, Kentucky as Distinguished Professor in Residence, where she participated in a weekly feminist discussion group, "Monday Night Feminism", a luncheon lecture series, "Peanut Butter and Gender" and a seminar, "Building Beloved Community: The Practice of Impartial Love".