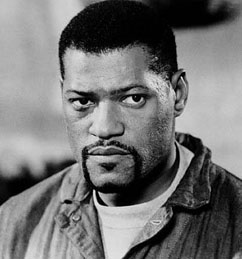 Laurence Fishburne is an American actor of screen and stage, as well as a playwright, director, and producer. Laurence Fishburne III  has established his own place in the forefront of Hollywood's African-American actors of his generation. He is perhaps best known for his roles as Morpheus in the Matrix science fiction film trilogy, and as singer-musician Ike Turner in the Tina Turner biopic What's Love Got to Do With It. He became the first African American to portray Othello in a motion picture by a major studio when he appeared in Oliver Parker's 1995 film adaption of the Shakespearean play.

Born on July 30, 1961 in Augusta, Georgia to Laurence John Fishburne, Jr. and Hattie Bell, he was raised solely by his mother in Park Slope section of Brooklyn, New York following his parents divorce not long after his birth. Upon noticing her son's natural talent in acting, Hattie subsequently encouraged the kid to be an actor and helped him to join various New York stage auditions, one of which he finally passed to encounter his first professional role at a mere age of 10.  He is a graduate of Lincoln Square Academy in New York, which closed in the 1980s.

Fishburne started acting at age twelve, getting his first job in 1973 as a short-lived member of the Mod Squad followed by portraying Joshua Hall on the ABC soap opera, One Life to Live. Fishburne's most memorable childhood role was in Cornbread, Earl and Me in which he played a young boy who witnessed the police shooting of a popular high school basketball star. Fishburne later earned a supporting role in Francis Ford Coppola's Apocalypse Now, in which he played a 17-year-old sailor nicknamed 'Mr. Clean'. When production began in March 1976 he was just fourteen, apparently lying about his age to get the part. Filming took so long that he was already seventeen upon its completion.

Fishburne spent much of the 1980s in and out of television and periodically on stage. In the early 1980s, Fishburne had a minor role in the critically acclaimed Steven Spielberg film The Color Purple. Fishburne had a recurring role as Cowboy Curtis with Paul Reubens' character, Pee Wee Herman in the CBS children's television show, Pee-wee's Playhouse. He also appeared in the M*A*S*H episode, "The Tooth Shall Set You Free", as Corporal Dorsey (billed as Larry Fishburne in the credits). In Spenser: For Hire, he was a guest star for the 2nd season episode "Personal Demons". He appeared as a thug named Cutter in Death Wish 2 (1982).

In the 1980's Laurence Fishburne's stage work included being cast in Short Eyes and Loose Ends, both produced at the Second Stage Theatre in New York. The 1990s opened up more opportunities for Fishburne when he played Jimmy Jump in the controversial King of New York. He was also cast in Boyz N The Hood. He won the Tony Award in 1992 for his stage performance in August Wilson’s play Two Trains Running. This was followed by an Emmy Award for Fishburne's role in the short-lived series TriBeCa. His first Oscar nomination was achieved for his portrayal of Ike Turner in What’s Love Got to Do With It?

With the new decade (1990s) came out-and-out stardom for Laurence. A choice lead in John Singleton's urban tale Boyz n the Hood (1991) catapulted him immediately into the front of the film ranks. Set in LA's turbulent South Central area, his potent role as a morally minded divorced father who strives to rise above the ignorance and violence of his surroundings, Laurence showed true command and the ability to hold up any film. On stage, he would become invariably linked to playwright August Wilson and his 20th Century epic African-American experience after starring for two years as the eruptive ex-con in "Two Training Running." For this powerful, mesmerizing performance, Laurence won nearly every prestigious theater award in the books (Tony, Outer Critics Circle, Drama Desk and Theatre World). It was around the time of this career hallmark that he began billing himself as "Laurence" instead of "Larry."

In 1999 Laurence Fishburne appeared at the Roundabout Theater on Broadway, playing the lead role of Henry II, in The Lion in Winter, a revival of the 1966 hit which focuses on the struggle between Henry II of France and his estranged wife, Eleanor of Acquitaine. In addition, Laurence starred in and executive produced Always Outnumbered, directed by Michael Apted from a screenplay by author Walter Mosley, for HBO.

In October of 2000, Laurence made his directorial debut, in addition to starring in and producing Once in the Life. The screenplay, which he wrote, is based on his own play Riff Raff, in which Fishburne also starred and directed in 1994. The play received critical praise and was later brought to New York's Circle in the Square Theater. The initial run in Los Angeles was the first production produced under his own banner L.O.A. Productions.

Laurence Fishburne was honored with the Harvard Foundation Artist of the Year Award in 2007 for his prowess as an actor and entertainer with humanitarian pursuits. Laurence Fishburne is also an ambassador for UNICEF, and was awarded the key to the city of Cambridge Massachusetts. “Laurence Fishburne Day” is celebrated on February 24.