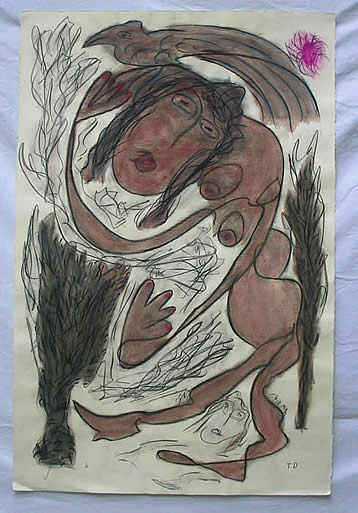 Thornton Dial has had one man shows in New York City and Houston. He is recognized as one of the greatest living self-taught artists in the United States. Dial only began seriously making art after his retirement. Thornton Dial Sr. is one of a handful of artists that will bridge the chasm of self-taught verses trained artists. His brilliant work begs the question of artistic training. Dial's work is as thoughtful, thought provoking and timeless as the best of contemporary art in the universe. Thornton Dial Sr. attended school through the fourth grade and neither reads nor writes. He is married and has three sons and two daughters. Thornton Dial worked for the Pullman Standard Company for thirty years. He did iron work, cement work, a jack-of-all- trades. He worked in and around Bessemer, Alabama, finally starting his own family business making painted steel furniture. Dial is the "patriarch" of a clan of noted folk artists including his son, Thornton Dial Jr., known as "Little Buck", and Richard Dial. “Little Buck” Dial began his artistic activity about 1986, inspired by works of art in his father’s backyard.

The paintings, sculptures, and assemblages of "Little Buck" almost always deal with social conditions and the relationships between blacks and whites or man and nature. His subject matter is often complex. such as a gorilla lending a helping hand to the United States and to the telephone company symbolizes the role of Blacks in building the country. He sometimes repeats images in a series in order to make his point. For example, one of his series uses insects as symbols of the social conditions prevailing in the black world. Another work in this group entitled "Role Model" shows a butterfly emerging from a cocoon.

Dial Sr. first came into the spotlight after being discovered and promoted by folk art collector Bill Arnett. A prolific art dealer, Arnett was virtually excommunicated from the Atlanta art scene in the mid-1980s. Arnett turned his sights to collecting art from African-American "folk artists." He became, as Morley Safer labeled him, "the king of outsider art." Because Arnett loudly promotes certain African-American vernacular artists as "better than Picasso, better than Matisse" he is often dismissed as the P.T. Barnum of the 21st century art world. Others believe he is a prescient genius who is championing an art form that is as important to the art continuum as blues and jazz were to music. Those putting Arnett in the "genius" category, in fact, compare him to Alan Lomax the white man credited with "discovering the blues."

Arnett believes there is a conspiracy afoot aimed at keeping African-American Vernacular Art out of the art history books and at destroying him, Thornton Dial and their grand, ever-evolving mission. Arnett discovered Dial's work through self taught artist, Lonnie Holley and he brought attention of Dial's work to the art world in 1987. It wasn't very long before he was discovered by the outside art world, and showing his artwork at galleries and museums, including The New Museum in New York and the Whitney Biennial.

Thornton Dial's art functions like folk tales, combining African and American traditions to tell stories that are at once personal, political, and spiritual. Dial's work is stretching the borders of both folk art and modern art.

When asked how Buck came to be an artist he replied "I didn't have no real job, so I made a job making art." In the beginning his family laughed at his paintings, he buried them and created many of his works in secrecy. Dial's work is more complex and sophisticated than the naive style so often associated with outsider art. Some of his works often incorporate materials such as rugs matted with paint, furniture and sculptural objects. With more time to make things simply for his own pleasure, Dial started constructing figurative sculptures, then branched out to painting and mixed-media assemblages.

“Thornton Dial,” a documentary produced and directed by Alabama Public Television’s Celia Carey, won The Golden Gate Award for Best TV Documentary Short Form at the 2006 San Francisco International Film Festival. The film was funded by Alabama Power and the Museum of Fine Arts, Houston. “Thornton Dial,” examines the extraordinary life and work of the artist from Bessemer, Alabama, which is sixteen miles south of Birmingham. The film also explores Southern African-American improvisational visual art, the underrated sibling of jazz, the blues and gospel.