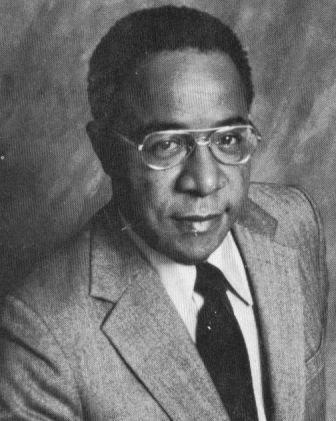 Alex Haley, an African American writer, is best known for as the author of the novel Roots: The Saga of an American Family, from which two television miniseries, Roots and Roots II, were adapted. The novels, loosely based on Haley's own family, presented an interpretation of the journey of African Americans from their homeland to the United States and their subsequent search for freedom and dignity. The novel was published in 1976, when the United States was celebrating it's bicentennial.

Alexander Murray Palmer Haley, the oldest of three sons (George and Julius), was born to Simon and Bertha  Haley on August 11, 1921, in Ithaca, New York. Six weeks after his birth, Simon and Bertha returned to Henning, Tennessee, and presented Will and Cynthia Palmer with their grandson, Alex Haley. Alex and his mother remained with the Palmers, while Simon returned to Cornell University to complete his graduate studies in agriculture.

After the death of Will Palmer in 1926, Simon Haley joined his wife and family in Henning and operated the Palmer business. In 1929, Simon Haley began his teaching career, and the family moved. Two years after they relocated, Bertha Haley died in Normal, Alabama. Simon Haley, who was left with three children, remarried two years later one of his teaching colleagues, Zeona Hatcher.

In Henning, Alex heard colorful stories told by his maternal grandmother, Cynthia Palmer, who traced the family genealogy to Haley's great-great-great-great-grandfather from the 18th century. He had always said he was an African, called "Kin-tay"; that he was brought by slave-ship to the New World and named Toby there. As Haley recalled: "The time would be just about as the dusk was deepening into the night, with the lightning bugs flickering on and off around the honeysuckle vines, and every evening I can remember, unless there was some local priority gossip, always they would talk about the same things – snatches and patches of what later I'd learn was the long, cumulative family narrative that had been passed down across the generations."

Although his parents were teachers, Haley was an indifferent student. He began writing to avoid boredom during voyages while serving in the U.S. Coast Guard. During WW II, Haley enlisted in the Coast Guard as a mess boy. He served first on the U.S.S. Murzin, a cargo-ammunition vessel, that sailed on the Southwest Pacific. At the age of 37, after twenty years of service, Haley left the Coast Guard with the rank of Chief Journalist.

Upon retiring from the Coast Guard, Haley decided to become a full-time writer and journalist. Haley began his writing career through assignments from Reader's Digest and Playboy magazine, where he conducted interviews. During this time he met Malcolm X, then one of the followers of Elija Mohamad, leader of the Nation of Islam. Later Haley was asked by Malcom X to write his life's story. The result of that collaboration, The Autobiography of Malcolm X, was published in 1965 and sold six million copies.

Two weeks after the book was completed, Haley began work on his next project, Roots. It was a fictionalized version of his own search for his ancestral past, which led him to the African village of Juffure, in Gambia. Haley described Roots as "faction," a combination of fact and fiction. Although criticized by some for taking too many liberties in the telling of his journey into his ancestral past, Haley maintained that "Roots is intended to convey a symbolic history of a people."The tale follows the life of Kunta Kinte, a proud African who was kidnapped from his village in West Africa.

After surviving the middle passage (the brutal shipment of Africans to be sold in the Americas), he was made a slave on a plantation in the United States. Haley visited archives, libraries, and research repositories on three continents to make the book as authentic as possible. He even reenacted Kunta's experience during the middle passage by spending a night in the hold of a ship stripped to his underwear.

During the last week of January 1977 the first Roots miniseries was aired by the American Broadcasting Company. Its phenomenal success surprised everyone, including Haley and the network executives who had "dumped" the program into one week, fearing the subject matter would not attract an audience. Instead Roots garnered one of the largest audiences for dramatic television in the U.S. history of the medium, averaging a 44.9 rating and a 66 share.

The success of Roots went far beyond attracting a large audience, however. The miniseries and Alex Haley, became a cause célèbre. In a cover story, Time magazine reported that restaurant and shop owners saw profits decline when the series was on the air. The report noted that bartenders were able to keep customers only by turning the channel selector away from basketball and hockey and tuning instead to those stations carrying Roots. Parents named their newborn after characters in the series, especially the lead character, Kunta Kinte.

In 1977, Haley received the Pulitzer Prize, as well as the Spingarn Medal from the National Association for the Advancement of Colored People. In 1989, Haley became the first person to receive an honorary degree from the Coast Guard Academy. The State of Tennessee honored Haley when it purchased and restored his boyhood home. Historically known as the Palmer House, the ten-room bungalow-style house is located in the small incorporated town of Henning, Tennessee, in Lauderdale County. The first state-owned historic site in West Tennessee and the first state-owned historic site devoted to African Americans in Tennessee, it was listed in the National Register of Historic Places on December 14, 1978. A state historical marker placed at the site tells of Haley's inspiration for Roots.

Other Haley publications include A Different Kind of Christmas, a 1990 book about the underground railroad, and Queen, the story of Haley's paternal ancestors. Queen was produced into a television mini-series, which first aired in the winter of 1993.