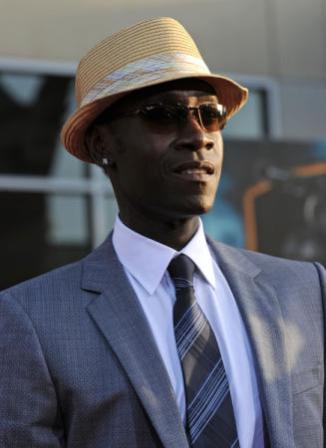 Don Cheadle is an acclaimed actor on the stage, screen and television. Cheadle rose to prominence in the late 1990s and the early 2000s for his supporting roles in the Steven Soderbergh-directed films Out of Sight, Traffic, and Ocean's Eleven. In 2004, his lead role as Rwandan hotel manager Paul Rusesabagina in the genocide drama film Hotel Rwanda earned him an Academy Award nomination for Best Actor.

Cheadle is also one of the co-founders of the non-profit organization "Not on Our Watch". It's mission is to focus global attention and resources towards putting an end to mass atrocities around the world. Drawing upon the powerful voices of artists, activists, and cultural leaders, Not On Our Watch generates lifesaving humanitarian assistance and protection for the vulnerable, marginalized, and displaced. By encouraging governing bodies to take meaningful, immediate action to protect those in harm’s way, Not On Our Watch is committed to stopping mass atrocities and giving voice to their victims. Cheadle also campaigns for the end of genocide in Darfur, Sudan, and co-authored a book concerning the issue titled Not On Our Watch: The Mission To End Genocide In Darfur And Beyond. In 2010, Cheadle was named U.N. Environment Program Goodwill Ambassador.

A native of Kansas City, Missouri, Cheadle was born on November 29, 1964, to a psychologist father and bank manager mother. During his early childhood, his family moved to Denver and then Nebraska. One thing that remained a constant in Cheadle's childhood was his interest in performing, which began around the age of five. In addition to acting, he was interested in jazz music and his parents supported both of these endeavors.

By the time he graduated from high school, he had scholarships from both music and acting schools; choosing the latter, he attended the California Institute of the Arts in Valencia. Following graduation, Cheadle made his film debut with a small role as a hamburger server in Moving Violations (1985).

Don Cheadle honed his acting skills as a guest star on television series ranging from Hill Street Blues to Night Court, and, in 1992, he landed a regular role as a fussy hotel manager on The Golden Palace. Although the show faltered after only one season, Cheadle landed on his feet, subsequently snagging the plum role of earnest district attorney John Littleton on Picket Fences (1993-1995).

While he was building a career on television, Cheadle was also earning a reputation in feature films. He first made an impression on audiences with his lead role in Hamburger Hill (1987), and, in 1994, he had his true screen breakthrough portraying Denzel Washington's best friend in Devil in a Blue Dress. So good was his performance -- which earned him a number of film critics awards -- that many felt an Oscar nomination was inevitable; when the Academy passed him over, many, including Cheadle, wondered why. However, the actor chalked it up to politics and got on with his career, working steadily throughout the remainder of the decade. 1997 proved to be a big year for him: he co-starred in three major films, Volcano, Boogie Nights, and John Singleton's Rosewood. He won particular praise for his work in the latter two films, earning nominations for SAG and Image awards.

The following year, Cheadle made a triumphant return to television with his portrayal of Sammy Davis Jr. in The Rat Pack, winning an Emmy nomination and a Golden Globe award. Also in 1998, he did stellar work in Steven Soderbergh's Out of Sight and Warren Beatty's Bulworth, playing a down and dirty ex-con in the former and a drug lord in the latter. Another Emmy nomination followed in 1999, for Cheadle's powerful portrayal of a school teacher sent in to counsel a young man on death row, in A Lesson Before Dying. Cheadle would become something of a fixture in Soderbergh's films, and in fact delivered a stunning performance as a federal drug agent in the director's epic muckraking drama Traffic (2000).

In 2005, Don Cheadle both produced and co-starred in Paul Haggis's difficult ensemble film Crash, a searing, biting meditation on racism, which was the Best Picture winner of its year.

Cheadle has also appeared in NFL commercials promoting the Super Bowl from 2002 to 2005. He so regularly appeared for the NFL in its Super Bowl advertising that in 2006, in a drive to have fans submit their own advertising ideas, the NFL sought his permission to reference his previous commercials to portray themselves as having no new ideas – "he quickly signed off on the idea and found it funny." Abe Sutton (along with Etan Bednarsh), one of the finalists in this NFL contest, played on this commercial by proposing an ad where an entire team of football players are Don Cheadle

In 2010 Cheadle, who is also an avid golfer, became the first celebrity spokesman for Dixon Golf, maker of the world's first recyclable golf ball. He has indicated his support for Dixon Golf stems from his dual passion for environmentalism and golf.