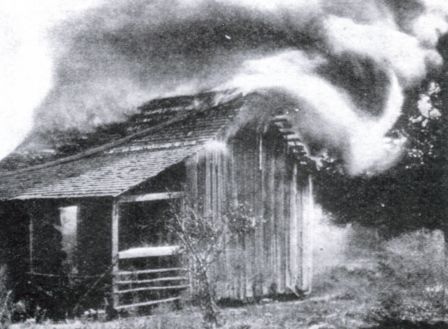 The Rosewood massacre was a violent, racially motivated conflict that took place during the first week of January 1923 in rural Levy County, Florida. At least six blacks and two whites were killed, and the town of Rosewood was abandoned and destroyed during what was characterized as a race riot. Racial disturbances were common during the early 20th century in the United States, reflecting the nation's rapid social changes, but Rosewood was the only Florida community that mob violence completely destroyed. Florida had an especially high number of lynchings in the years before the massacre, including a well-publicized incident in December 1922.

in the early 1920's the small town of Rosewood was situated just ten miles east of Cedar key and about forty miles west of Gainesville Florida. Rosewood was home to approximately 150-200 people, most African Americans. The majority of the black residents worked for the Cumner Brothers Saw Mill, the turpentine industry or the railroad.

During the winter of 1922, two events in the vicinity of Rosewood aggravated local race relations: the murder of a white schoolteacher in nearby Perry, and a Ku Klux Klan rally in Gainesville on New Year’s Eve. The murder of the schoolteacher resulted in the death of three black men, including the burning of one man at the stake on December 9, 1922.

On New Years Day in 1923, Fannie Taylor, a white woman from nearby Sumner, claimed that a black man had attacked her in her home. According to Fannie Taylor's version of events, a black male came on foot to her house that morning and knocked. When she opened the door the man proceeded to assault her. From most accounts the intruder did not consummate the act of rape, although he beat her about the head and face. Some versions of the event claimed that she was both raped and robbed.  Fannie Taylor's cries for help attracted the attention of neighbors, and her assailant fled, Although Fannie Taylor was not seriously injured and was able to describe what happened, the shock of the assault rendered her unconscious for several hours. Because no one ever disputed that some kind of physical attack took place, the incident was never referred to as an alleged attack. Many local Blacks believed the woman was lying to cover up the fact that she had quarreled with a white lover who had beat her.

Word spread quickly and a violent mob of angry white men gathered to seek revenge. Many of the white men believed Jesse Hunter, an escaped black convict was the guilty party. They incarcerated one suspected accomplice, Aaron Carrier, and lynched another, Sam Carter. The men then targeted Aaron’s cousin Sylvester Carrier, a fur trapper and private music instructor, who was rumored to be harboring Jesse Hunter. A group of 20 to 30 white men went to Sylvester Carrier’s house to confront him. They shot his dog, and when his mother, Sarah, stepped outside to talk with the men, they shot her.

Soon word spread within the white community of Sumner that two white men had been killed by blacks. The white mob quickly grew, to a group of about 200 angry white men.  The men then proceeded to rampage Rosewood, torching  buildings and slaughtering animals. The black community fled to the nearby swamp of Gulf Hammock, trying to escape the revenge seeking mob. Meanwhile the mob burned and destroyed every home, church and meeting hall of the black Rosewood residents. All that remains today is the house of John Wright, one of the few white residents in the community. Wright, a white general store owner  hid a number of black women and children in his home during the riot, and planned and helped carry out an evacuation effort.

Two local white train conductors, John and William Bryce, who knew the Rosewood’s residents, picked up many of the black women and children and took them to Gainesville. The African Americans who escaped by foot headed for Gainesville or for other cities in the northern United States. The town has remained completely deserted to this day.

The question of how many people died remains, however, and it may never be solved.  Based on contemporary evidence and accounts, there were definitely at least eight deaths, six blacks and two whites. The blacks included were Sam Carter, Sylvester Carrier, Sarah Carrier, Lexie Gordon, Mingo Williams, and James Carrier. The white men were Henry Andrews and C. P. "Poly" Wilkerson. Others who may have been killed in the fires or the swamps have never been named.

The initial report of the Rosewood incident presented less than a month after the massacre claimed there was insufficient evidence for prosecution. Thus no one was charged with any of the Rosewood murders.

Although the rioting was widely reported around the country, few official records documented the event. Survivors, their descendants, and the perpetrators remained silent about Rosewood for decades. Sixty years after the rioting, the story of Rosewood was revived in major media when several journalists covered it in the early 1980s. Survivors and their descendants organized to sue the state for having failed to protect them. In 1993, the Florida Legislature commissioned a report on the events. As a result of the findings, Florida became the first U.S. state to compensate survivors and their descendants for damages incurred because of racial violence.  In 2004, the state designated the site of Rosewood as a Florida Heritage Landmark.