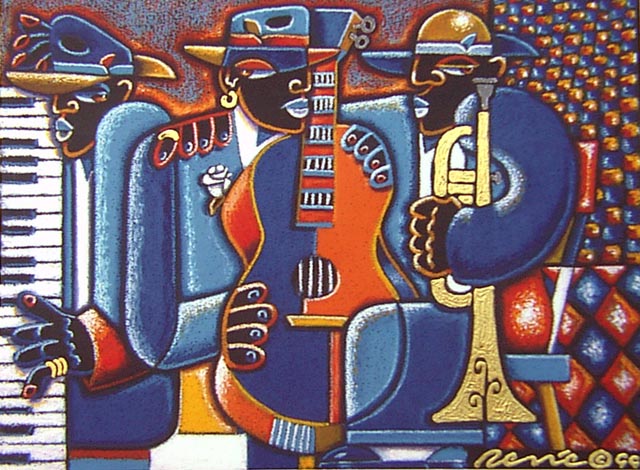 In 19th century America, race often determined who could be trained in the arts. There were no special schools or places where African-Americans could freely exhibit their talents for art. These talented artists were excluded from the academies, associations, and teaching institutions available to white artists. In rare cases, beneficent white families broke the rules and provided knowledge, direction, and resources to budding African-American talents in the visual arts. Many of these white patrons were among the abolitionists of this period in American history.

After the Civil War, a host of African-American  artists started to be recognized. From 1865 to the start of the 1920's, most of these artists produced works which could be acceptable to museums, patrons, or local salons or studios. They therefore created paintings, drawings, and sculptures in the classical and romantic traditions of scenes depicting nature, history, familiar places, distinguished personalities, and prominent families of wealth. The art world of this period was narrow, and African-American artists had to compete for recognition and earnings from pieces of art requested by their commissioners or patrons. For the most part, these African-Americans were seeking recognition and a place in the international world of art.

Southern black singers and musicians began creating and playing the blues and ragtime music. A little later the streets, nightclubs, and bars of New Orleans starting ringing with the new sound of jazz. Jazz combined the influences of both the blues and ragtime and the new sound was irresistible to both blacks and whites. Jazz sound followed the Great Migration and traveled to cities like Kansas City, Chicago, and New York.

In the early 1920's there was a movement was called the "Negro" or "Harlem Renaissance". This resurgence of literature, knowledge, and the arts coming out of New York was powerful. A fertile and acceptable door had been opened to African-American musicians, writers, poets, intellectuals, and artists. The opportunity was now available to grow and show off their best talents. From 1919 to about 1929, Harlem, New York became the capitol of cultural activity for African-Americans. This period in American history was extremely uplifting to African-Americans as a people. Personalities and individuals connected their expressions in writings, music, and visual artworks as they related to the political, social, and economic conditions of being black in America.

The early thirties saw jazz transforming into big band music, first with the swing and later with bebop. Musicians like Charlie Parker, Dizzy Gillespie, and Miles Davis pushed the envelope and made some of the greatest music ever.

The 1940's and 1950's were not easy times for African-American  artists. Only the acceptable, critically acclaimed few were able to work and produce lucrative pieces of art. Patrons of the arts were still mostly white and wealthy. Artists like the Florida "Highwaymen" found an unique way to sell and display their art, by producing in mass quantities and selling their artwork on the side of the road. Thornton Dial's art functions like folk tales, combining African and American traditions to tell stories that are at once personal, political, and spiritual. Dial's work is stretching the borders of both folk art and modern art. When asked how Buck came to be an artist he replied "I didn't have no real job, so I made a job making art." In the beginning his family laughed at his paintings, he buried them and created many of his works in secrecy.

Diversity means differences among people. It includes all of us in our rich and infinite variety. Rock and Roll was the musical blending of different cultures. Taking the blues and adding some country tradition, rock and roll roll artist like James brown and Chuck Berry rocked the music industry like never before. A new sound called soul quickly emerged and found a home in Detroit under the Motown label. Ray Charles, The Jackson 5, and the Supremes were all huge hit makers for Motown and the blues and funk music were popular with both black and whites races internationally.

In all African American culture has grown from a deep well of influence including West Africa, the Caribbean, the American South, and the large urban centers of the United States. African American actors, directors, authors, artist and musicians have helped to create a diverse American talent that has greatly enhance the lives of both black and white Americans on a daily basis.