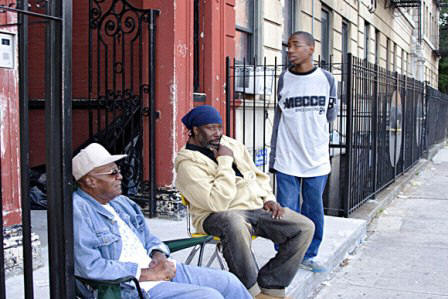 During the first half of the 20th century, the largest internal population shift in U.S. history took place. Starting about 1910, through the Great Migration over five million African Americans made choices and "voted with their feet" by moving from the South to northern cities, the West and Midwest in hopes of escaping political discrimination and hatred, violence, finding better jobs, voting and enjoying greater equality and education for their children. In the 1920s, the concentration of blacks in New York led to the cultural movement known as the Harlem Renaissance, whose influence reached nationwide. Writers Zora Neale Hurston, Langston Hughes, Nella Larsen, Claude McKay and Richard Wright; and artists Lois Mailou Jones, William H. Johnson, Romare Bearden, Jacob Lawrence and Archibald Motley gained prominence.

The South Side of Chicago, a destination for many on the trains up from Mississippi, Arkansas and Louisiana, became the black capital of America, generating flourishing businesses, music, arts and foods. A new generation of powerful African American political leaders and organizations also came to the fore. Membership in the NAACP rapidly increased as it mounted an anti-lynching campaign in reaction to ongoing southern white violence against blacks. Marcus Garvey's Universal Negro Improvement Association and African Communities League, the Nation of Islam, and union organizer A. Philip Randolph's Brotherhood of Sleeping Car Porters all were established during this period and found support among African Americans, who became urbanized. These changes moved African American workers  from farmers into skilled trades and gave them a voice in Metropolitan elections.

Escaping from Jim crow laws and the inequality of the South, black Americans had high hopes for their new lives in America's big cities like Cleveland, Detroit, Chicago, and New York. However city life came with its fair share of difficulties too. Finding housing was difficult and many times blacks were banned from living in white neighborhoods. Wages for blacks were seldom the same as the wages for a white man doing the same job and promotions to management were difficult and unlikely. Working conditions in the big city was often dangerous and unhealthy.

The Second Great Migration was the migration of more than 5 million African Americans from the South to the other three regions of the United States. It took place place from 1941, through World War II, and lasted until 1970. This migration was much larger and of a different character than the first Great Migration (1910–1940). Some historians prefer to distinguish between the movements for those reasons.

In the Second Great Migration, more than five million African Americans moved to cities in states in the North, Midwest and West, including many to California, where Los Angeles and Oakland offered many skilled jobs in the defense industry. More of these migrants were already urban laborers who came from the cities of the South. They were better educated and had better skills than people who did not migrate.

Compared to the more rural migrants of the period 1910-1940, many African Americans in the South were already living in urban areas and had urban job skills before they relocated. They moved to take jobs in the burgeoning industrial cities and especially the many jobs in the defense industry during World War II. Workers who were limited to segregated, low-skilled jobs in Southern cities were able to get highly skilled, well-paid jobs at California shipyards.

By the end of the Second Great Migration, African Americans had become an urbanized population. More than 80 percent lived in cities. Fifty-three percent remained in the Southern United States, while 40 percent lived in the Northeast and North Central states and 7 percent in the West

Living in large inner cities allowed African Americans to be part of a large extended culture. It also gave them a large voting block when they were finally able to vote without harassment. Prior to 1967, no major United States city had elected a black mayor since a number of southern cities did so during Reconstruction. Then, a combination of circumstances came together. Many blacks had been migrating to large cities since the turn of the century. A civil rights movement swept the country, knocking down barriers to black electoral participation, conducting massive voter registration drives, and raising the level of black consciousness. Meanwhile, many white residents headed for the suburbs, leaving inner city populations with a much higher percentage of African Americans.

Since 1970, the number of black mayors has risen from just 81 to 480. And during the past three decades, these men and women have proven that they can successfully, and effectively, run cities of all sizes, whether they have large black populations or not.