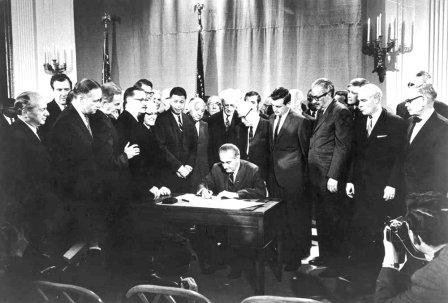 The 15th Amendment to the Constitution granted African American men the right to vote by declaring that the "right of citizens of the United States to vote shall not be denied or abridged by the United States or by any state on account of race, color, or previous condition of servitude." Although ratified on February 3, 1870, the promise of the 15th Amendment would not be fully realized for almost a century. Through the use of poll taxes, literacy tests and other means, Southern states were able to effectively disenfranchise African Americans. It would take the passage of the Voting Rights Act of 1965 before the majority of African Americans in the South were registered to vote.

After the Civil War ended, the newly reunited nation passed several amendments allowing the newly released slaves more rights than ever before, supposedly equal with those of white citizens. First, the 13th Amendment abolished slavery, as well as forced servitude, and continues to prohibit these practices. Second, the 14th Amendment made slaves and their descendents complete citizens of the United States, and gave them the same rights as every other citizen in America. Lastly, the 15th Amendment prohibited voter discrimination based on race, color, and heritage. Together, these were known as the Reconstruction Amendments.

Although people could not legally prevent others from voting based on color, there was nothing included about gender. Even after African-American males got the right to vote, women of both colors were unable to do so. Finally, in 1920, the 19th Amendment gave women suffrage.

Despite the passage of the 15th amendment, political manuevers, particularly in the South, disenfranchised black voters by instituting poll taxes, literacy tests, and grandfather clauses. Because these were unfair and borderline illegal, people rebelled against these practices, which lead to President Lyndon Johnson signing the National Voting Rights Act of 1965. This act made the discrimination against black voters completely illegal. The Civil Rights Movement worked tirelessly to make sure these anti-discrimination laws became standard practice instead of the exception to the rule. Making sure African American voters do not become disenfranchised is an ongoing goal and requires vigilance in both the South and metropolitan areas through out the country.

Working to change the laws of 1890, which disenfranchised black voters in Mississippi, civil rights leaders worked to help register black voters and to build community organizations that could win a share of political power in the state. Old laws, with provisions such as poll taxes, residency requirements, and literacy tests, made registration  complicated and stripped blacks from the polls. After so many years, the intent to stop blacks from voting had become part of the culture of white supremacy. In the fall of 1961, SNCC organizer Robert Moses began the first black voting project in McComb and the surrounding counties in the Southwest corner of the state. Their efforts were met with violent repression from state and local lawmen, White Citizens' Council, and Ku Klux Klan resulting in beatings, hundreds of arrests and the murder of voting activist Herbert Lee.

In the Spring of 1962, with funds from the Voter Education Project, SNCC/COFO began voter registration organizing in the Mississippi Delta area around Greenwood, and the areas surrounding Hattiesburg, Laurel, and Holly Springs. As in McComb, their efforts were met with fierce opposition—arrests, beatings, shootings, arson, and murder. Registrars used the literacy test to keep blacks off the voting roles by creating standards that even highly educated people could not meet. In addition, employers fired blacks who tried to register and landlords evicted them from their homes. Over the following years, the black voter registration campaign spread across the state.

The 1965 Voting Rights Act created a significant change in the status of African Americans throughout the South. The Voting Rights Act prohibited the states from using literacy tests, interpreting the Constitution, and other methods of excluding African Americans from voting. Prior to this, only an estimated twenty-three percent of voting-age blacks were registered nationally, but by 1969 the number had jumped to sixty-one percent.