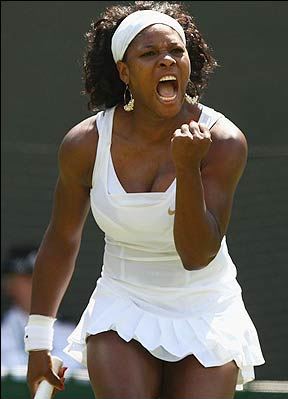 While some African Americans were fighting for civil rights, others had already been immersed in breaking barriers in the sporting world.  Sport is not just about athletic endeavors, but is human interaction played out in a way that only sport allows it to happen. Nationalism, state supremacy, college glory, and a city's pride in its pro teams, all create an environment whereby the people cajole the team as much as the individual; thus, the need to win over rides one's skin color.

Throughout American history Black athletes have been such a distinct and integral part of the Black social fabric that our lives have been greatly influenced and enriched by their triumphs and near triumphs. From the courage and determination of Jackie Robinson to the class and resolve of Althea Gibson to the confidence and cockiness of Muhammad Ali to the flash and style of Florence Griffith Joyner, they are all elements included in a package called greatness.

Boxing great Henry Armstrong hammered away at discrimination in the 1930s and 1940s by refusing to fight in segregated arenas. Students at New York University launched a protest in 1940 against racial discrimination in collegiate athletics that gained national recognition and support to eradicate the color line in intercollegiate sports.

Between 1903 and 1946 players with black skin, including Cubans, Latin Americans, and African Americans, were banned from organized baseball. Forming the Negro baseball league, black athletes played professional baseball on all black teams, and this league employed some of the greatest baseball players in the history of the game. The Negro National League was formed in 1920 by Andrew "Rube" Foster, and had teams in Chicago, Dayton, Detroit, Indianapolis, St. Louis, and Kansas City. It was here that players like Josh Gibson of the Pittsburg Crawford's flourished. Gibson was often referred to as the black Babe Ruth and hit more than 71 home runs in 1931. Although records are sketchy for the Negro League it is widely believed Gibson hit over 1,000 home runs in his career.  In 1947 Jackie Robinson broke the color line to become the first black player in major league baseball.

A lot of people are familiar with the old Negro Baseball Leagues, but less have heard about the African American basketball teams known as “the Black Fives”, named after the starting five players. Since the 1891 start of U.S. basketball, white-owned, professional sports leagues excluded black athletes. African Americans formed their own  professional basketball teams, showcasing their competitive talents, despite racism.  From 1907 through the 1920s, black teams competed for “the Colored Basketball World Championship.” In the 1940s, a handful of black players were signed by white minor teams, and in 1948, Don Barksdale won a gold medal at the London Olympic Games as the first African-American player on a U.S. Olympic basketball team.  Chuck Cooper and Sweetwater Clifton came into the National Basketball Association in 1950.

Even from its inception in 1920, the American Professional Football Association had comparatively few African-American players; a total of nine black people suited up for NFL teams between 1920 and 1926. Fritz Pollard and Bobby Marshall were the first black players in what is now the NFL in 1920. Pollard became the first black coach in 1921. However, after 1926, all of these black players disappeared from the subsequent National Football League; several teams were kicked out of the league that year, and with a large number of available, talented white players, black players were generally the first to be removed, never to return again. For the next few years, a black player would sporadically pop up on a team: Harold Bradley played one season with the Chicago Cardinals in 1928, and David Myers played for two New York City-based teams in 1930 and 1931. In 1933, the last year of integration, the NFL had two black players, Joe Lillard and Ray Kemp. Both were gone by the end of the season. Only three of the ten NFL teams (the Rams, Detroit Lions and New York Giants) signed a black player before 1950. The Green Bay Packers followed in 1950, but the bulk of NFL teams did not sign a black player until 1952, by which point every team but the Washington Redskins had signed a black player..