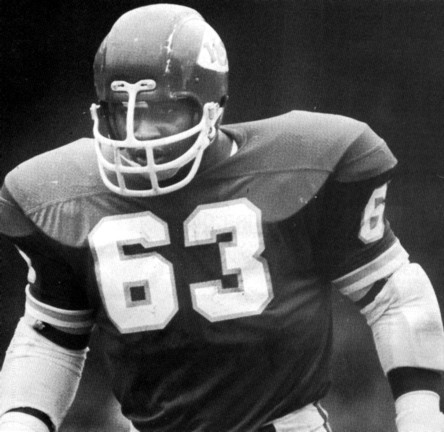 Willie Lanier intercepted 27 passes for 440 yards and was named to six Pro Bowls, along with being the defensive star of Super Bowl IV when the Chiefs upset the Green Bay Packers.

As the first African-American to start at middle linebacker, he not only was a true pioneer but also the key man on one of the National Football League's strongest defensive teams. A member of the College Football Hall of Fame, Willie Lanier wore number 65 in college and number 63 in the pros. He was enshrined in the Pro Football Hall of Fame in 1986.

Willie Edward Lanier was born August 21, 1945 in Clover Virginia. He attended Maggie Walker High School in Richmond, Virginia. Upon graduation, Lanier had planned to attend Virginia State University, study business administration, and find a job somewhere in central Virginia. Professional football was not a part of this original plan. However, Lanier, seeing a more racially tolerant environment in the North, decided that he would rather attend Morgan State University, in Baltimore, Maryland.

Lanier called Earl "Papa Bear" Banks, the football coach at Morgan State University in Baltimore, telling Banks he wanted to enroll at Morgan State and play football. "He told me there was no scholarship available, and I told him I wasn't asking for a scholarship," Lanier recalls. "I told him I just wanted to go to school there." Skeptical, Banks told Lanier he'd have to take an entrance exam. Lanier boarded a Greyhound bus in Richmond, went to Baltimore, took the exam and scored in the top 10 percent of the entering freshman class. Paying his tuition with student loans and a work program, Willie Lanier was a walk on football player, eventually earning a scholarship after all. Lanier became an immediate impact player for the Bears, being named Small College All American his junior and senior years. Lanier was also chosen MVP of the Tangerine Bowl.

At 6-1 and 245 pounds, Willie Lanier presented an awesome image to any quarterback who lined up against him. He become known and respected for his ability to track down enemy ball carriers and devastate them with the force of his tackles.  in 1967 Kansas City was looking to strengthen their defense and Hank Stram picked Lanier in the second round, after the team had selected another linebacker, Jim Lynch of the Notre Dame Fighting Irish.

Lynch had been chosen to play in the annual College All-Star game, forcing him to miss the first two weeks of Chiefs ' practice. By the time Lynch made it to camp, Lanier had already established himself as the team's middle linebacker, and the American Football League had another first, the first black middle linebacker in pro football history.

In the midst of a solid first season, Lanier suffered an injury and missed the last four games of the year. In the seventh game of his rookie season, Willie Lanier  suffered a severe concussion after a violent collision with a Denver Broncos ball carrier. "I was not only afraid my career might be over," he said, "but even worse, that my life might not be normal again." From then on, Lanier wore a specially padded helmet and adopted a "careful" approach to his play. His new approach must have worked, as he missed only one game in the next 10 seasons.

One of Lanier's best-remembered defensive stands came in a 1969 AFL playoff game against the New York Jets. The Chiefs were clinging to a 6-3 lead when the Jets got a first down on the Kansas City 1-yard line. Three times the Jets challenged Lanier and three times they failed. The Chiefs went on to win 13-6 and advanced to Super Bowl IV, where they upset the Minnesota Vikings 23-7.

Willie Lanier was All-Pro, All-AFL or All-AFC every year from 1968 through 1975. He was elected to the last two AFL All-Star games following the 1968 and 1969 seasons, and the first six AFC-NFC Pro Bowl games after the merger. He was the defensive MVP in the 1971 Pro Bowl. For a defensive player, he also did well statistically.

Except for his first and last seasons, Willie Lanier intercepted at least two passes every year and wound up with 27 thefts, which were returned for 440 yards and two touchdowns. He also recovered 18 fumbles.

The linebacking trio of Lanier, Lynch and fellow Hall of Famer Bobby Bell is recognized as one of the most talented in professional football history, lasting until the arrival of new head coach Paul Wiggin in 1975. Lanier was traded in April 1978 to the Baltimore Colts, but retired just three months later as training camp was set to get under way.