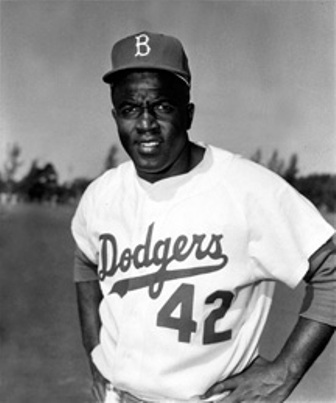 Jackie Robinson was the first African-American major-leaguer. With his help, the Brooklyn Dodgers won 6 pennants in his ten seasons. Honored internationally as the central figure in baseball's "Noble Experiment," Jack Roosevelt Robinson, known in the world of baseball as Jackie Robinson, took the first steps toward integrating the sport's major league teams when he signed a contract to play with the Brooklyn Dodgers in 1947.

Jack Roosevelt Robinson was born in Cairo, Georgia in 1919 to a family of sharecroppers. His mother, Mallie Robinson, single-handedly raised Jackie and her four other children. They were the only black family on their block, and the prejudice they encountered only strengthened their bond.

In 1935, Robinson graduated from Washington Junior High School and enrolled at John Muir High School. Recognizing his athletic talents, Robinson's older brother Mack, who was himself an accomplished athlete and silver medalist at the 1936 Summer Olympics, inspired Jackie to pursue his interest in sports. At Muir Tech, Robinson played several sports at the varsity level and lettered in four of them: football, basketball, track, and baseball. He played shortstop and catcher on the baseball team, quarterback on the football team, and guard on the basketball team. With the track and field squad, he won awards in the broad jump. He was also a member of the tennis team, winning  in the junior boys singles championship in the annual Pacific Coast Negro Tennis Tournament in 1936.  That same year Jackie Robinson earned a place on the Pomona annual baseball tournament all-star team, which included future Hall of Famers Ted Williams and Bob Lemon. In late January 1937, the Pasadena Star-News newspaper reported that Robinson "for two years has been the outstanding athlete at Muir, starring in football, basketball, track, baseball and tennis."

At UCLA, Jackie Robinson became the first athlete to win varsity letters in four sports: baseball, basketball, football and track. In 1941, he was named to the All-American football team. Due to financial difficulties, he was forced to leave college, and eventually decided to enlist in the U.S. Army. After two years in the army, he had progressed to second lieutenant. Jackie's army career was cut short when he was court-martialed in relation to his objections with incidents of racial discrimination. In the end, Jackie left the Army with an honorable discharge.

After the Army, Jackie Robinson accepted an offer from his old friend and pastor Rev. Karl Downs to be the athletic director at Sam Huston College in Austin. The job included coaching the school's basketball team for the 1944–45 season. As a fledgling program, few students tried out for the basketball team, and Robinson even resorted to inserting himself into the lineup for exhibition games. Although his teams were outmatched by opponents, Robinson was respected as a disciplinarian coach, and drew the admiration of, among others, Langston University basketball player Marques Haynes, a future member of the Harlem Globetrotters.

Robinson began playing professional baseball in the Negro Leagues, but he was soon chosen by Branch Rickey, a vice president with the Brooklyn Dodgers, to help integrate major league baseball. Rickey interrogated Robinson extensively for three hours on August 28, 1945. In a dramatization of hotel, restaurant, and game situations, he glared at Robinson, shouting demeaning words and phrases while observing his reactions. At the end he quoted the Biblical passage that advises turning the other cheek. Satisfied that Robinson met the tests of ability, stamina, and tolerance, Rickey exacted a promise of extreme patience and forbearance for three years, then offered him a contract. On October 23, 1945, Rickey made the historic announcement that Jackie Robinson, a black man, would play for the Montreal Royals, the minor league affiliate of the Brooklyn Dodgers. Satchel Paige gave a ringing endorsement of Robinson as the best possible selection for "The Noble Experiment."

Moving to Florida in 1946 to begin spring training with the Royals, Jackie Robinson played his first game on March 17, 1945. At the end of one year with the Montreal Royals, the Brooklyn Dodgers brought Robinson up from the minors to open the 1947 season. The team won the league title and Robinson finished with a .297 batting average, a league-leading 29 stolen bases, and the title of Major League Rookie of the Year.

Robinson soon became a hero of the sport, even among former critics, and was the subject for the popular song, "Did You See Jackie Robinson Hit That Ball?" An exceptional base runner, Robinson stole home 19 times in his career, setting a league record. He also became the highest-paid athlete in Dodgers history, and his success in the major leagues opened the door for other African-American players, such as Satchel Paige , Willie Mays, and Hank Aaron.

Robinson also became a vocal champion for African-American athletes, civil rights, and other social and political causes. In July 1949, he testified on discrimination before the House Un-American Activities Committee. In 1952, he publicly called out the Yankees as a racist organization for not having broken the color barrier five years after he began playing with the Dodgers.

Jackie Robinson's induction into baseball's Hall of Fame in 1962 was a cause of celebration for black people around the world. He chose his wife, Rachel, his mother, Mallie, and his friend, Branch Rickey, to flank him in the Cooperstown award ceremony. This highest possible recognition of Robinson's skill and service was a symbol of victory to African Americans in the continuing struggle against injustice.