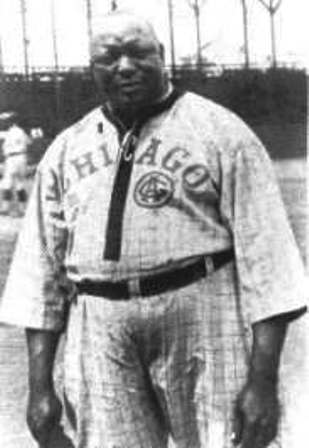 Andrew "Rube" Foster organized the Negro National League, the first long lasting black baseball league in the United States, which operated from 1920 to 1931. A player, coach and manager, Foster was inducted into the Baseball Hall of Fame in 1981. Foster, considered by historians to have been perhaps the best African-American pitcher of the 1900s, also founded and managed the Chicago American Giants, one of the most successful black baseball teams of the pre-integration era.

Andrew Foster was born in Calvert, Texas on September 17, 1879. His father, also named Andrew, was a reverend and elder of the local American Methodist Episcopal Church. Foster grew to be a large man, standing almost six foot-three inches, and weighing over 200 pounds. In 1897 Rube Foster began his professional baseball career with the Waco Yellow Jackets, an independent black team. Rube Foster's size provided him with a great fastball, but he was equally feared for his outstanding screwball. Both black and white fans enjoyed watching Rube Foster pitch and in 1902 he was signed with the top ranked Chicago Union Giants by Frank Leland. His rookie year for the Giants was a good one and Foster won over 50 games for his team that year.

Foster earned the nickname "Rube" by outpitching white star Rube Wadell in a 1902 exhibition game. Now he was becoming known as black baseball's first great impresario. In 1903 Foster was the top black pitcher in the country. He pitched the Cuban X-Giants to the black championship, and was the winner in four of their five victories over the Philadelphia Giants in the Black World Series. The following year, he pitched the Philadelphia Giants to the title, and recorded both victories in a best-of-three series against the Cuban X-Giants.

Most of Rube Fosters records are hard to verify. The Black teams were traveling teams at the time and would pretty much play anyone, anytime they could get a game. One thing that can't be disputed is the fact that everyone respected and admired Rube Foster and most claimed he was the smartest pitcher they faced.

Foster began managing in 1907, when he guided the Chicago Leland Giants to a 110-10 record. Their record was 64-21-1 in 1908. In 1909 Foster challenged the Chicago Cubs to a series, which the Cubs won in three close games. Foster pitched the second game and took a 5-2 lead into the ninth inning, but lost 6-5. Mordecai Brown won the first and third contests. There is no record of any major league club coming forth to answer Foster's challenge in 1910, when his team went 123-6.

In 1920, Foster, Taylor, and the owners of six other Midwestern clubs met in the spring to form a professional baseball circuit for African-American teams. Foster, as president, controlled league operations, while remaining owner and manager of the American Giants. He was periodically accused of favoring his own team, especially in matters of scheduling and personnel. Rube Foster seemed able to acquire whatever talent he needed from other clubs, such as Jimmie Lyons, the Detroit Stars' best player in 1920, who was transferred to the American Giants for 1921, or Foster's own younger brother, Bill, who joined the American Giants unwillingly when Rube forced the Memphis Red Sox to give him up in 1926.

His critics believed he had organized the league primarily for purposes of booking games for the American Giants. With a stable schedule and reasonably solvent opponents, Foster was able to improve receipts at the gate. It is also true that when opposing clubs lost money, he was known to help them meet payroll, sometimes out of his own pocket.

Rube Foster's American Giants won the new league's first three pennants, before being overtaken by the Kansas City Monarchs in 1923. In the same year the Hilldale Club and Bacharach Giants, the most important eastern clubs, pulled out of an agreement with the NNL and founded their own league, the Eastern Colored League (ECL). The ECL raided the older circuit for players, Foster's own ace pitcher Dave Brown among them. Eventually the two leagues reached an agreement to respect one another's contracts, and to play a world series.

The first Negro World Series, played between the two leagues, was in 1924 between the Kansas City Monarchs of the National League, and the Philadelphia Hilldales representing the Eastern League. The Monarchs won the series in ten games. The star pitcher of the Series was a black Cuban named Jose Melendez, whom the Major League's John McGraw had said he would gladly pay $50,000 for Melendez's services, if only he were white.

In 1926 Rube Foster suffered a nervous breakdown and was committed to an insane asylum. His beloved league collapsed in 1930, partly due to the Great Depression, but mainly from the loss of its leader. In 1981, Foster was elected to the National Baseball Hall of Fame. He was the first representative of the Negro leagues elected as a pioneer or executive. On December 30, 2009, the U.S. Postal Service announced that it plans to issue a pair of postage stamps in June honoring the Negro leagues baseball, and featuring Foster on one of the stamps.