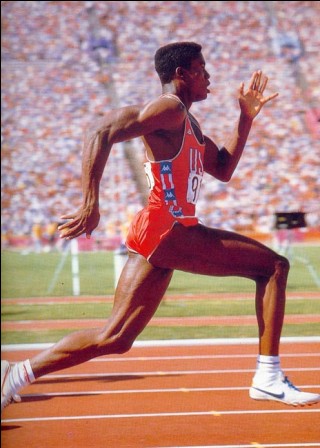 Frederick Carlton Lewis was born in Birmingham Alabama on July 1, 1961, the son of two star athletes. His father, Bill, ran track and played football, while his mother, Evelyn, was a world-class hurdler who represented the United States at the 1951 Pan-American Games. By the time Carl, the third of four children, was born, his parents were coaching young athletes in track and field events.

After graduating from high school in 1979, many colleges tried to recruit Lewis, and he chose to enroll at the University of Houston where Tom Tellez was coach. Except for his father in Carl's youth, Tellez would be Carl Lewis’ only coach for his entire career. Carl Lewis dedicated himself to track and field, and even though the sport was nominally amateur, he intended to make a living from it. Lewis once stated “I want to be a millionaire and I don’t ever want a real job." During his career he played a role in pushing athletics from an amateur sport to purely professional. Qualifying for the 1980 Olympics in Moscow, Carl Lewis was one of the many athletes disappointed when the United States boycotted the event because of the Soviet's invasion of Afghanistan.

By 1981 Carl Lewis was ranked number one in the world in the 100 meters as well as the long jump. Two years later, he won the 100 meter, 200 meter and long jump at the U.S. national championships, the first person to achieve this triple since Malcolm Ford in 1886. The 1984 Summer Olympics was a time for Carl Lewis to shine. Meeting Jesse Owens as a child, it had always been a goal of his to equal Jesse Owens feat of four gold medals in a single Olympic, and in 1984 Carl Lewis did just that, gaining gold in the 100m, 200m, long jump and 4x100m relay. It was a remarkable achievement, though to Carl's disappointment it didn't lead to the endorsements and popularity he might have hoped for. There was some criticism for this decision to forego his last 4 long jump attempts to focus on other events. Many hoped he would break Bob Beamon's record as well as win gold.

By the end of 1984, Carl Lewis was awarded top rank in the 100 meter and the long jump and was additionally ranked number one in the 200 meter. For the third year in a row Lewis was also awarded the Athlete of the Year title. In 1987 Carl Lewis went on to win gold at the World Championships. Sadly Carl's father passed away from cancer during the year, and to honor him Carl Lewis had the Olympic gold medal for the 100 meter race he had won in 1984 buried with his father. The loss of his father made Lewis even more determined to win gold again in the upcoming 1988 Olympics in Seoul.

Carl Lewis also had a heated rivalry with fellow track star Ben Johnson and both press and fans were anxious to see the outcome of the 100 meter run. The sprint soon became one of the most hyped events of the season. At the end of the race, Ben Johnson emerged out as the winner with 9.79 s, a new world record while Lewis set a new American record with a clocking of 9.92 s finishing second. However, three days later, Johnson tested positive for steroids and Lewis was awarded the gold medal, along with the new Olympic record. By 1992 Carl Lewis had won eight world championship gold medals and had owned the long jump for ten years. Now 31, age had began to be a factor for Lewis.

He watched Mike Powell break Bob Beamon's outdoor long jump world record at the 1991 world championships in Tokyo, Japan. Later at the 1992 Olympic trials, Lewis failed to make the cut for the 100-meter and 200-meter sprints. He did qualify for the long jump and the 400-meter relay, which meant another trip to the Olympics in Barcelona, Spain in 1992. With admiring fans cheering him on, Carl Lewis beat Powell in the long jump to earn his seventh gold medal and then anchored the 400-meter relay for his eighth. Carl Lewis would have one more shot at the Olympics.

By 1995 he was being beaten regularly by younger athletes, but after participating in the 1996 Olympic trials Lewis won an opportunity to compete in the long jump at the games in Atlanta, Georgia. He easily won his fourth straight gold in the event, winning the same event in four consecutive Olympic Games. After Lewis retired from athletic competition in 1997, he went on to do promotional work, along with a small amount of acting. In 2009 Carl Lewis was named the Goodwill Ambassador for the United Nations Food and Agriculture Organization.