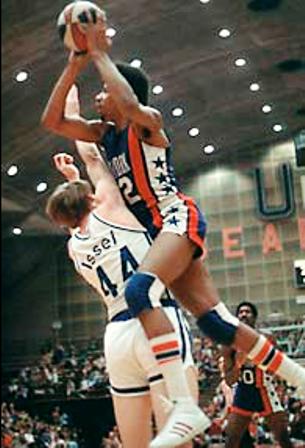 Nicknamed, Dr. J., Julius Erving is a basketball Hall of Famer and was a dominating player of his era, changing the way the game was played. A wizard with the ball, Julius Erving performing feats like midair spins and whirls punctuated by powerful slam dunks. Erving was one of the first players to make extemporaneous individual expression an integral part of the game, setting the style of play that would prevail in the decades to follow. His modern style of playing emphasized leaping and play above the rim.

Julius Erving won three championships, four Most Valuable Player Awards, and three scoring titles while playing with the ABA's Virginia Squires and New York Nets and the NBA's Philadelphia 76ers. He one of the ten highest scorer in professional basketball history, with 30,026 points (NBA and ABA combined). He is well-known for slam dunking from the free throw line in Slam Dunk Contests.

Julius Erving was born in Hempstead, Long Island. His father left the family when Julius was only three and his mother worked as a domestic to support her three children. The family lived in a public housing project, and life was difficult, but Mrs. Erving worked to instill a sense of self-worth in her children, and young Julius realized his gift for basketball could be a ticket to a better life. By age ten, Julius was averaging eleven points a game with his Salvation Army team. When Julius Erving was 13, his mother remarried, and the family moved to the nearby town of Roosevelt. There, Julius maintained a high academic average and played on the high school team, all-county and Long Island teams competing in state-wide tournaments. Erving acquired the nickname "the Doctor" while still at Roosevelt High. His teammates would later alter this to "Dr. J."

Following high school Julius Erving won a scholarship to the University of Massachusetts in 1968, where he averaged 26.3 points and 20.2 rebounds over the course of short-lived yet illustrious NCAA career. At the university, he played on the school’s varsity team for two seasons, averaging more than 26 points and 20 rebounds per game.

Leaving his senior year to turn pro in 1971, Erving played for the Virginia Squires, a team in the American Basketball Association (ABA) league. With the Squires, he scored more than 27 points per game in his first season. But it was the move to the New York Nets in 1973 that allowed Erving to really shine. He helped the team win the ABA championships in 1974 and 1976 and received the league’s Most Valuable Player award for each of those seasons. His graceful spins, dramatic jump shots, and powerful slam dunks earned Erving lots of attention and a large fan base, often considered  to be one of the league’s leading players. In his five ABA seasons, Erving won two championships, three MVP trophies, and three scoring titles.

By 1975, a handful of ABA teams had folded or were struggling to meet payroll demands and the league was consolidated into one division for its final, tumultuous season. At midseason, the folks who had introduced the red, white and blue ball and the three-point shot unveiled the first All-Star Game Slam-Dunk Championship. Erving easily walked away with the title. Widely regarded as the greatest player of his time, he is often considered to have been the main catalyst for the ABA-NBA merger in 1976.

With the ABA now defunct, the Nets, San Antonio Spurs, Denver Nuggets, and Indiana Pacers were absorbed into the NBA for the next season, with the rest of the ABA players dispersed in a draft. On the eve of the 1976 season, Julius Erving was locked in a salary dispute with the Nets. When it couldn't be resolved, New York sold him for $3 million to the Philadelphia 76ers only 24 hours before the start of the season.

Julius Erving quickly became the leader of his new club and led them to an exciting 50-win season. By all accounts, Erving was playing at a higher level than the rest of the league.

In 1980 Julius Erving was one of two active players named to the NBA 35th Anniversary All-Time Team. For the 1979-80 season, Erving averaged 26.9 points, his highest NBA scoring average and ranked fourth in the league. The Sixers  began a concerted four-year assault on the NBA Playoffs. After a 59-23 regular season, Philadelphia easily took the Eastern Conference crown. In a hotly contested NBA Finals against the Los Angeles Lakers, Erving was spectacular as the teams split the first four games.

In Game 4 Erving made the legendary "Baseline Move" that would go down as one of the most spectacular shots in NBA history. First he drove past defender Mark Landsberger along the right baseline and left his feet on that side of the backboard with a layup in mind. His route to the rim was quickly blocked by Abdul-Jabbar's outstretched arms. Erving brought the ball back down and just continued to float, seemingly forever, passing behind the backboard while appearing to glide slightly to the left in midair. He finally cleared all the way to the other side of the hoop, reached back in toward the court and put up a soft, underhanded scoop for the score.

Julius Erving retired in 1987 at the age of 37, after playing 11 seasons with the Philadelphia 76ers. After his retirement Erving was named to the NBA's 50th Anniversary All-Time team and in 1993 was inducted into the Basketball Hall of Fame. In 2004, he was inducted into the Nassau County Sports Hall of Fame. His signature dunk was the "slam" dunk, since incorporated into the vernacular and basic skill set of the game, in the same manner as the "cross-over" dribble and the "no look" pass.