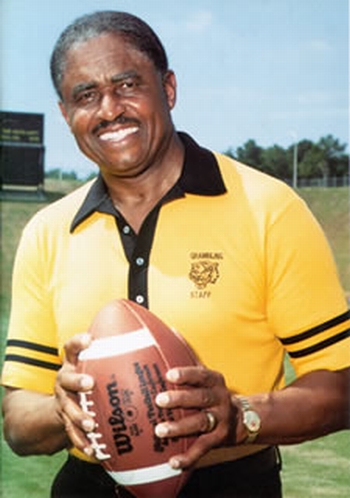 Eddie Robinson is known as the giant of college football, especially among historically Black Colleges and Universities.  Starting his coaching career at Grambling in 1941, he coached at the institution until his retirement in 1997. Eddie Robinson won 17 championships in his conference (SWAC), held the championship title 9 times for Black Colleges and  established a staggering streak of 27 consecutive winning seasons from 1960 through 1986. During his tenure, Robinson established himself as the "winningest coach in college football history", becoming the first coach to record 400 wins. Robinson retired with a record of 408 wins, 165 losses and 15 ties. More than 200 of Eddie Robonson's players went on to play in the National Football League including Super Bowl XXII MVP, Redskins quarterback Doug Williams, who would ultimately succeed Robinson as Grambling's head coach in 1998.

Eddie Robinson started coaching before coaches were CEOs, when they were still educators. Like many coaches of his day, he coached multiple sports and saw himself as a teacher. In his autobiography Eddie Robinson stated "The most important thing in football is the boy who plays the game, you can't coach 'em unless you love 'em."

Born April 13, 1919 in Jackson Louisiana, Edward Gay Robinson  was the son of a sharecropper and a domestic worker. Eddie Robinson graduated from McKinley Senior High School in Baton Rouge in 1937. Neither of Coach Robinson’s parents graduated from high school, but they encouraged their son’s desire to stay in school and earn a college degree. A young Robinson moved on from high school to become a star quarterback at Leland College under Reuben Turner, a Baptist preacher who introduced Robinson to the concepts of a playbook and coaching clinics. Robinson was a member of Alpha Phi Alpha, the first intercollegiate Greek letter fraternity established for African Americans.

Robinson would later go on to obtain his Master's degree from the University of Iowa in Iowa City in 1954.

With no coaching opportunities available following college, Robinson took a job in a Baton Rouge feed mill before learning from a relative that there was an opening for a football coach at Louisiana Negro Normal and Industrial Institute, later to become Grambling State University. After an interview with school president Dr. Ralph Waldo Emerson Jones, Robinson was chosen as the sixth head football coach of the Tigers in 1941.

While at Grambling, Eddie Robinson held several jobs other than Football coach, including teaching at Grambling High School, and coaching the girls' basketball team during World War II. His girls team lost the state championship by only a point. He also coached boys' basketball, baseball, directed band and was in charge of the cheerleaders, with a budget of $46.

Coach Rob, as he was lovingly called took full command of his team. He had a hands on approach to coaching, interacting with all players at every position. By his third season as head coach Eddie Robinson's team posted a perfect 9-0 season with the team going undefeated, untied, and unscored upon. Grambling was only the second collegiate team to have shut out every opponent, a feat which has not been repeated since. "Eddie's early teams could have competed with anybody at any level," said Bill Hayes, the former coach at Winston-Salem State and North Carolina A&T. "He had the best players in the Southland."

By 1949, Grambling’s football program was receiving national acclaim after former Tigers running back Paul “Tank” Younger signed with the Los Angeles Rams of the National Football League, becoming the first player from a historically black college to be taken in the NFL.

In 1955, Grambling had it's best record in school history. At 10-0 they claimed the National Black College Championship, outscoring opponents by a 356-61 margin. After picking up his 100th career coaching victory against Bethune-Cookman in 1957, Coach Robinson and his Tigers joined the Southwestern Athletic Conference (SWAC) in 1959. The following season he led the Tigers to the first of 17 SWAC titles under his guidance.

In 1984, Coach Robinson was poised to become college football’s winningest coach. After surpassing Amos Alonzo Stagg’s 314 coaching victories that year, he tied legendary Alabama coach Paul “Bear” Bryant’s 323-win mark with a 23-6 win over Oregon State before becoming the career wins leader the next week with a 27-7 win over Prairie View A&M. Robinson retired in 1997 with an overall record of 408 wins, 165 losses and 15 ties.