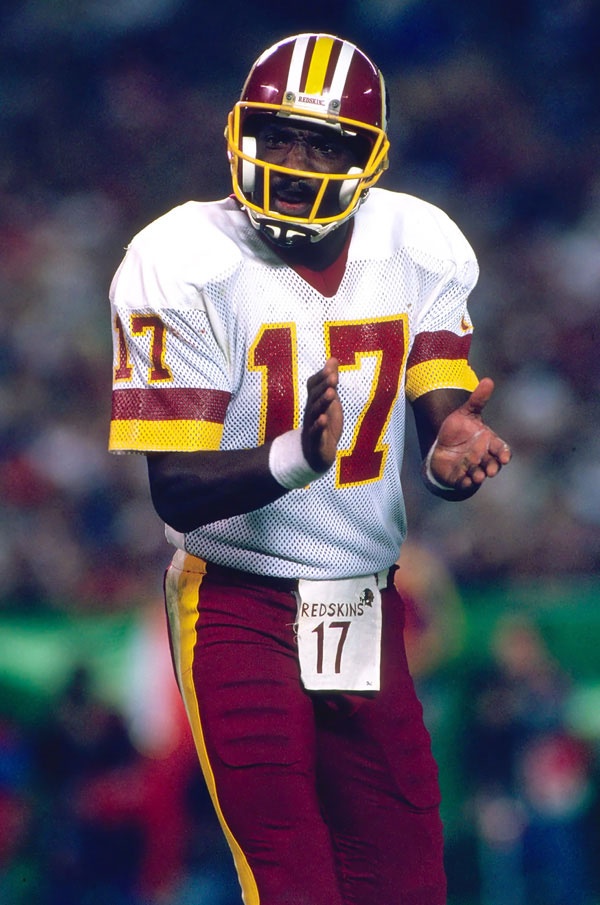 Doug Williams was the first African American  quarterback to win MVP in a Super Bowl. As quarterback for the Washington Redskins football team, he not only helped win the game, but was named the Most Valuable Player in Super Bowl XXII on Jan. 31, 1988 in San Diego, California.

Born Douglas Williams on August 9, 1955, in Zachary, Louisiana, he is the son of Robert  and Laura Williams. The sixth of eight children, Doug Williams grew up in a poor but happy family. A multi-talented athlete, Doug Williams began playing football at the young age of seven, and soon deserted baseball and basketball for his true love on the grid iron. While playing quarterback at Chaneyville High School, he amassed 1,180 yards in the air and twenty-two touchdowns in his senior year. Despite his strong numbers, few colleges were looking for a black quarterback in the early 1970's. But Eddie Robinson, the coach at the historically black Grambling State University was always on the lookout for great black football players. He recognized Doug Williams' talent and offered a scholarship that Doug quickly accepted in 1973.

Red shirted his freshman year, Doug Williams soon put up impressive numbers as the quarterback for Grambling. His starting record of 36-7 was impressive enough to make him a finalist in the Heisman Trophy chase. Winning the SWAC conference in both 1974 and 1977, Doug Williams guided by the great Coaching of Eddie Robinson made the NFL sit up and take notice. Williams still holds school records for most passing yards in a season (3,286), yards in a career (8,411), career completions (484), touchdown passes in a game (7), season (38) and career (93).

The Tampa Bay Buccaneers selected Williams in the first-round of the NFL Draft in 1978. Over a five-year tenure there, he would lead the Buccaneers to their first three playoff appearances in team history, an appearance in the 1979 NFC championship game and Tampa's first-ever NFC Central title. But Williams had a nasty contract dispute with late owner Hugh Culverhouse and left for the since-disbanded United States Football League.

Williams quickly signed with one of the USFL's expansion teams, the Oklahoma Outlaws. He would lead his team in passing completing 261 out of 528 passes for 3,084 yards and threw 15 touchdowns, yet he also threw 21 interceptions, ending up with a passer rating of 60.5, during his team's dismal 6-12 season. In 1985, when his team moved to Arizona and fused with the Arizona Wranglers to become the Arizona Outlaws, Williams showed some improvement, completing 271 out of 509 passes for 3,673 yards with 21 touchdowns and 17 interceptions, ending up with a 76.4 passer rating. However, his Outlaws' just missed the playoffs with an 8-10 record. When the USFL disbanded in 1986 Doug Williams returned to the NFL.

Returning to the NFL, Doug Williams joined the Washington Redskins in 1986. Playing for head coach Gibbs, who had previously been his offensive coordinator at Tampa Bay, he blossomed as a quarterback. At first playing back up for Jay Schroeder, Williams was given a shot when Schroeder was injured and easily led the team to victory against the rival Philadelphia Eagles. In 1987 Williams still struggled for playing time, but at the end of the season, when the Redskins had qualified for the playoffs, Doug Williams, with his 94.0 passer rating, was chosen as the starter.

Doug Williams realized a dream come true and was set to lead his team to Super Bowl XXII against the AFC  Denver Broncos, becoming the first black quarterback to start and play in a Super Bowl.

Facing legendary Denver Broncos quarterback John Elway, Williams engineered a 42-10 rout, in which the Redskins set an NFL record by scoring five touchdowns in the second quarter. Williams completed 18 of 29 passes for 340 yards, with four touchdown passes. Doug Williams was the first (and still only) black quarterback to win the Super Bowl, along with being the first African American to be named MVP at the Super Bowl.

Gone forever were the misconceptions about an African-American's ability to master the complex strategies of an NFL offense. In a locked-up environment where most blacks had been automatically converted to receiver or cornerback, Williams knocked the door off its hinges that day in 1988, setting a new mark for passing yards in an NFL title match." The thing about a Super Bowl is," Williams said, "they may call you a black quarterback, but the truth is that they can't color that experience."

Retiring as a player in 1989, Doug Williams began his coaching career and excelled on the high school level as head coach and athletic director at Pointe Coupee Central High School in LaBarre, Louisiana in 1991, and in 1993, he was head coach at Northeast High School in his hometown of Zachary, Louisiana, where he guided the team to a 13-1 record and the state semifinals. Becoming a college and pro scout for various teams, Williams received his first college head coaching job at Morehouse College in 1997.