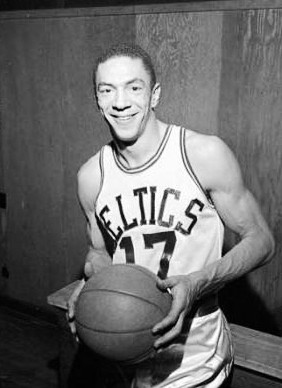 Born in Oakland, California, Don Barksdale attended nearby Berkeley High School, where the basketball coach cut him from the team for three-straight years because he wanted no more than one black player. Barksdale honed his playing skills in park basketball and then played for two years for Marin Junior College, across San Francisco Bay, before earning a scholarship to UCLA.

The first Africa American to make the Olympic team, Barksdale and his 1948 teammates won the gold medal in London. It was basketball's second appearance as a medal sport, appearing as an indoor competition for the first time after poor weather disrupted the matches at the 1936 Berlin Games. The event, for men only, was contested by 23 nations split into four pools for the preliminary round; the top two in each pool advanced to the quarterfinals with the other teams entering playoffs for the minor placings. The United States and France reached the final which was won by the Americans 65-21 to claim the gold medal. This was the second of the United States seven consecutive gold medals in Olympic men's basketball.

The 1948 Olympic team had five Kentucky Wildcats basketball players who had just won the very first Wildcat national championship in the 1948 NCAA Men's Division I Basketball Tournament. The rest of the Olympic team, consisting of the AAU Champions Phillips 66ers, and the Kentucky team later scrimmaged on Stoll Field in front of 14,000 spectators, the largest crowd to watch basketball in Kentucky at that time. Barksdale became the first African-American to play against Kentucky in Lexington. He could not stay at the hotel with the rest of the team, but instead stayed with a black host family.

When Walter Brown of Boston formed the Basketball Association of America in 1946, the league's rules banned African-American players. So when professional basketball slammed its door in Don Barksdale's face after his All American UCLA career, he switched gears toward his other passion and became the San Francisco Bay Area's first African American disc jockey, while playing AAU basketball.

The lanky 6'-6" Don Barksdale played four years of AAU ball with the Oakland Bittners before the ban on blacks in the NBA was lifted. In 1949 the Bittners won the AAU national championship, breaking the 66ers streak of six consecutive titles. In 1950 the team had a new sponsor, but the Oakland Blue 'n Gold Atlas still had Don Barksdale, though they ended up losing the national championship game to the Phillips 66ers. He was named AAU All American in 1948, 1949 and 1950.

In 1951, the twenty eight year old Barksdale joined the Baltimore Bullets, becoming the third black player to sign an N.B.A. contract. A year earlier, Chuck Cooper joined Boston and Earl Lloyd signed with Washington. One of the  top players on that team, Barksdale averaged 12.6 points per game his rookie year and 13.8 points his second year with the team. In 1953, while with the Bullets, he became the first African American to appear in an NBA All-Star Game.

In 1953, Don Barksdale was traded to the Boston Celtics where he played another two  years, until his career was cut short by ankle injuries. Through Barksdale's basketball-playing years, he was also starting a career in radio broadcasting. In 1948, he became the first black radio disc jockey in the San Francisco Bay Area. He also worked in television and owned a beer distributorship. He became the first African-American beer distributor in the Bay Area. He became the first African American television host in the Bay Area with a show called Sepia Review on KRON-TV.

In 1983, Don Barksdale launched Save High School Sports Foundation, which is credited with helping to save Oakland school athletic programs from collapse. Don Barksdale succumbed to throat cancer in 2007 at the age of 69.