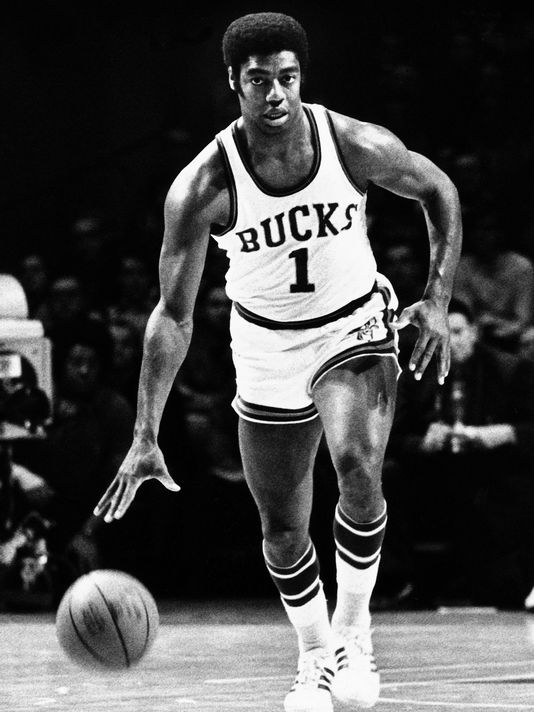 Oscar Robertson, nicknamed "The Big O" or O-Train, was a 6-foot-5, 220-pound  guard for the Cincinnati Royals and the Milwaukee Bucks. A twelve-time All-Star, eleven-time member of the All-NBA Team, and one-time winner of the MVP award in fourteen professional seasons, Oscar Robertson is the only player in NBA history to average a triple-double for an entire season. He was a key player on the team which brought the Bucks their only NBA championship in the 1970-71 season.

Oscar Palmer Robertson was born November 24, 1938 in Charlotte, Tennessee. Living in the projects, he not only learned basketball but also learned firsthand about racial discrimination and economic inequality. Robertson took up basketball as a child because it required no money and special equipment to play. Not even owning a basketball, he learned how to shoot by tossing tennis balls and rags bound with rubber bands into a peach basket behind his family's home.

As a teen, Oscar Robertson attended Crispus Attucks High School, a segregated all black school in Indianapolis. It was a poor school that even lacked a gym. At Crispus Attucks, Robertson was coached by Ray Crowe, who was obsessed with teaching the basics of the game. During his high school career, The Big O averaged 24.0 points and was named Indiana's "Mr. Basketball" as a senior. The team went 31-1 in 1955 and 31-0 in 1956, winning a record 45 games in a row between the two seasons. For both seasons they took home the state titles, bringing home Indianapolis's first-ever state championships. Even in victory the sting of racism was felt for Oscar Robertson and his teammates. Fear of the all black team tearing up the town in celebration caused city leaders to force Crispus Attucks to have their celebration party outside the city limits.

After his graduation that year, Robertson enrolled at the University of Cincinnati, where he found great success on the court that was once again shadowed by blatant racism. Averaging a whopping 33.8 points per game in college, the third highest average in history, Oscar Robertson was unstoppable. Three times he won the national scoring title, was an All-American, and was named College Player of the Year. "The Big O" led the Bearcats to two Final Fours and an 79-9 record during his three varsity seasons. As a sophomore Robertson once scored 56 points in a tournament game at Madison Square Garden, and he scored 62 points in another contest during the same year.

Only the University's fifth black player, Robertson had the difficult task of being a leader and teammate on a team that was unable to fully accept him because of his race. Road trips were especially difficult for Robertson who was forced to stay in college dorms while his teammates stayed in nice hotels.

Co-captains on the gold medal-winning 1960 U.S. Olympic basketball team, Robertson and Jerry West entered the 1960 NBA Draft. Robertson was selected to the Cincinnati Royals as a territorial pick, while West went to the Lakers, who were moving from Minneapolis to Los Angeles. Robertson, the poor boy from the projects signed his first NBA contract for $33,000 per year.

It would only take until Robertson's second year for him to achieve true NBA stardom. In 1961-62, the year he averaged a triple-double, Robertson led the Royals to the first of six straight trips to the playoffs. He repeated as assists champion with 11.4 per game and a total of 899, smashing yet another record. The sharpshooting Robertson also finished fourth in field goal percentage (.478), and his average of 12.5 rebounds per game was a career high. Success did not follow the Royals to the playoffs, however; they were dumped in the first round by the Detroit Pistons, three games to one.

No other player excelled in as many ways as Robertson did. Basketball watchers marveled at his hardworking style of play. Knicks guard Dick Barnett once said: "If you give him a 12-foot shot, he'll work on you until he's got a 10-foot shot. Give him 6, he wants 4. Give him 2 feet and you know what he wants? That's right, man, a layup." Red Auerbach joked that after telling his players to stretch out their fingers extra wide while defending Robertson, "Oscar shot the ball through their fingers!"


Before the 1969-70 season, near the end of Robertson's peak as a player, the Royals brought in Bob Cousy as head coach. Cincinnati had missed the playoffs two years in a row, and attendance was suffering. To draw fans and generate some excitement, the 41-year-old Cousy even put on a uniform and played seven games in the backcourt with Robertson.

In early 1970 the Royals stunned the basketball world by trading Robertson to the Milwaukee Bucks for Flynn Robinson and Charlie Paulk. Theories attempting to explain the trade abounded. Many observers believed it was Cousy's jealousy of Robertson that led to the trade. "The Big O" had just broken many of Cousy's records and Cincinnati was suddenly too small for the both of them. "Whatever his reasons were," Robertson later said, "I think he was wrong and I'll never forget it." Fans up and down the Ohio River mourned.

At age 31 and still searching for an NBA Championship, Robertson was now on the same team with second-year center Abdul-Jabbar. With Abdul-Jabbar winning the scoring title and the MVP Award, Milwaukee posted the NBA's best record in 1970-71 at 66-16. Robertson played in all but one game and tallied 19.4 points, 8.2 assists, and 5.7 rebounds per contest. In post season play, Milwaukee breezed by the San Francisco Warriors and Los Angeles to reach the NBA Finals against the Baltimore Bullets, winning  in four games, the first Finals sweep in 12 years.

With a championship ring Oscar Robertson had made one of his biggest dreams come true. He continued to play for the Bucks until his legs began to feel the wear and tear, retiring after the game 7 loss to the Boston Celtics in the 1974 playoffs. It was an emotional end to one of the most remarkable careers in the history of American sport. "The Big O" had single-handedly redefined the role of the basketball guard, laying the foundation for players such as Magic Johnson. No one, however, may match Robertson's overall greatness.

As third President of the NBA Players Association from 1965 until his retirement in 1974, Robertson changed the game, and the balance of power in professional sports.  In 1970 he filed a class action anti-trust lawsuit on behalf of his colleagues, seeking to prevent an NBA merger with the American Basketball Association until issues regarding the reserve clause, the draft, and other restrictions on player movement were resolved. As a result of a 1976 settlement known as the Oscar Robertson Rule, NBA players became the first to gain free agency. Instead of destroying the game, as the owners had claimed it would, the settlement ushered in a new era of growth and prosperity for the NBA which continues to the present day.

Oscar Robertson was inducted into the Basketball Hall of Fame in 1980, and was voted one of the 50 Greatest Players in NBA History in 1996. The United States Basketball Writers Association renamed their college Player of the Year Award the Oscar Robertson Trophy in his honor in 1998. For his achievements in both college and professional basketball, Oscar Robertson was named "Player of the Century" by the National Association of Basketball Coaches in 2000, and he was one of five people chosen to represent the inaugural National Collegiate Basketball Hall of Fame class in 2006.

In 1997 The Big O performed the assist of a lifetime when he donated a kidney to his daughter Tia, who was suffering from lupus. Since that point, he has been an outspoken advocate for health and wellness, kidney disease prevention and organ transplantation on behalf of the National Kidney Foundation.