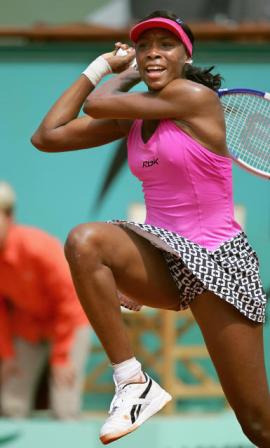 Venice Williams dominated professional tennis in 2000 and became the first African American woman to win Wimbledon since Althea Gibson on in 1958.  The 6' 1" tennis phenom shattered records by winning singles titles at Wimbledon, the U.S. Open and the Sydney Olympics, and winning doubles titles at Wimbledon and Sydney with her younger sister Serena. After her breakthrough 2000 campaign she was named "Sportswoman of the Year" by Sports Illustrated magazine. In 2001 Venus Williams repeated as Wimbledon and U.S. Open champion and she won again at Wimbledon in 2005, 2007 and 2008.

Venus Ebony Starr Williams was born June 17, 1980 in Lynwood, California to Richard Williams and Oracene Price. She is the second youngest of Oracene's five daughters and the older sister of Serena Williams. The Williams family moved from Compton, California to West Palm Beach when Venus was ten so that she could attend the tennis academy of Rick Macci. Marci, who spotted the exceptional talent of the sisters, could provide additional coaching for the young girls.

Richard Williams stopped sending his daughters to national junior tennis tournaments when Venus Williams was eleven and her younger sister Serena was ten. His decision was based partly on racial problems the girls had to suffer, claiming he had heard parents of white players talk about the Williams sisters in a derogatory manner during tournaments. Their father was also concerned that they maintain as normal a childhood as possible, and wanted them to still have time to be "little girls".

At that time he pulled the sisters, Venus Williams had a 63–0 record on the United States Tennis Association junior tour and was ranked No. 1 among under 12 players in Southern California. In 1995, Richard pulled his daughters out of Macci's academy, and from then on took over all coaching at their home.

Already well-known in tennis circles at age 14, Venus Williams turned professional on October 31, 1994. In the second round of her first professional tournament, the Bank of the West Classic in Oakland, Williams was up a set and a service break against World No. 2 Arantxa Sánchez Vicario before losing the match.

When Venus Williams made her debut in professional women's tennis in 1994, the New York Times' Robin Finn called her "the most unorthodox tennis prodigy her sport has ever seen." Three years later, the seventeen-year-old, six-foot-two-inch athlete was an international celebrity: photographs of Williams with the beads in her corn-rowed hair clicking through the air, her face a study in determination as her racket smacked the ball to her opponent, were some of the most memorable of the 1997 tennis season.

In 2000 Venus Williams won Wimbledon, becoming the first African-American female since Althea Gibson to do so. Both sisters also won the doubles' becoming the first set of sisters to do so. When the two faced off in the Wimbledon singles' semifinals, it had been over 100 years since a sibling showdown. In the same year, Williams also won two Olympic gold medals in singles and doubles with her sister, Serena, as her partner. She continued the success of her first Grand Slam by winning the U.S. Open in 2000.

After a stellar 2000 season, Williams needed to prove to the tennis world that she was going to continue to win championships. The first step on that road was to defend her Wimbledon title. Which she did to the amazement of most. Next in line was to defend her U.S. Open title. She battled it out through the semi-finals, until she met her opponent for the final, her sister, Serena. Both sisters made precedent yet again by being the first set of sisters to play against each other in U.S. Open history. Venus defeated Serena, winning her second back-to-back grand slam tournament game.

Finally, in March of 2002, Williams reached the ultimate goal, earning the number one ranking from the Women's Tennis Association. In an interview with Jet she said, "I'm very excited about this achievement and look forward to building on it. I have worked hard for it. I hope I can keep it. But my priority is the Grand Slams."

Venus Williams supports many social causes and speaks to many children on the value of an education. She participates in tennis clinics for would-be tennis players. Regarding the game of tennis, however, she does concede some recognition of her own ability. "I never thought anyone was better than me," she told Finn in the New York Times when she was still ranked No. 211. "Once you do that, you lose," she added.

Venus Williams has won numerous honors and awards, including: being named Ms. Women of the Year (along with Serena), by Ms. Magazine in 2001. She was also named Female Player of the Year by Tennis Magazine.

Venus Williams expanded outside of tennis by designing a clothing line for clothing company Wilsons The Leather Experts. She has inked deals with not only Reebok, but also Wrigley gum, makeup giant Avon, and Nortel Networks. Many have criticized Williams for not being focused on tennis, including tennis legend, Martina Navritolova, who was quoted in Time as saying her outside interests shows "arrogance and lack of commitment to tennis."

In July 2008 Venus won her fifth Wimbledon singles title and the appropriately named Venus Rosewater Trophy. She joins Martina Navratilova and Steffi Graf as the only ladies in the Open-era to have won five or more Championships.

With 49 singles titles, Williams trails only Serena among active players on the WTA Tour. Her 35-match winning streak from the 2000 Wimbledon Championships to the 2000 Generali Ladies Linz tournament final is the longest since January 1, 2000. She is also one of only three active WTA players to have made the finals of all four Grand Slams, along with Serena and Maria Sharapova

Williams began her 2018 season at the Sydney International where she was the second seed and received a first-round bye. In the second round she lost to Angelique Kerber, who went on to win the tournament. As the fifth seed and defending finalist at the Australian Open, Williams lost in straight sets to Belinda Bencic in the first round, ending her streak of seven consecutive appearances in the second week of the Grand Slams.