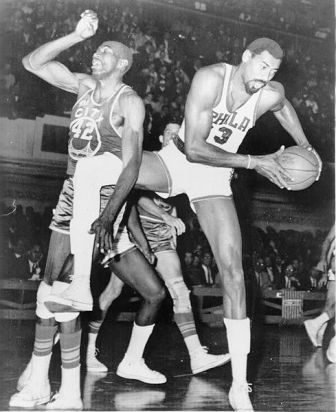 Wilton “Wilt” Chamberlain is regarded as one of the best basketball players of all time. He is known for his skills on the court, his 7’1” frame, and his statistical achievements made throughout his career. Known by his many nicknames including Wilt the Stilt, the Big Dipper, and Chairman of the Boards, Wilt Chamberlain was the only player in NBA history to score 100 points in a single basketball game.

William Norman Chamberlain was born on August 21, 1936. At the age of 10 Wilt Chamberlain was already standing 6 feet tall. In his early years, Chamberlain was not interested in basketball, because he thought it was "a game for sissies". Instead, he was an avid track and field athlete. Wilt Chamberlain began drawing attention as a basketball player while still in high school at Overbrook in Philadelphia, which he attended from 1951-1955. Now grown to a height of 6 foot 11 inches, Chamberlain easily stood out among his peers. During his junior and senior years he led his team to victory at the City Championships. Throughout the first 16 games during his senior year Chamberlain scored an astounding 800 points and became high school All-American. He scored a total of 2,252 points while playing basketball in high school.

During summer vacations, Wilt Chamberlain worked as a bellhop in Kutsher's Hotel. Red Auerbach, the coach of the Boston Celtics, spotted the talented teenager there and had him play 1-on-1 against Kansas University standout and national champion, B. H. Born, elected the Most Valuable Player of the 1953 NCAA Finals. Chamberlain won 25–10. Born was so dejected that he gave up a promising NBA career and became a tractor engineer, stating "If there were high school kids that good, I figured I wasn't going to make it to the pros". Auerbach wanted Chamberlain to go to a New England university, so he could draft him as a territorial pick for the Celtics, but Chamberlain wasn't ready to make that commitment.

With almost every college basketball team in the nation wanting Wilt Chamberlain to play for them, the offers were widespread and sometimes extreme. UCLA offered Chamberlain the opportunity to become a movie star, the University of Pennsylvania wanted to buy him diamonds, and Chamberlain's high school coach Mosenson was even offered a coaching position if he could persuade the center. In the end Chamberlain decided on Kansas University. Wilt Chamberlain was shocked when he first arrived in Kansas. In Philadelphia he had already been treated like a star, but in segregated  Kansas, there were places he was not even allowed to enter.

On December 3, 1956, Chamberlain made his varsity debut. In his first varsity game, the center scored 52 points and grabbed 31 rebounds, breaking both all-time college records in a 87–69 win against the Northwestern team of future NBA team mate Joe Ruklick. During his first varsity season, Wilt Chamberlain led the Jayhawks to the finals of the NCAA tournament, losing to North Carolina in double overtime. During his college career Wilt Chamberlain averaged over thirty points per game and was twice selected to All-American teams. After completing his junior year in college Chamberlain decided to quit college and become a professional. The problem was that NBA teams required you to complete your senior year before you were eligible to play.

In 1959 Chamberlain joined the NBA's Philadelphia Warriors and made an immediate impact on the league. He could score almost at will. Opposing teams gave up trying to stop him and instead tried only to contain him. His scoring average during the 1959-60 season was 37.9 points per game, more than eight points per game higher than anyone else had ever scored in the history of the league. He was named both Rookie of the Year and Most Valuable Player, the first person to receive both awards in the same season.

For the next six seasons Chamberlain led the league in scoring. In the 1961-62 season he averaged 50.4 points and scored 100 points in one game. In 1962-63 he averaged 44.8 points per game. Chamberlain was simply one the greatest scoring machines in the history of basketball.

Wilt the Stilt Chamberlain had his best career in 1962, averaging 50.4 points per game. The following year Chamberlain relocated to the San Francisco Warriors and scored a recording crushing 100 points in a regulation game against the New York Knicks. His team later lost at the NBA finals to the Celtics and his greatest rival Bill Russell. Chamberlain made 36 out of 63 field goals and 28 out of 32 free throws. In 1964, Chamberlain returned to play for the Philadelphia 76ers, where he won his first NBA title. They beat out the Celtics in the play-offs and went on to defeat the San Francisco Warriors in the championships. The team was later described as one of the best in NBA history. Chamberlain received his fourth and final MVP award during the 1967-68 season.

After his retirement in 1974, Wilt Chamberlain explored other opportunities. He published his autobiography, Wilt: Just Like Any Other 7-Foot Black Millionaire Who Lives Next Door in 1973. He tried coaching for a time, and was a popular pitchman for commercials. Chamberlain later branched out in acting, appearing in the 1984 action film Conan the Destroyer with Arnold Schwarzenegger.

One of the many interesting facts about Wilt Chamberlain was his claim that he's slept with 20,000 women. Never married, it was common knowledge among his close friends that Wilt had a very active sexual life, but that claim was shocking to the world and many have discussed and analyzed his statement. Another interesting fact about him is that the "Chairman of the Boards" never fouled out in his 14-year career.

Passing away in 1999, Wilt Chamberlain left behind a strong legacy in basketball. Chamberlain holds numerous official NBA all-time records, including being the only player in NBA history to average more than 40 and 50 points in a season or score 100 points in a single NBA game. He also won seven scoring, nine field goal percentage, and eleven rebounding titles, and once even led the league in assists. Although suffering a long string of professional losses, Chamberlain had a successful career, winning two NBA titles, earning four regular-season Most Valuable Player awards, the Rookie of the Year award, one NBA Finals MVP award, and being selected to 13 All-Star Games and ten All-NBA First and Second teams. Wilt Chamberlain inducted into the Basketball Hall of Fame in 1978, elected into the NBA's 35th Anniversary Team of 1980, and chosen as one of the 50 Greatest Players in NBA History of 1996.