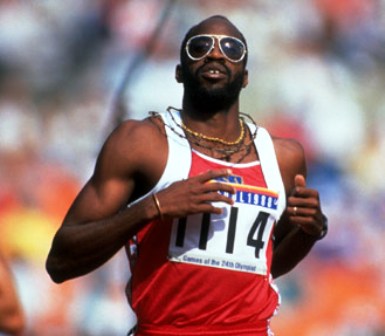 Edwin Moses won two Olympic gold medals, one in Montreal in 1976 and one in Los Angeles in 1984, along with a bronze in Seoul in 1988. He would almost certainly have won a third gold, but for the American boycott of the 1980 Olympics in Moscow.

For a remarkable nine years, nine months and nine days, Edwin Moses remained invincible in the 400 meter hurdles, being unbeaten in 122 consecutive races (107 finals). Bounding over the 10 three-foot obstacles, he took an unprecedented 13 steps in between the hurdles instead of the usual 14. His unforgettable style remains the ultimate demonstration of power, speed, and elegance.

In 1983 he broke the world record for the fourth time in Koblenz, Germany, with a time of 47.02, a mark which stood for the next nine years. During his track career he won three World Cup titles and two World-Championships.

Edwin Corely Moses was born on August 31, 1955, in Dayton, Ohio, the second of three sons to parents who were both educators. Although Moses initially played both basketball and football in high school, he soon turned to and excelled in gymnastics and track. Moses began his athletic career in age group competitions and later in high school in the 180 yard low hurdles and 440 yard dash. He was a serious student, even foregoing potential athletic scholarships to college in favor of attending Morehouse College in Atlanta, where he earned a bachelor's degree in physics in 1978, and later earned his master's degree in business administration from Pepperdine University in Malibu, California.

Because there was no track at Morehouse College, Edwin Moses trained for the 1976 Olympic trials using the public high school facilities around Atlanta. As a 20-year-old, unknown scholar-athlete from a renowned black college, he burst upon the international track and field scene. Not only did Edwin Moses winn the trials in the 400 meter hurdles, he also set an American record of 48.30 seconds. At the summer Olympic Games in Montreal, Canada, he became the Olympic Champion, bettering the Olympic and World Records with a time of 47.63 seconds. His eight-meter victory over Mike Shine was the largest winning margin in the event in the Olympics.

By 1981 Carl Lewis was ranked number one in the world in the 100 meters as well as the long jump. Two years later, he won the 100 meter, 200 meter and long jump at the U.S. national championships, the first person to achieve this triple since Malcolm Ford in 1886. The 1984 Summer Olympics was a time for Carl Lewis to shine. Meeting Jesse Owens as a child, it had always been a goal of his to equal Jesse Owens feat of four gold medals in a single Olympic, and in 1984 Carl Lewis did just that, gaining gold in the 100m, 200m, long jump and 4x100m relay. It was a remarkable achievement, though to Carl's disappointment it didn't lead to the endorsements and popularity he might have hoped for. There was some criticism for this decision to forego his last 4 long jump attempts to focus on other events. Many hoped he would break Bob Beamon's record as well as win gold.

At Morehouse, where he basically coached himself, Edwin Moses was known as "Bionic Man" due to his improbable, fierce workouts. He took a scientific approach to analyzing his performance and developing his training methods. On Aug. 26, 1977 in Berlin, Edwin Moses lost to Harald Schmid, his fourth defeat in the 400 hurdles, his last loss for almost a decade. The next week he began his amazing 107-finals winning streak (122 races overall) by beating Schmid by 15 meters in Dusseldorf."I have the killer instinct," Moses said. "It's ego. When I'm on the track, I want to beat everyone."

After graduating from Morehouse in 1978, Moses accepted an engineering position at General Dynamics, then the following year took a leave of absence to pursue his athletic career full time. The United States boycotted the 1980 Olympic Games held in Moscow, thereby denying Moses a second golden opportunity. However, he demonstrated his excellent form in Milan, Italy when he smashed his World Record of 1977 with a new record time of 47.13 seconds. Three years later he lowered the mark once again on his 29th birthday in Koblenz, West Germany, with his time of 47.02. This record remained unbroken until 1992.

During the early 1980s Edwin Moses began to speak up on controversial issues. On the heels of the passing of the U.S. Amateur Sports Act in Congress in 1978, Moses set out to improve training conditions and financial support mechanisms for American athletes. Working diligently Edwin Moses was able to persuade the Athletics Congress to advocate the liberalization of the international and Olympic eligibility rules by adopting a revolutionary concept to provide revenue through an Athletes Trust Fund program.

A less popular topic among athletes, Edwin Moses also spoke out against the use of steroids and ways to improve drug testing. He recognized the disastrous affects that rampant use of these drugs by athletes, could cast upon the sport of Track and Field, and feared that continued, unchecked steroid abuse would eventually dismantle the fabric of International sports. Meanwhile, Moses continued to perform brilliantly in track and field. In 1983, he won his first world title at the first World Championships at Helsinki, Finland. One of the most shining moments of his career came one year later at the Olympic Games in Los Angeles, when he was chosen to recite the Athletes' Oath during opening ceremonies.

A few days later, he reaffirmed his unparalleled sportsmanship by winning his second Olympic gold medal. In the 1988 Olympics in Seoul, South Korea, Moses ran his fastest Olympic final but finished third to take the bronze medal. Moses retired from track afterward but took up bobsledding and won the bronze for two-man teams in a 1990 World Cup race in Germany.

He currently serves as chairman of the U.S. Anti-Doping Agency, a job that puts him on the front lines of a fight that currently is centered on allegations that Russia’s government ran a program to help its Olympic athletes evade positive tests. Moses has been a featured speaker for years at meetings to discuss the Russia case and others.