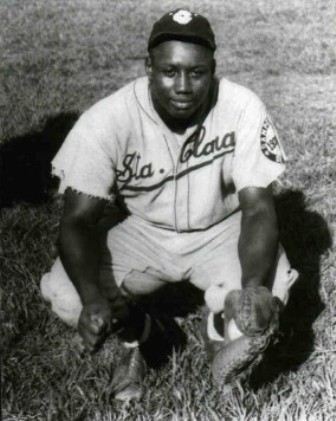 Considered one of the greatest hitters for the Negro League, Josh Gibson was a strong and agile catcher at 6' 1", 215 pounds, and baseball historians consider Gibson to be among the very best catchers and power hitters in the history of any league, including the Major Leagues. Often referred to as the black Babe Ruth, Josh Gibson was voted into the Hall of Fame in 1972. Unfortunately the right-handed powerhouse hitter never received the opportunity to show his stuff in the major leagues because he was an African-American. Satchel Paige, who was Gibson's teammate on the Pittsburgh Crawfords and later pitched for the Cleveland Indians, said, "He was the greatest hitter who ever lived." Josh Gibson has been credited with as many as 84 home runs in a single season of baseball.

Josh Gibson was born on December 21, 1911 in Buena Vista, Georgia. He moved to Pittsburgh's North Side with his family ten years later when his father found work in the steel mills. As a youngster Josh was a natural athlete. Though stocky and thick-legged, he was a fast runner and won several awards in track meets. His first love was baseball, and by age 16 Gibson had made a name for himself as a sandlot player.  Josh Gibson played for several amateur teams, including a team sponsored by Gimbels Department Store, where he worked as an elevator operator.

Quickly standing out as a talented player, Gibson was soon recruited by the Pittsburgh Crawfords, which in 1928 were the top semi-professional team in the Pittsburgh area and in 1931 would become a fully professional major Negro league team.

A premier team, the Grays were filled with talent and Gibson added his catching and power hitting to the mix. Gibson batted for a phenomenal .461 average in his rookie year and was a key factor in the Grays' win over New York's Lincoln Giants in the playoffs for the Eastern Division championship. In one of the games played in Yankee Stadium he slammed a home run into the left field bullpen that traveled more than 500 feet. Fans for years after would claim it was one of the longest drives ever hit in that ballpark.

In 1932, a fat contract and an opportunity to play for Gus Greenlee, lured Josh Gibson back to the now professional Pittsburg Crawfords. Playing with other black baseball stars like Satchel Paige and Judy Johnson, the Pittsburg Crawfords were the team to beat. Statistics for the Negro Leagues were not always formally kept and so many of Josh Gibson's records are not exact. It was reported that he won nine home-run titles and four batting championships playing for the Crawfords and the Homestead Grays. In two seasons in the late 1930s, it was written that not only did Josh Gibson hit higher than .400, but his slugging percentage was above 1.000.

Like most stars of the Negro leagues, Gibson played winter ball for lucrative contracts in Mexico, Cuba, Puerto Rico, and Central America. He was idolized by fans in Puerto Rico and considered his play there as the high point of his career. In 1937 he joined several black stars, including Satchel Paige and Cool Papa Bell, in the Dominican Republic to play for a team owned by dictator Rafael Trujillo. In a quick seven-week season Gibson hit .453 and lead Trujillo's All-Stars to the championship.

Early the next year, Gibson suffered a brain tumor that put him in a coma. When he awoke, doctors wanted to operate, but Gibson wouldn't let them, fearing that surgery would leave him a vegetable. Despite recurring headaches and a drinking problem, he continued to tear apart the Negro League, winning two more batting crowns and three more home-run titles in the next four seasons. Only 35 Josh Gibson passed away from a stroke in 1947 in Pittsburgh, Pennsylvania, just three months before Jackie Robinson became the first African American player in modern major league baseball history. Although he was no able to play in the Major Leagues because of the color barrier, Josh Gibson was inducted into the Baseball Hall of Fame in 1972.