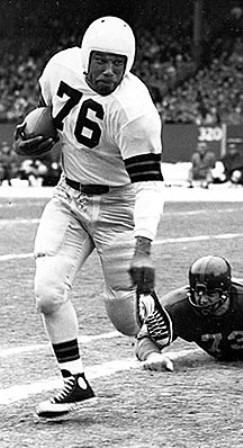 Marion Motley's bruising running style and exceptional blocking ability marked him as one of professional football's greatest players. Motley, at 6 feet 1 inch  tall and weighing 238 pounds, was the leading rusher in the four-year history of the AAFC, with 3,024 yards. The Cleveland Browns won every AAFC title and compiled a 47–4–3 regular-season record. Motley, who also contributed defensively, was an AAFC linebacker in each of his first three seasons.

Motley and Willis, however, went on to have Hall of Fame careers. Motley joined the Browns as a 26-year-old rookie. Browns’ coach Paul Brown was already familiar with Motley, having coached the big fullback at the Great Lakes Naval Training Station during World War II.

Marion Motley was born June 5, 1920, in Leesburg, Georgia. Motley played football at Canton McKinley High School in Canton, Ohio, and went on to South Carolina State University and then to the University of Nevada, where he played football while participating in other collegiate sports such as track, throwing javelin, and boxing.

Motley was a fullback and linebacker for both South Carolina State University  and the University of Nevada before playing for the Great Lakes Naval Training Station during World War II. His coach there was Paul Brown, who later was named the first coach of the Cleveland Browns in the All-America Football Conference (AAFC). Motley signed with Cleveland as a fullback in 1946, breaking professional football's 13-year color barrier along with three other players.

Marion Motley was the forerunner of the modern fullback. At a time when there were still 180-pounders running the ball, and 220-pound linemen were commonplace, Motley was a solid 240 pounds, and he had a sprinter's speed. It was with Motley at fullback that Browns' coach Paul Brown developed and popularized the "draw" play that is now a standard feature of any passing team.

When the AAFC shut down in 1950, Motley was the league's career rushing leader at 3,024 yards. In the 1950 season he led the league in rushing with 810 yards on 140 carries, averaging nine or ten carries a game, due to sharing the backfield with Hall of Fame quarterback Otto Graham. But Motley was an outstanding pass blocker and played linebacker on defense, which was uncommon at the time.

The Browns joined the NFL in 1950 and that season Motley led the league in rushing with 810 yards on 140 carries (5.8 per rush), averaging less than a dozen carries per game. That October, he set a record that lasted over 52 years when he averaged over 17 yards per rush against the rival Steelers, with 188 yards on 11 carries. To qualify for that single-game record, a player must have a minimum of 10 carries. In December 2002, quarterback Michael Vick of the Atlanta Falcons rushed for 173 yards on 10 carries against the Minnesota Vikings, eclipsing Motley's average by 0.21 yards per carry.

Coach Paul Brown was a key player in integrating the National Football League. To him he only saw talent and ability, not color. "I never considered football players black or white," Brown wrote in his autobiography, " nor did I keep or cut a player just because of his color. In our first meeting before training camp every year, I told the players that they made our teams only if they were good enough. I didn't care about a man's color or his ancestry; I just wanted to win football games with the best people possible."

Paul Brown recognized Marion Motley's talent early on and gave him the opportunity to excel in football. "Motley became our greatest fullback ever," Brown would later write in his autobiography, "because not only was he a great runner, but also no one ever blocked better - and no one ever cared more about his team and whether it won or lost, no matter how many yards he gained or where he was asked to run...Marion's tremendous running ability also was what made our trap and draw plays so effective.  When he ran off tackle, people seemed to fly off him in all directions. He possessed tremendous speed for a big man, and he could run away from linebackers and defensive backs when he got into the open - if he didn't trample them first. I've always believed that Motley could have gone into the Hall of Fame solely as a linebacker if we had used him only at that position. He was as good as our great ones."

After retiring Marion Motley scouted players for the Browns, and wanted to coach. At the time, racism frequently prevented minorities from obtaining coaching jobs and he was turned down on most offers.

In nine seasons as a professional fullback, Motley gained 4,720 yards on 828 carries for an astounding 5.7 yards per carry average. He was the first African American elected to the Pro Football Hall of Fame in 1968 and in 1994 was honored on the NFL’s 75th Anniversary All-Time Team.  Marion Motley died on June 27, 1999. He was 79 years old.