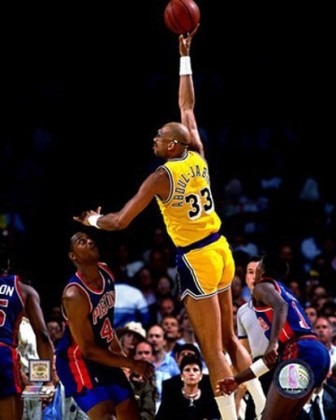 African American Kareem Abdul-Jabber was one the greatest basketball players in the history of the game. Using his signature sky hook, Kareem Abdul-Jabbar led first the Bucks, then the Lakers to a total of six champion titles, and in the process received six most valuable player awards. Kareem Abdul-Jabbar at 7-feet-2-inches tall remains one of the tallest men ever to play professional basketball.

The legendary athlete known today as Kareem Abdul-Jabbar was born Ferdinand Lewis Alcindor, Jr. April 16, 1947 in New York City, the only child of Cora and Ferdinand Alcindor. The young Lew Alcindor, as he was called, was Roman Catholic and attended the St. Jude's parish elementary school, where he excelled in baseball, swimming, and ice skating. Lew grew quickly and was already 6 feet 6 inches in the 8th grade, turning to basketball as his exclusive sport.

Lew Alcindor attended UCLA, wanting to play for Coach John Wooden. The UCLA Bruins and Coach Wooden had already won two previous championships and with Jabbar as center the team was positioned to break records. NCAA rules didn't allow freshmen to play varsity, but Alcindor's records were worth the wait. The Bruins were national champions all three years (1967-69), losing only two games out of 90. One of those losses was the "Game of the Century".

On January 20, 1968, Alcindor and the UCLA Bruins faced the Houston Cougars in the first-ever nationally televised regular season college basketball game. In front of 52,693 fans at the Houston Astrodome, Elvin Hayes scored 39 points and had 15 rebounds, while Alcindor, who suffered from a scratch on his left cornea, was held to just 15 points.  Houston managed to beat UCLA 71-69, ending the Bruins' 47-game winning streak  in what has been called the "Game of the Century". Hayes and Alcindor would have a rematch in the 1968 NCAA Men's Division I Basketball Tournament where UCLA with a healthy Alcindor, would defeat Houston in the semi-finals 101-69, and go on to win the National Championship.

To date, he is the only athlete to be named the NCAA Tournament's Most Outstanding Player three times. The sports press and wire services acclaimed him as College Player of the Year in both 1967 and 1969.

The Harlem Globetrotters offered Lew Alcindor a million dollars to play for them, but he declined, and was picked first in the 1969 NBA Draft by the  new formed Milwaukee Bucks. He was also chosen first overall in the 1969 American Basketball Association draft by the New York Nets. The Nets believed that they had the upper hand in receiving Alcindor's services because he was from New York; however, when Alcindor told both the Bucks and the Nets that he would accept one offer only from each team, the Nets bid too low, steering Alcindor to the National Basketball Association over the struggling American Basketball Association.

With the addition of Oscar Robertson, known to sports fans as "the Big 'O'," Milwaukee went on to record the second-best record with 66 victories in 1970–71, including a then-record of 20 straight wins. Alcindor was awarded his first of six NBA Most Valuable Player Awards, along with his first scoring title. In the playoffs, the Bucks went 12-2, winning the championship.

On May 1, 1971, the day after the Bucks won the NBA championship, Lew Alcindor adopted the Muslim name Kareem Abdul-Jabbar, its Arabic translation means "generous  servant of  the mighty one (of God).

While remaining relatively injury-free throughout his NBA career, Abdul-Jabbar twice broke his hand. The first time was during a pre-season game in 1974, when he was bumped hard and got his eye scratched, which angered him enough to punch the basket support stanchion. When he returned, after missing the first 16 games of the season, he started to wear his now famous protective goggles. The second time he broke his hand was in the opening game of the 1977–78 NBA season. Two minutes into the game, Abdul-Jabbar punched Milwaukee's Kent Benson in retaliation for an overly aggressive elbow. He was out for two months.

Abdul-Jabbar always spoke well of Milwaukee and its fans, but he said that being in the Midwest did not fit his cultural needs and requested a trade to either New York or Los Angeles in October 1974.

In 1975, the Lakers acquired Abdul-Jabbar. In the 1976-77 season, Abdul-Jabbar had another strong season, leading the league in field goal percentage, finishing second in rebounds and blocked shots, and third in points per game. He helped lead the Lakers to the best record in the NBA, and he won his record-tying fifth MVP award. In the playoffs, the Lakers played against the Portland Trail Blazers. The result was a memorable matchup, pitting Abdul-Jabbar against a young, injury-free Bill Walton. Although Abdul-Jabbar dominated the series statistically, Walton and the Trail Blazers  swept the Lakers.