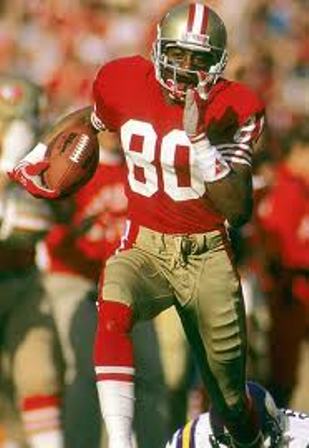 Arguably the best receiver ever, Jerry Rice owns nearly every major receiving record in the NFL, including most catches (1,549), receiving yards (22,895) and TD catches (197). Rice has at least 400 more catches than any other receiver. Jerry Rice was recently voted number one on "The Top 100: NFL's Greatest Players"  by the NFL Network. Jerry Rice was selected to the Pro Bowl 13 times and named All-Pro 11 times in his 20 NFL seasons. He won three Super Bowl rings playing for the San Francisco 49ers and an AFC Championship with the Oakland Raiders.

The son of a brick mason, Jerry Lee Rice was born October 13,1962. He developed his hands while working for his father by catching bricks that his brothers threw at him. Rice later recalled that working for his father also taught him "the meaning of hard work." Rice developed his speed as a kid growing up outside Crawford, Mississippi, near Starkville. It was there that he and some of his five brothers would go into the family's field and chase the neighbors' horses who grazed there. "They didn't just come to you," Rice says. "If you wanted to ride, you chased them down." So the Rice brothers would zig zag through the fields and then after they caught the horses, they would ride bareback..

As a high school player, Jerry Rice became an All-State end and defensive back, even played running back and quarterback at times. Despite his talent Rice didn't get a scholarship offer from the 40 or so NCAA Division I-A schools that showed interest. Even Mississippi State, just 20 miles away, didn't offer a scholarship. But Archie Cooley, coach of Division I-AA Mississippi Valley State University in Itta Bena, Mississippi, had heard about Rice. Rice says of Cooley: "no one else came to see me in person." Based on that and it being his only offer, along with the urging of his older brother Tom, Jerry accepted the scholarship from MVSU and arrived in Itta Bena in 1981.

Jerry Rice made an instant impact on the college team and quickly earned the nickname "World" because there was no ball in the world he couldn't catch. In college, he had a total of 51 touchdown catches and averaged 10 catches per game in 1984, when Mississippi Valley State averaged over 59 points per game. That season he was named an AP All-American and finished 9th in Heisman Trophy balloting. The school later named its football stadium Rice-Totten Stadium in honor of Rice and quarterback Willie Totten who threw Rice his many touchdown passes at Mississippi Valley State.

Jerry Rice's college football success caught the eye of several NFL teams, especially the San Francisco 49ers and the Dallas Cowboys. On Draft Day, April 30, 1985, the 49ers made several trades to ensure getting Jerry Rice before the Cowboys could take him. Taking Jerry Rice in the first round, the 16th pick overall, San Francisco got a wide receiver they would cherish for years to come.

Rice gave a glimpse of what was to come when he averaged 18.9 yards per catch on 49 receptions for 927 yards and 3 TDs as a rookie. He also rushed six times and scored one touchdown on the ground.

In 1986, Rice recorded a season that began perhaps the finest stretch by any receiver in NFL history. That year, he caught 86 passes for a league-leading 1,570 yards. He also led the NFL in touchdown catches with 15. It marked the first of 11 straight 1,000-yard seasons for Rice who also recorded double-digit receiving touchdown totals in nine of the next 10 seasons.

The following year, Rice set the NFL record for touchdown receptions in a season with 22. His first of four seasons with 100 catches came in 1990 when he had an even 100 receptions to lead the NFL in that category. It marked the first of two receiving titles for Rice.

No wide receiver in NFL history played more than Rice’s 20 seasons. By the time he retired after finishing his career with Oakland and Seattle, he was the most prolific wide receiver in NFL history with staggering career totals. At his retirement, the NFL Record and Fact Book listed Rice with 38 different NFL records, including career totals of 1,549 receptions, 22,895 yards and 197 touchdowns. Rice went on to become a commentator for NFL games, and he placed second on the TV show Dancing With the Stars in 2006. He was inducted into the NFL Hall of Fame in 2010.

Rice, who has been involved with the United Negro College Fund, has a foundation titled "127 Foundation" that annually donates funds to the Bay Area Omega Boys Club.