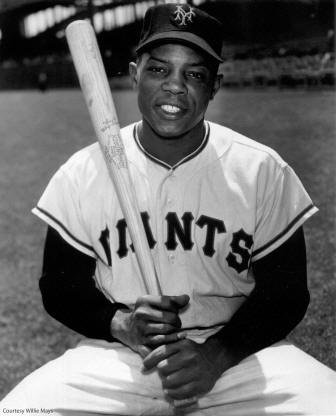 Willie Mays is considered one of the greates baseball players to ever play the game. In 1954 he rose to the top of the league, hitting for a league-leading .345 batting average and slugging 41 home runs. Mays won the National League Most Valuable Player Award and the Hickok Belt as top professional athlete of the year.

Joe DiMaggio said Mays had the greatest throwing arm in baseball. Mays's 7095 putouts are the all-time record for an outfielder, but Mays excelled as a hitter as well. His career batting average was .302. For eight years running, he drove in more than 100 runs a year, and his 660 home runs put him in third place for the all-time home run record. He won the Gold Glove Award 12 times. He was voted Most Valuable Player in the National League in both 1954 and 1965. Small wonder one sportswriter remarked that "Willie Mays should play in handcuffs to even things up."

William Howard Mays, Jr. was born in Westfield, Alabama, just outside of Birmingham. Though they never married, both of his parents contributed to Willie May's love of sports. His father was a talented baseball player with the Negro team for the local iron plant. His mother Annie Satterwhite had been a gifted basketball and track star in high school. As a baby Willie Mays was often cared for by his mother's two younger sisters Sarah and Ernestine, with Sarah became the primary female role model in Mays life. Almost from the time he could walk, Willie Mays' family encouraged his athletic abilities. He attended games with his father, sitting in the dugout and serving as batboy for the steel mill team

Attending Fairfield Industrial High School, Willie Mays played quarterback on the football team and regularly led the basketball team in scoring, but the school had no baseball team, so by 14, Willie had joined his father on the mill team. Fitting in quickly with the adults on the baseball team, Willie Mays was soon recruited to play professional ball for the Birmingham Black Barons in the Negro League. It soon became clear that baseball would be Willie Mays career. He completed high school while playing professional baseball on weekends, school holidays and the summer months.

In 1950. soon after he graduated from high school, Willie Mays was signed by the New York Giants, who sent him to  him to their minor league Class-B affiliate in Trenton, New Jersey, where he was the only black player. He was jeered by fans for his color, received death threats, and he was housed in a seedy, "colored-only" hotel across town from the rest of the players. Years later, Mays told how several of his white teammates had come to his hotel room, snuck in the window and slept on the floor, to make sure he was safe and to let him know he was one of them. The following year Mays was called up to the AAA team the Minneapolis Millers. Playing with the team for 35 games Mays had a batting average of .477 and was making a big impact in the field. On May 24, 1951 Willie Mays got called up to "the show", playing his major league game in Philadelphia.

Mays began his major league career with no hits in his first twelve at bats. On his thirteenth at bat, he hit a homer over the left field fence of the Polo Grounds off Warren Spahn. Spahn later joked, "I'll never forgive myself. We might have gotten rid of Willie forever if I'd only struck him out." Mays' average improved steadily throughout the rest of the season. Although his .274 average, 68 RBI and 20 homers in 121 games were among the lowest of his career, he still won the 1951 Rookie of the Year Award.

They following year Willie Mays was drafted into the Army, missing most of that season and all of the 1953 season, missing about 266 games in all. Not sent to the conflict in Korea, Willie Mays spent most of his time in the service playing ball in  Ft. Eustis, Virginia.

Mays returned to the Giants in 1954, hitting for a league-leading .345 batting average and slugging 41 home runs. Mays won the National League Most Valuable Player Award and the Hickok Belt as top professional athlete of the year. In addition, the Giants won the National League pennant and the 1954 World Series, sweeping the Cleveland Indians in four games. The 1954 series is perhaps best remembered for "The Catch" (shown above), an over-the-shoulder running grab by Mays in deep center field of the Polo Grounds of a long drive off the bat of Vic Wertz during the eighth inning of Game 1. Considered the iconic image of Mays' playing career and one of baseball's most memorable fielding plays, the catch prevented two Indians runners from scoring, preserving a tie game. The Giants won the game in the 10th inning, with Mays scoring the winning run.

After his playing years, Mays worked as a coach and took a part-time job with Bally's Resorts. In perhaps the most boneheaded decision of then-Commissioner Bowie Kuhn's career, he ordered Mays to quit the Bally's job in 1979, because the company owned casinos and Kuhn feared baseball might be tarnished by his association with "the gambling industry". Mays quit coaching instead, and Kuhn banished him from baseball. Kuhn's decision was reversed a few years later when Peter Ueberroth became Baseball Commissioner.