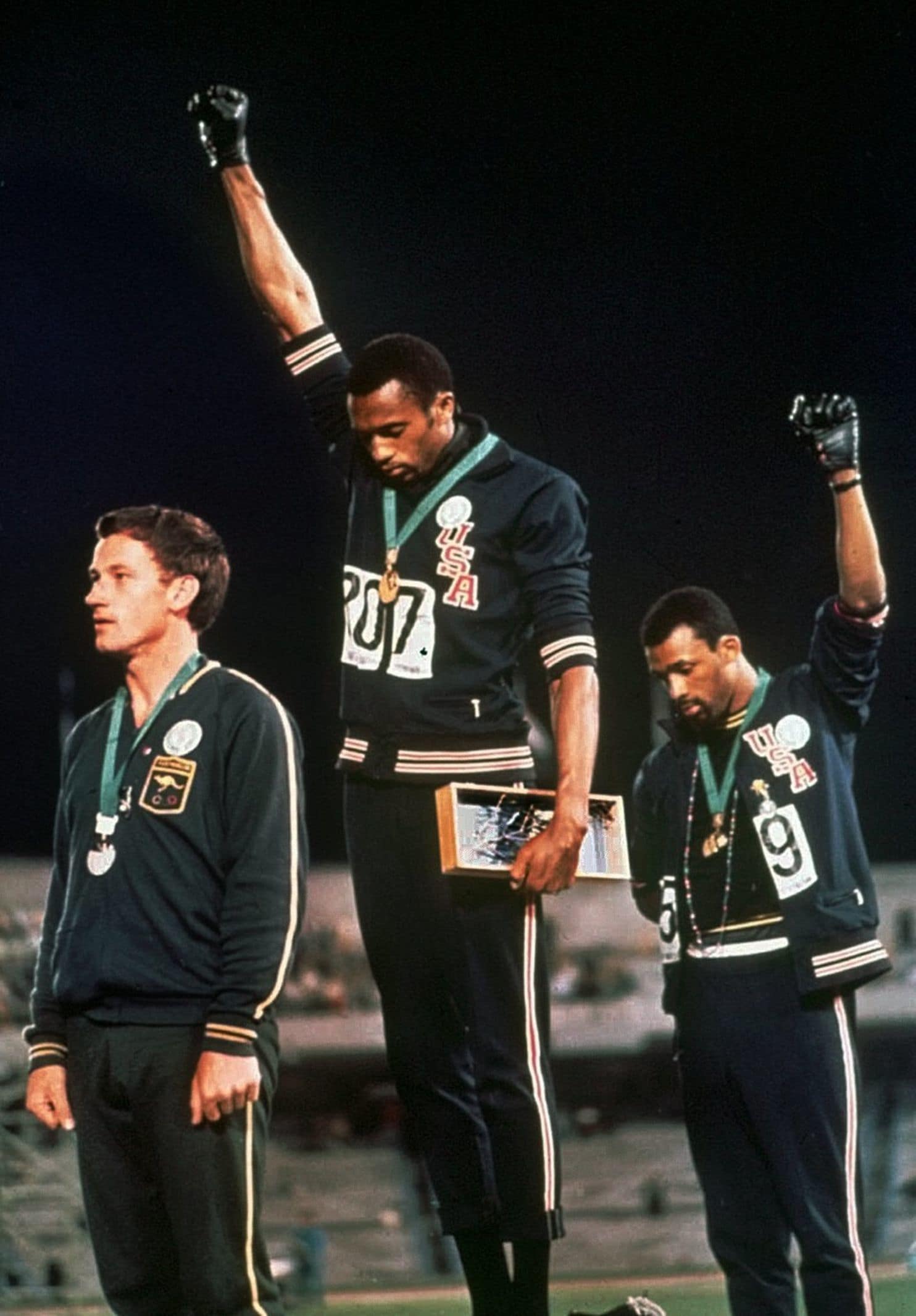 U.S. Olympic medalists John Carlos and Tommie Smith made history by raising black-gloved fists during the medal ceremony at the 1968 Olympic Games in Mexico City, becoming one of the most iconic sports moments of the 20th century. The bronze medal winner in Mexico City, John Carlos and 200 meter winner, Tommie Smith stood at attention, but raised black-gloved fists in the "Black Power" salute, hoping to call attention to the plight of the black man in America. International Olympic Committee President Avery Brundage banned the two men from the Olympic Village and forced them from the United States Olympic team. After their return to the United States, both men received death threats. However, they had become a significant symbol of the Civil Rights struggle.

John Carlos was born June 5,1945 in Harlem, New York and was a gifted high school athlete,  graduating from Machine Metals High School in 1965. By his graduation John Carlos was already noted for his exceptional running ability and his ability to articulate a forceful message.  During his senior year in high school, he became a New York City sprint champion & was invited to his first international competition in Trinidad.

John Carlos received a full scholarship to East Texas State University (ETSU), and became that school's first track and field Lone Star Conference Champion. After only one year at ETSU, Carlos was accepted at San Jose State University, where under the tutelage of Lloyd "Bud" Winter, he began to excel on the track.

John Carlos became a founding member of the Olympic Project for Human Rights (OPHR), initially created to organize a boycott of the 1968 Summer Olympics in Mexico City. At the 1968 Olympic Trials, Carlos stunned the track world when he won the 200-meter dash in 19.92 seconds, beating world-record holder Tommie Smith and surpassing his record by 0.3 seconds. Though the record was never ratified because the spike formation on Carlos' shoes  was not accepted at the time, the race reinforced his status as a world-class sprinter.

Following his third-place finish behind fellow American Smith and Australian Peter Norman in the 200 at the Mexico Olympics, Carlos and Smith made headlines around the world by raising their black-gloved fists at the medal award ceremony. In support, Peter Norman, the silver medalist who was a white athlete from Australia, participated in the protest by wearing an OPHR badge.

Smith later told the media that he raised his right, black-glove-covered fist in the air to represent black power in America while Carlos' left, black-covered fist represented unity in black America. Together they formed an arch of unity and power. The black scarf around Smith's neck stood for black pride and their black socks (and no shoes) represented black poverty in racist America.

While the protest seems relatively tame by today's standards, the actions of Smith and Carlos were met with such outrage that they were suspended from their national team and banned from the Olympic Village, the athletes' home during the games. The protest had lingering effects for both men, the most serious of which were death threats against them and their families. John Carlos continued to achieve in the field of track, and in 1969 he tied the 100-yard dash record with a time of 9.1 seconds and led San Jose State to the NCAA championship for the first time. Track and Field News recognized John Carlos as the Worlds Fastest Human in the 60 yard dash, 100 yard dash, and 220 yardd dash in both 1969 and 1970.

After his track career ended, Carlos looked to football and joined the NFL's Philadelphia Eagles, until a knee injury sidelined him after just a year. Continuing to play football, this time in Canada for the CFL, John Carlos played one season for the Montreal Alouettes and one seasonr with the Toronto Argonauts. Following his retirement from football, Carlos worked for Puma, the United States Olympic Committee, the Organizing Committee of the 1984 Summer Olympics and the City of Los Angeles. In 1985, Carlos became a counselor and in-school suspension supervisor, as well as the track and field coach, at Palm Springs High School in California. In 2003, he was elected to the National Track & Field Hall of Fame. In 1998, both Smith and Carlos were honored in a ceremony to commemorate their protest at the 1968 Olympic Games, and the two reunited again at the funeral for Australian runner Peter Norman's funeral ceremony in 2006.

In 2017 when President Trump degraded NFL players for kneeling during the anthem as a form of protest againt violence aimed at African Americans, people looked again at John Carlos' famous protest. He said in an HBO documentary that they were just trying to bring attention to injustice in the United States. “I don’t like the idea of people looking at it as negative,” Smith said. “There was nothing but a raised fist in the air and a bowed head, acknowledging the American flag — not symbolizing a hatred for it.”