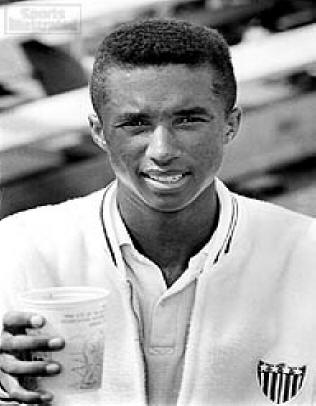 Arthur Ashe was a top ranked tennis player in the 1960s and 70s. Raised in the segregated South, he was the first African-American male tennis player to win a Grand Slam tournament. During his career, he won three Grand Slam titles, putting him among the best ever from United States. Arthur Ashe more than just an athlete, his commitment to further social causes made Arthur Ashe an important part of American growth.

Arthur Robert Ashe Jr. was born on July 10, 1943, in Richmond, Virginia. His mother,  Mattie Cordell Cunningham Ashe, died of heart disease when Arthur Ashe was only six. Ashe's father, Arthur Ashe Sr., worked as a caretaker for a park named Brook Field in suburban North Richmond.  Arthur Ashe lived on the grounds, where with four tennis courts, a pool, and three baseball diamonds, he quickly picked up a talent for sports.

Ashe began playing tennis at age six. He received instruction from R. Walter "Whirlwind" Johnson, an African American doctor from Lynchburg, Virginia, who opened his home in the summers to tennis prospects, including the great Althea Gibson. Johnson used military-style methods to teach tennis skills and to stress his honor code of sportsmanship, which included respect, sharp appearance, and fair play at all times.

After high school, Arthur Ashe received a tennis scholarship to the University of California at Los Angeles. In 1966 Arthur graduated with a degree in business administration. In addition to finishing his studies, in 1965 he won the individual NCAA championship and had significantly contributed to UCLA's winning the team NCAA tennis championship. Arthur Ashe Arthur had also been featured  in Sports Illustrated's Faces in the Crowd as an up and coming star athlete.

Following college Arthur Ashe served in the army for two years, during which he was assigned time for tennis competitions. In 1968 Ashe created a tennis program for U.S. inner cities. The program was designed to expose children to tennis who might not otherwise have opportunities to play while fostering a sense of discipline and attention to academics.

In 1968, Arthur Ashe won the United States Amateur Championships and the inaugural US Open and aided the U.S Davis Cup team to victory. He is the only player to have won both of these amateur and open national championships in the same year. Concerned that tennis professionals were not receiving winnings commensurate with the sport's growing popularity, Ashe supported formation of the Association of Tennis Professionals. That year would prove even more momentous for Ashe when he was denied a visa by the South African government, thereby keeping him out of the South African Open. Ashe used this denial to publicize South Africa's apartheid policies. In the media, Ashe called for South Africa to be expelled from the professional tennis circuit.

Turning professional in 1969, Arthur Ashe won the Australian open, the second of his three career grand Slam singles titles in 1970. By the early 70s he had become one of the most famous tennis players. Along with Arthur's growing celebrity status, the sport of tennis was becoming more and more popular. South Africa eventually granted Arthur a visa in 1973. He was the first black pro to play in the national championships there where he reached the singles finals and won the doubles title with Tom Okker.

In 1975, at age 31, Arthur Ashe won Wimbledon and was ranked #1 in the world. On July 5, 1975 he defeated the heavily favored Jimmy Connors in four sets to win the Wimbledon singles title. He was the first and only black man to win the most prestigious grass-court tournament.

In 1979 Arthur Ashe suffered a heart attack while holding a tennis clinic in New York. He was hospitalized for ten days afterwards and later that year underwent quadruple-bypass surgery. He continued to suffer chest pains though and in 1980 decided to retire from tennis with a career record of 818 wins, 260 losses and 51 titles. Arthur Ashe was inducted into the Hall of Fame in 1985.

In 1983 Arthur went through a second bypass surgery. After the operation, in order to accelerate his recovery, he received a blood transfusion which resulted in him contracting human immunodeficiency virus or HIV.

A civil rights advocate, Arthur Ashe dedicated his retirement years in humanitarian efforts.  In 1983, along with Harry Belafonte, he founded Artists and Athletes Against Apartheid, which worked toward raising awareness of Apartheid policies and lobbying for sanctions and embargoes against the South African government. He was arrested on January 11, 1985, for protesting outside the South African embassy in Washington, D.C. during an anti-apartheid rally. He was also arrested again on September 9, 1992, outside the White House for protesting on the recent crackdown on Haitian refugees.