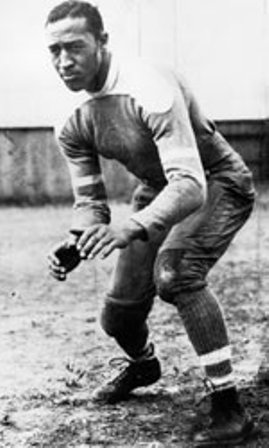 Ray Kemp was a fledgling player on the Pittsburgh Pirates NFL team in 1933. The only African American player on his team, he was one of only two black players in the NFL at that time. Before playing for Pittsburg, Ray Kemp was an Honorable Mention All American in 1931.

Ray Kemp was born on Sunday, April 07, 1907 in Cecil , Pennsylvania. Although not as bad as the Jim Crow South, racism was still an everyday occurrence for African Americans in the North. Ray Kemp would be a pioneer in the NFL and faced racism throughout his life, never responding with violence, but instead holding his head high.

Kemp graduated from Cecil High School in 1926. After graduation, he worked in the coal mines around Cecil, Pennsylvania for one year before enrolling at Duquesne University. Ray Kemp started his sophomore year. The 1928 team won eight of nine games and Duquesne's 1929 team finished the season undefeated. By 1931, Kemp’s senior season, the Dukes had progressed to the point that they played national power Carnegie Tech in a post-season charity game. Playing tackle, Ray Kemp was an Honorable Mention All American his senior year in 1931. When Kemp began his college football career, he remembered seeing one or two other African Americans on the team, but by his senior year Ray Kemp was the lone black player on Elmer Layden's squad.

Because of Ray Kemp's success playing for Elmer Layden's Duquesne squad, he attracted the attention of Art Rooney. Rooney wanted Ray to play for his J.P. Rooney semi-pro team. The following year Kemp enrolled in graduate school at Duquesne and served as the line coach for Layden. In his spare time he did play for both the J.P. Rooneys and the semi-pro Erie Pros, again as the only black player.

In 1933, the Rooney's started a new NFL team, the Pittsburgh Pirates. Kemp and some of his Rooney teammates were joined by a collection of NFL cast-offs to form the team. In 1933, the last year of integration, the NFL had two black players, Joe Lillard and Ray Kemp. Both were gone by the end of the season While most NFL players were paid $100 a game, Ray Kemp got $40.

Kemp, a 6 foot one inch, 215 pound tackle, played in the Pirates' first three games against, the New York Giants, Chicago Cardinals and Boston Redskins. The opening against against the New York Giants saw the Rookie team as a big underdog. In front of a crowd of 25,000 fans in Forbes Field, the Giants rolled over the expansion team 23-2. This was Ray Kemp's first experience of playing in front of a big crowd, and he came close to getting an interception during the game.

The teams second game was against the Chicago Cardinals, where the only other African American Joe Lillard played. Lillard, a triple-threat back, completed a touchdown pass and kicked an extra point. Kemp recalled the halftime talk by Pirate coach Jap Douds. “We were in the locker room and Jap said, ‘We have to stop that nigger.’ However, he apologized to me for that remark on the way back out to the field.” In the second half Lillard was ejected from the game for fighting and the Pirates came back to win 14-3. It was the team's first NFL victory.

The Pittsburg Pirates struggled again the following week, losing to the Boston Redskins 31-6. After the Redskins game, Kemp was cut by the team. He appealed the cut to Art Rooney, but Rooney refused to go over the head of the coach, Jap Douds, who as a player-coach, also played Kemp's position. Art Rooney stated that he was limited to having only 22 players on the roster and preferred to keep the more experienced players.

Even though Kemp had done everything he could to stay on the team, a Pittsburgh Courier story on November 14, 1933 claimed that Kemp was placed on the reserve list and quit.

With Kemp no longer on the team, the Pirates went 2-5 over the next seven games. Then on December 1st Ray Kemp received a phone call from the Pirates asking him to return to the team. Kemp had been humiliated by being cut from the team earlier, but knowing that the NFL was down to one African American player without him, decided to play. With only two days of practice, Ray Kemp was named to the starting line up, and played tackle for the entire game against the Giants. The Giants crushed the Pirates 27-3, but it wasn't the only crushing blow for Ray Kemp. While  his white teammates stayed at a Manhattan hotel, Ray Kemp was relegated to the Harlem branch of the YMCA.

The next football season Ray Kemp returned to the grid iron, but in a different capacity. He was hired as the head football coach at Bluefield State College. In Kemp’s first season at Bluefield State he led the Blues to an 8-0-1 record. That year was the first of a thirty-nine-year career as a successful coach and athletic director at Bluefield, Lincoln  University and Tennessee A&I College.

Joe Lillard also lost his position in the NFL, with his coach complaining of the constant fighting and game ejections as the cause. With the exits of Kemp and Lillard, the NFL would play without any black players until 1946.