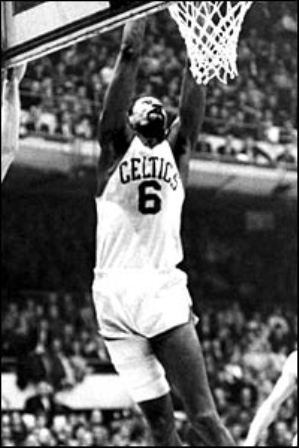 William Felton Russell was born to Charles and Katie Russell on February 12, 1934, in Monroe, Louisiana. West Monroe was strictly segregated, and the Russells often struggled with racism, which was rampant in the South. Bill Russell witnessed both his mother and father treated with disrespect for no other reason than the color of their skin. With large numbers of blacks moving to Oakland, California during WWII to look for work there, Russell's father moved the family out of Louisiana when Russell was eight years old and settled them in the Oakland projects, where Bill attended McClymonds High School in Oakland. Russell received a major emotional blow when his mother suddenly died when he was only twelve. His father, who had been a trucker since World War II, changed to a career as a steel worker to be home for his children.

In his early years, Russell struggled to develop his skills as a basketball player. Although Russell was a good runner and jumper and had extremely large hands, he simply did not understand the game and was cut from the team in junior high school. As a sophomore, Russell was almost cut again, however, coach George Powles saw Russell's raw athletic potential and encouraged him to work on his fundamentals. Russell took the warm words encouragement to heart, working hard to improve his skills. During his junior and senior years, while playing with future Hall of Famer Frank Robinson, Bill Russell began to excel, especially on defense. He later recalled, "To play good defense... it was told back then that you had to stay flatfooted at all times to react quickly. When I started to jump to make defensive plays and to block shots, I was initially corrected, but I stuck with it, and it paid off."

Bill Russell was ignored by college recruiters and did not receive a single letter of interest until Hal DeJulio from the University of San Francisco  watched him in a high school game. DeJulio sensed that the young center had an extraordinary instinct for the game, especially in clutch situations. When DeJulio offered Russell a scholarship, he accepted gratefully. Sports journalist John Taylor described it as a watershed in Russell's life, because Russell realized that basketball was his one chance to escape poverty and racism; as a consequence, Russell swore to make the best of it.

By college Bill Russell had grown to be a shade over 6-9, and now teamed with guard K. C. Jones the pair quickly lead the Dons to 56 consecutive victories and NCAA Championships in 1955 and 1956, with Russell being named the NCAA Tournament Most Outstanding Player in 1955. Despite their success on the court, Bill Russell and his black teammates were often treated as second class citizens, particularly when traveling to other cities. Several hotels in Oklahoma City refused to admit Russell and his black teammates while they were in town for the 1954 All-College Tournament. In protest, the whole team decided to camp out in a closed college dorm, which was later called an important bonding experience for the group. Decades later, Russell explained that his experiences hardened him against abuse of all kinds. "I never permitted myself to be a victim," he said.

Russell averaged 20.7 points and 20.3 rebounds in his three-year varsity career. By his senior season he had matured into a dominant force who could control a game at the defensive end. With the 1956 NBA Draft approaching, Boston Celtics Coach and General Manager Red Auerbach was eager to add Russell to his lineup. Auerbach had built a high-scoring offensive machine around guards Bob Cousy and Bill Sharman and undersized center Ed Macauley, but he hadn't been able to muster the defense and rebounding needed to transform the Celtics into a championship-caliber club. Bill Russell was the missing piece of the puzzle.

on December 22, 1956 against the St. Louis Hawks, led by star forward Bob Pettit, who held several all-time scoring records. Auerbach assigned Russell to shut down St. Louis's main scorer, and the rookie impressed the Boston crowd with his man-to-man defense and shot-blocking. Bill Russell played from the 1956-57 season until 1968-69. During that time, the Celtics won 11 championships and lost once in the Finals. There was one roster constant – Bill Russell. In previous years, the Celtics had been a high-scoring team, but lacked the defensive presence needed to close out tight games. However, with the added defensive presence of Russell, the Celtics had laid the foundation for a dynasty.

The Celtics utilized a strong defensive approach to the game, forcing opposing teams to commit multiple turnovers, which led to many easy fast break points. Russell was an elite help defender who allowed the Celtics to play the so-called "Hey, Bill" defense: whenever a Celtic requested additional defensive help, he would shout "Hey, Bill!" Russell was so quick that he could run over for a quick double team and make it back in time if the opponents tried to find the open man.

Bill Russell also became famous for his shot-blocking skills: pundits called his blocks "Wilsonburgers", referring to the Wilson NBA basketballs he "shoved back into the faces of opposing shooters". Relying on Bill Russell's defense to protect them, the other Celtics were allowed to play their men aggressively, after all if they were beaten, they knew that Russell was guarding the basket.

Bill Russell’s winning is stunning in its own right, but that’s only part of his story. Throughout his life, Russell has spoken out about injustice and has stood firm in the face of withering racism. A man of both action and intellect, he is an author and an art collector whose favorite childhood refuge was not the gym but the public library. Russell was, and is, a Renaissance man in full. As the author and social activist Dave Zirin puts it: “Bill Russell is on the Mount Rushmore of great athletes who made a difference. He’s there with Muhammad Ali, Billie Jean King, and Arthur Ashe. That’s Bill Russell’s legacy.”

Bill Russell is a member of the Naismith Memorial Basketball Hall of Fame and the National Collegiate Basketball Hall of Fame. He was selected into NBA 25th Anniversary Team in 1971, into NBA 35th Anniversary Team in 1980 and named as one of the 50 Greatest Players in NBA History in 1996, one of only four players that selected into all three teams. In 2007, he was enshrined in the FIBA Hall of Fame. In 2009, the NBA announced that the NBA Finals MVP trophy would be named the Bill Russell NBA Finals Most Valuable Player Award in honor of Russell.