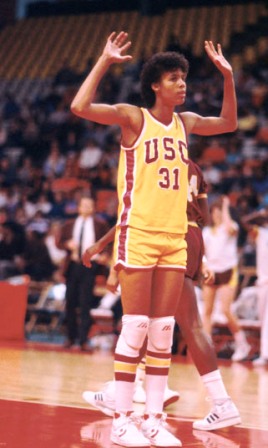 A 6'3", 150-pound guard and forward, Cheryl Miller excelled in nearly every facet of basketball. Cheryl Miller was the first woman to dunk in organized play. She was a four-time college All-American and three-time national Player of the Year, along with being a member of the 1984 gold medal-winning Olympic team.

Cheryl D. Miller was born on January 3, 1962 in Riverside, California. Cheryl grew up in an athletic family, the middle child of five. Her father, Saul Mille instilled a competitive spirit in all of his children. A jazz saxophonist turned military man the senior Miller demanded top performances from his kids in sports and in the classroom. Saul, Jr., the eldest son of Saul and his wife, Carrie, followed in his father's footsteps and became a sax player in the Air Force jazz band. Second son Darrell was a major league catcher, and her younger brother Reggie was also a basketball player, starting in the NBA. Cheryl's youngest sister was an avid volleyball player.

In 1978, six feet two inch Cheryl Miller started high school in her California neighborhood, making an instant impact on the girls Basketball team. Cheryl dominated high school competition, shattering virtually every state scoring record, including highest average in a season (37.5 points a game). In her 90 games at Riverside Polytechnic High School, Cheryl Miller scored 3,026 points, an average of 32.8 per game, grabbed 1,353 rebounds, and had 368 assists. She once scored 105 points in a game and was the first female player to dunk a basketball in competition.

The most recruited female athlete of the time, Cheryl Miller received over 250 scholarship offers. Choosing  the already strong University of Southern California, Miller went on to lead the Women of Troy to national championships her freshman and sophomore seasons, and she played in the championship game her senior season. Cheryl Miller was a four-time All-American and three times college player of the year, in 1984, 1985, and 1986. Miller won the Naismith Trophy and the Broderick Award as the nation's outstanding woman basketball player all three years, was the Wade Trophy winner in 1985, and shared the 1984 Honda Broderick Cup as the outstanding college athlete in any sport with swimmer Tracy Caulkins. During her four years and 128 games at Southern Cal, she scored 3,018 points, grabbed 1,534 rebounds, and had 462 steals in 128 games.

In 1984 Cheryl Miller played for the United States Girls Basketball Olympic team, considered by many to be the finest collection of women basketball players ever assembled. Her gold medal performance at the Summer Olympics in Los Angeles was so compelling that for a short time afterward, Miller may have been the most famous basketball player in the world, male or female. In 1985 Sports Illustrated named her National Player of the Year. Miller became an international celebrity, gracing magazine covers in Asia, meeting heads of state, and making television appearances varying from interviews with newswoman Barbara Walters to guest spots on the television drama Cagney and Lacey.

After graduating from USC in 1986, Cheryl Miller was drafted by several professional basketball leagues, including the United States Basketball League, a men's league. However, in the late 1980s, Miller suffered knee injuries that prevented her from continuing her playing career. From 1986 to 1991, she worked as an assistant coach at USC and as a television sports commentator.

In 1993 Miller was hired by USC as head coach of women's basketball. Miller's first year in the head coaching ranks was fairly successful. She led the Women of Troy to the Mideast regional finals in the NCAA tournament in the spring of 1994.

In February of 1995 Miller was one of seven individuals voted into the Basketball Hall of Fame. On hearing of her election, Miller was uncharacteristically modest. "I wasn't the greatest athlete and I couldn't jump out of the gym and I wasn't an extraordinary ball handler," Miller was quoted as saying in the Los Angeles Times. "I was just someone who loved the game so very much and had a passion for sport and life."

Cheryl Miller serves as a sideline reporter for the NBA on TNT’s Thursday night doubleheader coverage for TNT Sports. She is also making appearances on NBA TV during the 2008-09 NBA season as a reporter and analyst. Miller joined Turner Sports in September 1995 as an analyst and reporter for coverage of the NBA on TBS and TNT as Analyst and Reporter. She did make occasional appearances as Studio Analyst for the NBA games. In November 1996, she became the first female analyst to call a nationally televised NBA game (TBS). She also serves as the sidelines reporter in 2K Sports NBA 2K Series.

Miller was commissioner for the 1985 Los Angeles Olympic Committee Summer Youth Games and has been a spokesperson for the  Los Angeles Literacy Campaign, as well as the American Lung, Diabetes and Cancer Associations and Muscular Dystrophy Association.