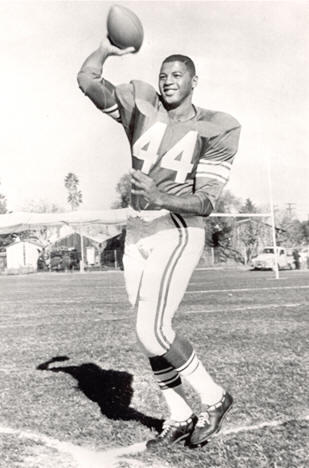 Ernie Davis was the first African American to win the coveted Heisman trophy. Playing at Syracuse, he broke Jim Brown's rushing, scoring and touchdown records and helped lead the team to a national championship.

Davis seemed destined for an extraordinary professional career in the NFL but sadly he passed away from Luekemia at the young age of 23, never getting the opportunity to play a single down in proffessional football.

Ernest R. Davis was born on December 14, 1939 in New Salem, Pennsylvania. His parents split up when he was an infant, and his father was killed in an accident before his second birthday. Ernie’s mother, Marie Davis, sent him to live with her parents, Elizabeth and Willie, in Uniontown, Pennsylvania. The family was poor, and the town, located an hour south of Pittsburgh, wasn't any better off. Ernie stuttered as a child. Over the years, as he was forced to speak more and more in public, he managed to overcome this problem.

By age 12, Davis moved with his mother and stepfather to Elmira, New York, where at Elmira Free Academy, he became a high school All-American in both his junior and senior years. At 6’2” and 215 pounds, Ernie’s size gave him a distinct advantage over his peers. Davis was also a standout in basketball and baseball, leading Elmira Free Academy to a 52-game winning streak in basketball. In all Ernie Davis won 11 letters at Elmira Free Academy. Of the three sports he played, he thought he was weakest in baseball.

At a time when many universities were not offering scholarships to black athletes, colleges from around the country watched Davis' high school career closely, and more than 50 offered him scholarships, including UCLA and Notre Dame. But Syracuse, just 90 miles away, had a famous player in its corner, Jim Brown, the star running back with the Orangemen. What also appealed to Ernie and others was the warm welcome coach Ben Schwartzwalder extended to African-American players. While many schools resisted full-bore integration of their sports teams, Syracuse was one of the most progressive in this respect. "I wanted to play in the big time," Davis said after leaving Syracuse, "and a lot of people, including Jim Brown, persuaded me that I'd have better opportunities there."

Dubbed the "next Jim Brown," the 6-foot-1, 205-pound Davis wore Brown's No. 44. He ran for 686 yards in the regular season, averaging seven yards a carry, and scored 10 touchdowns (eight rushing). Against West Virginia, he ran for 141 yards on nine carries, setting a school record for per-carry average, 15.7, and scoring twice.

While attending Syracuse, Davis was a member of the Sigma Alpha Mu Fraternity, a nationally recognized Jewish fraternity. Davis was the first African-American to become part of the organization not only at the Syracuse chapter, but for the national fraternity as a whole.

In 1959 Davis, now a sophomore, rushed for 686 yards and led the Syracuse Orangemen to an 11-0 record. Davis individually outscored Syracuse's opponents 80-73. On January 1, 1960, the Orangemen faced second-ranked University of Texas in the Cotton Bowl for the national title. While practicing place kicks prior to the game, Davis strained his hamstring and played the game hurt, but it did little to slow him down. On the third play from scrimmage, the Orangemen ran a halfback pitch in which Gerhard Schwedes took the handoff and then flung the ball down the field to Davis who caught the pass and ran for an 87-yard touch-down, setting a Cotton Bowl record. Davis later caught a 4-yard touchdown pass, scored a 2-point conversion, and intercepted a pass while playing defensive back. Syracuse went on to win the game and the national title 23-14.

As a black athlete playing many games in the south, Ernie Davis was the victim of racism on several occasions. The most publicized incident occurred when he was selected as the Cotton Bowl MVP in 1960. Davis was told by organizers that he would be allowed to accept his award at the post game banquet, and would immediately have to leave the segregated facility. Ernie refused to receive the award, and his entire team agreed to boycott the banquet.

As a senior at Syracuse, Ernie Davis was the first African American to win the Heisman trophy. In the second-closest Heisman Trophy voting ever, Ernie edged Bob Ferguson of Ohio State 824 votes to 771. Jimmy Saxton of Texas was s close third. Prior to Ernie’s win, only four African-American players, including Buddy Young and Jim Brown, had ever made the Top 5 in the Heisman voting.

Ernie Davis was the number-one pick in the 1962 NFL Draft, becoming the first African American football player to be taken first overall. Selected by the Washington Redskins, his rights were then traded to the Cleveland Browns for Bobby Mitchell and a first-round draft choice. Davis was also drafted by the Buffalo Bills of the American Football League.

Davis signed a three-year, $200,000 contract with the Browns in late December 1961 while he was in San Francisco, California practicing for the East-West Shrine Game. Originally reported at $80,000, the contract, according to Davis' attorney, consisted of $80,000 for playing football, including a $15,000 signing bonus; $60,000 for ancillary rights, such as image marketing; and $60,000 for off-season employment. It was the most lucrative contract for an NFL rookie up to that time. However, the Browns' dream of pairing Davis with Jim Brown in the backfield took a tragic turn when Davis was diagnosed with leukemia during preparations for the 1962 College All-Star Game.

In March 1963, while in remission, Davis wrote an article for The Saturday Evening Post in which he said, "Some people say I am unlucky. I don't believe it. And I don't want to sound as if I am particularly brave or unusual. Sometimes I still get down, and sometimes I feel sorry for myself. Nobody is just one thing all the time. "But when I look back I can't call myself unlucky. My 23rd birthday was December 14. In these years I have had more than most people get in a lifetime." Two months later, Davis died.

Davis never played a game as a professional, with his only appearance at Cleveland Stadium coming during a 1962 pre-season game, in which he ran onto the field as a spotlight followed him. Following his death, the Browns retired his number 45 jersey.