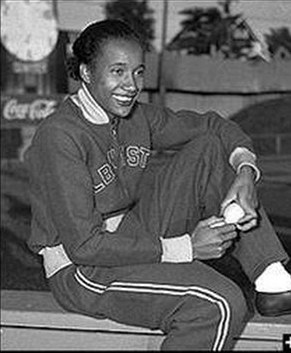 Alice Coachman was the first female African American selected for the U.S. Olympic team., She went on to become the first black woman of any nationality to win a gold medal at the Olympics with her victory in the high jump at the 1948 Summer Games in London. Alice Coachman paved the way for hundreds of black female Olympic champions.

Alice Coachman was born  in rural Georgia on  November 9,1923, near the town of Albany. Born  in the fifth of ten children, Alice's family was poor, and even as a youngster, Coachman had to work at picking cotton and other crops to help her family meet financially. Running and jumping was deemed unladylike and to avoid a whipping, Alice tried to make sure her father didn't see her doing either. Not having shoes, Alice Coachman ran barefoot on the dirt roads near her house, practicing jumps over a crossbar made of rags tied together. Coachman received encouragement from her fifth-grade teacher, Cora Bailey, at Monroe Street Elementary School and from her aunt, Carrie Spry, who defended her niece's interest in sports in the face of parental reservations. In 1938, when Coachman enrolled in Madison High School, she immediately joined the track team. The Madison boys' track coach, Harry E. Lash, recognized and nurtured her talent.

Reluctantly at first, her parents  relented and allowed her to compete in the Tuskegee Institute relay in the 1930s, where she broke first high school, and then collegiate records by the time she was 16 years old. In the rural south during the time when Jim Crow laws still reigned, Alice Coachman was not guaranteed an opportunity for an education, but fortunately she received a scholarship to the prestigious Tuskegee Preparatory School. During her college career at Tuskegee, she won national championships in the 50-meter dash, the 100-meter dash, the 400-meter relay, and the high jump. She also played on the Tuskegee women's basketball team, which won three championships. She was the only African American on each of the five All-American teams to which she was named.

In 1943, Coachman won the AAU nationals in the running high jump and the 50-yard dash. Sadly both the 1940 and 1944 Olympic Games were cancelled due to World War II, denying Alice Coachman a chance to attain her biggest dream.

Alice Coachman received a trade degree in  dressmaking in 1946 from the Tuskegee Preparatory School and went on to enroll at Albany State University. Still wanting to go to the Olympics, Alice worked tirelessly and finally qualified for the 1948 Olympics at the age of twenty-four, with a 5 feet 4 inch jump, breaking the previous record of 5 feet 3-1/4 inches set in 1932.

During the 1948 Olympics in London Alice Coachman broke the record and jumped 5 feet, 6-1/4 inches on her first try, earning the gold medal for the United States. Alice Coachman became the first woman of color in the world, and the first African-American woman to win a gold medal in track and field in the history of the modern Olympics. In addition, she was the only American woman to win a gold medal at the 1948 games. Her combination Olympic gold medal and 10 consecutive US championships have never been duplicated.

After her historic win, Alice Coachman retired from competition. She became the first African American woman to benefit from endorsements. When Coachman returned to the U.S., she was treated like royalty. In addition to meeting many famous people who also gave parties for her, she was given a parade in her honor, given a victory ride from Atlanta to Macon, and given a banquet by her sorority, Delta Sigma Theta.  After her retirement, Alice Coachman taught physical education, coached, and became involved in the Job Corps in Albany Georgia. She also taught at South Carolina State College, Albany State College, and Tuskegee High School.

Alice Coachman married N. F. Davis, whom she later divorced. Later Coachman married Frank Davis. They had two children, Richmond and Evelyn, who both followed their mother's footsteps into athletics.

In 1994, she founded the Alice Coachman Track and Field Foundation, and organization supported by Olympic athletes, both aspiring and retired. The Alice Coachman Track & Field Foundation ( ACTFF ), a tax deductible, non-profit organization, was established in honor of America’s  history-making world class athlete, Alice Coachman , who rose from obscurity to become an Olympic champion. The ACTFF wants to continue to help athletes become winners. In light of recent reductions in government resources, educational cutbacks and limited sports scholarship opportunities, this assistance may be crucial to aspiring amateur athletes. She passed away July 14, 2014 in Albany Georgia.