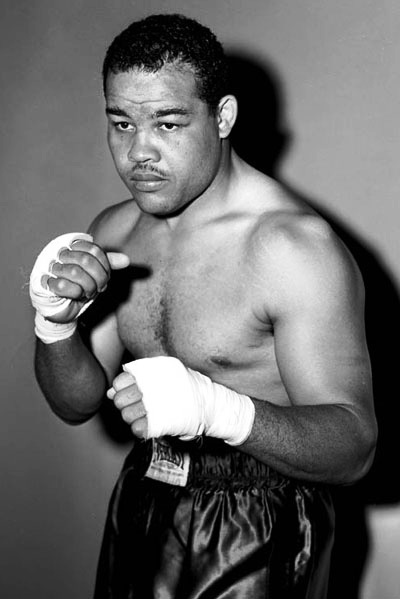 Joe Louis, the Brown Bomber, was one of America's greatest heavyweight boxers. He held the Heavyweight Championship longer than any other Champion, scoring 43 knockdowns in his first 22 Professional bouts. His professional record was 65-3-0, with 51 knockouts. Joe Louis was inducted into the Ring Boxing Hall of Fame in 1954 and the International Boxing Hall of Fame in 1990.

Joe Louis Barrow was born on May 13, 1914, in Alabama, the seventh of eight children, a grandson of slaves and one quarter Cherokee. Still a toddler, Joe Louis saw his father, Munroe Barrow, committed to a state hospital for the mentally il . His mother Lily was a hard working  religious woman, wand she later married again, to a widower named Pat Brooks with eight children of his own. At the time of the Great Migration, Pat and Lily moved their new family up to Detroit, where factory work was plentiful.

Born into a poor family, Joe Louis's mother felt the only way her son could escape poverty was through music. She bought him a violin and sent him off daily to lessons. On his way there, young Joe would pass by a boxing gym. In no time, he was working out at the gym, training for a boxing career. Shortening his name to Joe Louis so that his mother wouldn't find out he was boxing, he won 50 of 54 amateur bouts and gained the attention of John Roxborough, king of the numbers rackets in Detroit's African-American neighborhoods. Roxborough and Julian Black, a Chicago boxing promoter, convinced Louis to turn pro in 1934, and they became his managers.

Since Julian Black was from Chicago, Louis' initial professional fights were all located in the Chicago area. His professional debut came on July 4, 1934 against Jack Kracken in the Bacon Casino on Chicago's south side. Louis earned $59 for knocking out Kracken in the first round. Joe Louis won all 12 professional fights that year, 10 by way of knockout. Through the end of 1935, Joe Louis had earned a whopping $371,645 in professional purses, about 300 times the average annual salary during the depression. Joe Louis wanted a shot at the title against Heavyweight Champion James J. Braddock. With his record and especially his knock outs, Louis had proved he was worthy, but many white promoters were wary of giving a chance for the heavyweight title to an African American. Bad feelings remained from the memories of how Jack Johnson had crushed the Great White Hope just a few decades earlier.

Former heavyweight champion Max Schmeling was on the same chase for the title. The Schmeling and Louis camps agreed to a bout in 1936, with a contract providing that they would not schedule any other fights for six months beforehand. Joe Louis was favored 10-1 to win the bout, after all he had won his first 27 professional fights, scoring 23 knockouts. Yet Schmeling stunned Louis and American fight fans with a knockout in the 12th round. "An idol fell," wrote the New York Post, "and the crashing was so complete, so dreadful and so totally unexpected that it broke the hearts of the Negroes of the world."

Joe Louis' loss to max Schmelling turned out to be only a small detour on his path to becoming the Heavyweight Champion of the World. As World War II raged in Europe, German Max Schmelling became an unpopular choice for a title fight. Doing whatever it took to get Joe Louis into the ring with James Braddock, the "Cinderella Man", his handlers agreed to give Braddock and his manager Joe Gould, 10% of all future boxing promotion profits Joe Louis made for the next ten years. Braddock and Gould would eventually receive more than $150,000 from this arrangement.

On June 22, 1937 in Chicago, the Brown Bomber got his shot at the title. Louis, a 6 foot 1 1/2 inch, 197 pounder, knocked out James Braddock in the eight round, becoming the heavyweight champion. Thousands of African Americans stayed up all night across the country in celebration.

Joe Louis quickly looked ahead seizing the opportunity to redeem his loss against Max Schmelling. Personally hailed by Adolf Hitler as a paragon of Teutonic manhood, Schmeling, who had knocked out Louis in 12 rounds in 1936, was given a return bout on June 22, 1938, in Yankee Stadium. He was knocked out in 2 minutes 4 seconds of the first round.

Fighting anyone and everyone, Joe Louis went through what many called a "Bum of the Month" club. That changed when he met former light-heavyweight champ Billy Conn on June 18, 1941. Conn would not gain weight for the challenge against Louis, saying instead that he would rely on a "hit and run" strategy. Louis's famous response: "He can run, but he can't hide. Louis struggled through the fight, becoming dehydrated. It appeared as if Louis was about to lose his title after 12 rounds, as he trailed  on two officials' scorecards. But Conn ignored his corner's instruction and threw caution to the wind, leaving his defenses down Louis was able to knock out Conn out with just two seconds left in the 13th round. The fight went down as being one of the greatest heavyweight bouts of all time.

While still champion, Joe Louis volunteered to join the U.S. Army in 1942, at the height of his career. He made two title defenses in which he donated his entire purses to relief funds to help both the Army and the Navy. He spent almost five years in the service and boxed hundreds of exhibitions. Louis was eventually promoted to the rank of sergeant, and was awarded the Legion of Merit medal for "incalculable contribution to the general morale." Receipt of the honor qualified Louis for immediate release from military service on October 1, 1945. However, after the war, he was hounded by the Internal Revenue Service to pay back taxes on the purses he had donated. He suffered terribly through this ordeal, and soon found himself broke.

It was on December 5, 1947, where Louis met Jersey Joe Walcott, a 33-year-old veteran with a 44-11-2 record. Walcott entered the fight as a 10-to-1 underdog. Nevertheless, Walcott knocked down Louis twice in the first four rounds. Most observers in Madison Square Garden felt Walcott dominated the 15-round fight; when Louis was declared the winner in a split decision, the crowd booed. Louis was under no delusion about the state of his boxing skills, yet he was too embarrassed to quit after the Walcott fight.

Determined to win and retire with his title intact, Louis signed on for a rematch. On June 25, 1948, about 42,000 people came to Yankee Stadium to see the aging champion, who weighed 213½, the heaviest of his career to date. Walcott knocked down Louis in the third round, but Louis survived to knock out Walcott in the eleventh. Louis would not defend his title again and announced his retirement from boxing on March 1, 1949.

Owing more than $500,000 in taxes and debts to his ex wives, Joe Louis had no choice but to go back in the ring. Fighting Ezzard Charles, a deal was struck with the IRS to take all the proceeds from Louis' purse.  The match was set for September 27, 1950. Charles repeatedly beat Louis to the punch, and by the end of the fight, Louis was cut above both eyes, one of which was shut tight by swelling. He knew he had lost even before Charles was declared the winner. Unfortunately the matched only netted the IRS $100,000, and Louis was forced to fight again.

The International Boxing Club guaranteed Louis $300,000 to face undefeated heavyweight contender Rocky Marciano on October 26, 1951. Few boxing insiders believed Louis had a chance. Marciano himself was reluctant to participate in the bout, but was understanding of Louis's position: "This is the last guy on earth I want to fight."  Louis was dropped in the eighth round by a Marciano left, and knocked out of the ring less than thirty seconds later.

Slow of foot but fast of hands, Joe Louis dominated heavyweight boxing from 1937 to 1948. As world champion he defended his title 25 times, facing all challengers and fighting the best that the countries of the world could offer. In the opinion of many boxing experts, the plain, simple, unobtrusive Brown Bomber, with his crushing left jab and hook, was probably the best heavyweight fighter of all time.