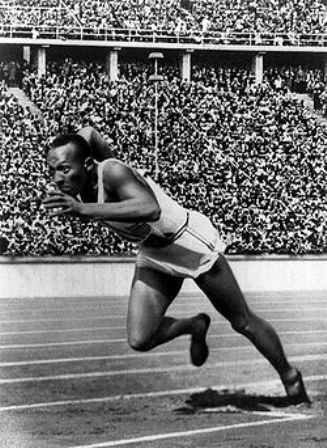 Jesse Owens was the first American to win four track and field medals in one Olympics, doing it as a black man in 1936, made it all the more sweeter.  Held in Berlin Germany with Hitler spouting Aryan supremacy, Jesse Owens made the entire world stand up and take notice by winning four gold medals: one each in the 100 meters, the 200 meters, the long jump, and as part of the 4x100 meter relay team.

James Cleveland Owens was born the seventh of eleven children of Henry and Emma Alexander Owens in Oakville, Alabama on September 12, 1913. "J.C.", as he was called, was nine when the family became part of the Great Migration and moved to Cleveland, Ohio for better opportunities. Misunderstanding J.C. for Jesse by his northern school teacher, Jesse Owens had a new nickname which stuck for the rest of his life.

A sickly child, Jesse Owens looked nothing like an athlete. Even as a scrawny boy Jesse loved running. In his autobiography he wrote: "I always loved running. I wasn't very good at it, but I loved it because it was something you could do all by yourself, under your own power. You could go any direction, fast or slow as you wanted, fighting the wind it you felt like it, seeking new sights just on the strength of your own feet and courage of your lungs."  During middle school Jesse began to grow and fill out, joining the track team and working with Coach Riley, who would be a coach and mentor for years to come. From a skinny boy he developed into a strong runner, and in junior high school he set a record for the 100-yard dash.

In high school in 1933 Jesse Owens won the 100-yard dash, the 200-yard dash, and the broad jump in the National Interscholastic Championships, and was soon getting national attention for his abilities on the track. Owens was such a complete athlete, a coach said he seemed to float over the ground when he ran.

Going to college was a dream that Jesse Owens and his family thought would never happen due to both racial inequalities and the family's financial woes. That dream turned into a reality with the help of Ohio State University. Though not given a scholarship, Owens was able to attend classes, hold three jobs, and train for his athletic pursuits. The University also helped find work for his father. At the Big Ten Conference track and field championships at the University of Michigan in 1935, Jesse Owens broke three world records and tied another. His 26 foot 8 1/4-inch broad jump set a record that was not broken for twenty-five years.

Easily qualifying for the 1936 Summer Olympics,  Jesse Owens was headed for Berlin Germany. Owens's performance at the 1936 Berlin Olympics has become legend, both for his brilliant gold-medal efforts and for the political atmosphere off the track.

Adolf Hitler was using the Olympic Games to show the world a resurgent Nazi Germany. He and other government officials had high hopes that German athletes would dominate the games with victories. Meanwhile, Nazi propaganda promoted concepts of "Aryan racial superiority", while downgrading all other races, especially blacks.

On August 3, 1936 Jesse Owens won gold for the 100m sprint, defeating Ralph Metcalfe. The following day, he finished first in the long jump, later crediting friendly and helpful advice from Luz Long, the German competitor he ultimately defeated. On August 5th, Owens continued his win streak by taking the 200m sprint, and, after he was added to the 4 x 100 m relay team, he won his fourth gold medal on August 9th. Winning 4 gold medals in a single Olympic year was  unequaled until Carl Lewis won gold medals in the same events at the 1984 Summer Olympics.

On the first day, Hitler shook hands only with the German victors and then left the stadium. Olympic committee officials insisted Hitler greet every medalist or none at all. Hitler opted for the latter and skipped all further medal presentations, but the press quickly jumped on the story that Hitler angrily stormed out of the stadium and refused to shake hands with Jesse Owens. Ever the better man, Jesse Owens recounted the event: "When I passed the Chancellor he arose, waved his hand at me, and I waved back at him. I think the writers showed bad taste in criticizing the man of the hour in Germany".

Albert Speer, Hitler's architect and later war armaments minister, recollected: "Each of the German victories, and there were a surprising number of these, made Hitler happy, but he was highly annoyed by the series of triumphs by the marvelous colored American runner, Jesse Owens. People whose antecedents came from the jungle were primitive, Hitler said with a shrug; their physiques were stronger than those of civilized whites and hence should be excluded from future games."

Meanwhile in foreign Germany Owens was cheered enthusiastically by 110,000 people in Berlin's Olympic Stadium, with Germans on the streets seeking his autograph. Owens was allowed to travel with and stay in the same hotels as whites in Germany, but after a New York City ticker-tape parade of Fifth Avenue in his honor, Owens had to ride the freight elevator at the Waldorf-Astoria to reach the reception honoring him.

Since his birth, Jesse Owens had felt the slights, inequalities and blatant racism from his country and later stated, "Hitler didn't snub me, it was FDR who snubbed me. The president didn't even send me a telegram." Jesse Owens was never invited to the White House nor bestowed honors by presidents Franklin D. Roosevelt (FDR) or his successor during their terms. In 1955, President Dwight D. Eisenhower honored Owens by naming him an "Ambassador of Sports."

Jesse Owens struggled financially after the Olympics and had a hard time even completing his college degree. Despite the four gold medals Jesse Owens brought home for his country, he was soon relegated to the second class citizen status African Americans found themselves in during the 1930's and 1940's. Interested in using the status of his name, Jesse Owens was offered a variety of endorsements and jobs. Some people wanted him to race against horses and cars for publicity, others offers were less outrageous. While some deals went awry, others brought him enough money to survive. He was soon appointed director of minority employment at the Ford Motor Company, but later became the secretary of the Illinois Athletic Commission and the Illinois Youth Commission. He was also able to gain enough sponsorship to host the first-ever Youth Olympic Games in Chicago.

In 1976, Jesse Owens was awarded one of the greatest awards an American citizen can be awarded. President Gerald R. Fordawarded him with the Medal of Freedom. Jesse overcame segregation, racism, and bigotry to prove to the world that African-Americans belonged in the world of athletics. Several years later, on March 31, 1980, Jesse Owens, 66, died in Tucson from complications due to cancer. Ten years after his death, Jesse Owens was posthumously awarded the Congressional Gold Medal by President George Bush in 1990.