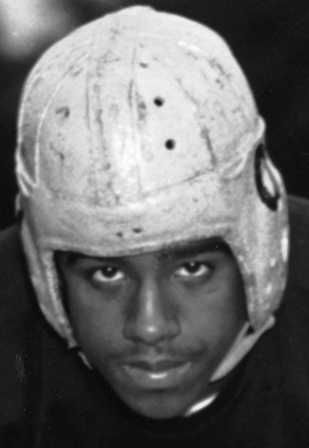 5'4" Claude "Buddy" Young, also known as the "Bronze Bullet," had exceptional quickness and acceleration. He is one of the shortest men ever to play NFL football. A world-class sprinter, Buddy Young enjoyed a lengthy pro football career and served as an assistant commissioner in the NFL. In a college career split by the armed services, the halfback earned All-America honors in 1944. Young scored 13 touchdowns in his All-America year, while rushing for 842 yards with an amazing 8.9 yards-per-carry average. He rushed for 103 yards in Illinois' 45-14 upset of un­beaten UCLA in the 1947 Rose Bowl and was selected as the game's MVP.

Born January 5, 1926 in Chicago Illinois, Claude "Buddy" Young was one of nine children and grew up in poverty with a single mother trying to make ends meet for the large family. Buddy Young grew to a mere 5' 4", but he was a quick and hard working skilled athlete that stood head and shoulders above his peers. When his Englewood High School coach refused to let him play because he was too small, he switched to rival Phillips High and returned to score four TDs against his old school.

Sportscaster Bill Stern called him "The fastest thing in cleats and the runner of the year." Ray Eliot, Young's coach, referred to him as "The best running back I have ever seen." Only a freshman, Young was named to several All-America teams.

In track Buddy Young set records and brought the Illini instant fame. He won the National Collegiate Championships in the 100 and 220 yard dash, tied the world record for the 45 and 60 yard dashes, and was the Amateur Athletic Union's 100 meter champion.

On the grid iron Buddy Young was equally impressive. In his first game for the Illini, he scampered 64 yards for a touchdown on the first play from scrimmage. On his second carry, he ran for a 30-yard touchdown. In all, in his debut he gained 139 yards on 7 carries, an average of 19.7 yards. Before the season concluded, he scored 10 touchdowns equaling the Big Ten Conference record established by the immortal Red Grange in 1924.

World War II raged and many athletes, including Buddy Young were called to service. In January 1945, Young was drafted by the Navy. Initially he reported to the Great Lakes Naval Training Station, but was eventually transferred to the naval base at Fleet City, California. Like many star athletes, Young didn't let the draft stop him from playing the game he loved and soon Buddy Young was playing football for the Blue Jackets, one of the navy coast teams.

In mid-December, the top two coast service teams met for the championship in Los Angeles at Memorial Stadium before 65,000 fans. It was one of Buddy Young's greatest games. After a scoreless first quarter, Young returned a kickoff for a 94 yard touchdown, he ran back another kickoff for an 88 yard touchdown, and took a hand-off from O'Rourke and scampered 30 yards for a third. The Blue Jackets won the game 45-28 to complete an unbeaten season. They challenged the unbeaten West Point team, but the cadets refused the invitation.

Young returned to the University of Illinois and helped the Illini win the 1947 Rose Bowl. Where he was named Co-Player of the Game, after Illinois hammered  highly favored UCLA, 45-14.

After the Rose Bowl victory, Buddy Young left school to sign with the New York Yankees of the All-America Football Conference in 1947. One of the first blacks to play pro football, Buddy experienced the humiliations of prejudice. When the Yankees first played in Baltimore, racists showed up at the stadium in blackface. But he always insisted that the worst prejudice he encountered was against his size. Though NFL record books list Young at 5-4, 175 pounds, those who played alongside him said he probably was 10 pounds lighter and an inch shorter. Few believed that anyone that small could last long with the pros, but Buddy had a track star's speed, water bug elusiveness, and courage. Those added up to much more than any missing size and Young enjoyed  ten years in pro football.

Buddy Young was a threat at several positions. Five times in his professional career, he eclipsed 1,000 all purpose yards, and in 1954, he was selected to the NFL Pro Bowl team. Over his ten year professional career, NFL and AAFL, Young averaged 4.6 yards per carry as a running back, over 15 yards per reception as a receiver, and almost 28 yards per kickoff return, peaking at a remarkable 34.4 yards per return for the Colts in 1953. In a 1953 game against the Philadelphia Eagles, Young returned the opening kickoff 104 yards for a touchdown; at the time, this was the second longest kickoff return in NFL history.

Young was the first Colt to have his number retired and, in 1966, the first African-American executive hired by the NFL. He worked as Director of Player Relations for the NFL up until his untimely death in a car accident in 1983.