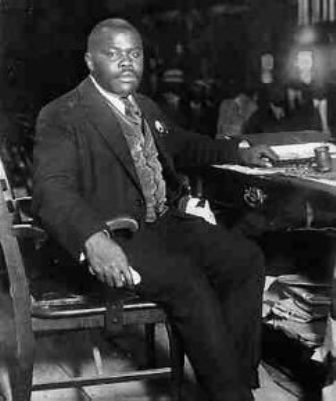 The Universal Negro Improvement Association (UNIA) is a black nationalist fraternal organization founded by Marcus Garvey in Jamaica in 1914. Garvey arrived in the United States on March 23rd in 1916 and immediately launched a year-long tour of the country. He organized the first branch of UNIA in June 1917 and began published the Negro World, a journal that promoted his African nationalist ideas. Garvey's organization was extremely popular and by 1919 UNIA had 30 branches and over 2 million members. The organization enjoyed its greatest strength in the 1920s, prior to Garvey's deportation from the United States of America, after which its prestige and influence declined.

According to the preamble of the 1929 constitution as amended, the UNIA is a "social, friendly, humanitarian, charitable, educational, institutional, constructive and expansive society, and is founded by persons desiring to do the utmost to work for the general uplift of the people of African ancestry of the world. And the members pledge themselves to do all in their power to conserve the rights of their noble race and to respect the rights of all mankind, believing always in the Brotherhood of Man and the Fatherhood of God. The motto of the organization is 'One God! One Aim! One Destiny!' Therefore, let justice be done to all mankind, realizing that if the strong oppresses the weak, confusion and discontent will ever mark the path of man but with love, faith and charity towards all the reign of peace and plenty will be heralded into the world and the generations of men shall be called Blessed."

Like the National Association for the Advancement of Colored People (NAACP) Garvey campaigned against lynching, Jim Crow laws, denial of black voting rights and racial discrimination. Where UNIA differed from other civil rights organizations was on how the problem could be solved. Garvey doubted whether whites in the United States would ever agree to African Americans being treated as equals and argued for segregation rather than integration. Garvey suggested that African Americans should go and live in Africa. He wrote that he believed "in the principle of Europe for the Europeans, and Asia for the Asians" and "Africa for the Africans at home and abroad".

Garvey was born in 1887 in St. Anne's Bay, Jamaica. Due to the economic hardship of his family, he left school at age fourteen and learned the printing and newspaper business. He became interested in politics and soon got involved in projects aimed at helping those on the bottom of society. Unsatisfied with his work, he travelled to London in 1912 and stayed in England for two years. During this time he paid close attention to the controversy between Ireland and England concerning Ireland's independence. He was also exposed to the ideas and writings of a group of black colonial writers that came together in London around the African Times and Orient Review. Nationalism in both Ireland and Africa along with ideas such as race conservation undoubtedly had an impact on Garvey.

The Negro World was founded August 17, 1918 as a weekly newspaper to express the ideas of the organization. Garvey contributed a front-page editorial each week in which he developed the organization's position on different issues related to people of African ancestry around the world, in general, and the UNIA, in particular. Eventually claiming a circulation of five hundred thousand, the newspaper was printed in several languages. It contained a page specifically for women readers, documented international events related to people of African ancestry, and was distributed throughout the African dispersion until publication ceased in 1933.

Large branch meetings of the UNIA were like religious revivals, with entire families gathering for a day of debates, fashion shows, classical music, plays and vaudeville acts. Garvey gave his followers, who were dispossessed in the broader society, a sense of belonging. Men could join the African Legion. For young people, the U.N.I.A. Juvenile Division. And in the Black Cross Nurses and the Universal Motor Corps, the Garvey movement offered black women a place of their own. He created the red, black and green flag (shown here) to symbolize black unity. And there were official U.N.I.A. slogans, prayers, poetry and songs.

Garvey was known to rule the U.N.I.A. with an iron hand. He did not tolerate disagreement on even insignificant matters, and demanded complete loyalty from U.N.I.A. members. His autocratic style would over the years cause considerable dissention within the ranks, and turnover and defections among the U.N.I.A.'s top leadership.

In addition to the internal problems of the Garvey movement, Garvey and the U.N.I.A. became targets of the Bureau of Investigation (the precursor to the FBI) in a campaign directed by the then up-and-coming J.Edgar Hoover. For five years beginning in 1919, largely under Hoover's direction, Bureau of Investigation officers would report on U.N.I.A. activities in over two dozen cities. Hoover would also coordinate the actions of at least seven federal government agencies investigating Garvey, in what some experts have called a personal vendetta.