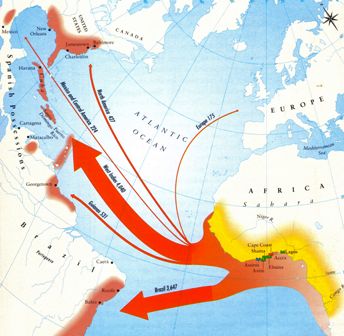 By the end of the 15th century, Europeans had superseded their Arab and African counterparts and established a modern trans-Atlantic slave trade. A commercial revolution in Europe led to the rise of powerful nations such as Spain, Portugal, Britain, France and Holland. This created new ideas featuring competition, commodity exploitation, and the accumulation of wealth. The importing and exporting of slaves became an acceptable and profitable part of European commerce.

Portugal was the first European country to see the profitability of slave trading.  They exploited the rivalries between  the more than 200 different ethnic groups in West Africa. Christian Europeans who believed that enslaving other Christians was immoral had no qualms about enslaving pagan or Muslim Africans. As early as 1502 Portugal was shipping enslaved Africans to the Caribbean and Brazil to work on sugar cane plantations. As these plantations grew in size more and more slaves were needed to do the hard work in the fields. With new slaves constantly arriving from Africa it became more profitable for planters to import newer, fresher slaves than to care for those already working the fields of Cuba, Jamaica, and Barbados. With new slaves constantly arriving planters and overseers devised a system to break in newcomers. After being broken in spirit as well as in the habits of freedom, new slaves were often re-exported to North America.

The slave trade quickly exploded into a multi-million dollar enterprise, employing thousands of people and beginning the largest forced migration in the history of man. The coast of West Africa was soon filling up with an extensive network of European forts. The Gold Coast, which is now Ghana had dozens of European castles, some able to hold up to 1500 slaves. Local rulers were easily paid off in rent and protection fees. Slaves were prisoners of wars,  prisoners convicted of crimes,  and kidnap victims. African traders usually marched their victims in chains to the forts along the coast, many times in groups as large as 150 people. After purchase the slave's skin was branded with the insignia of their purchaser. Their teeth, genitals, limbs and stature were inspected and defects reduced the price. The slaves were held in the dungeons until the ship arrived to take them to their next destination. Many slaves died before they departed Africa.

The one way trip to the Americas was known as the Middle Passage. The Middle Passage across the Atlantic was brutal. It is estimated that on average 20% died en route rising to 40% on a bad voyage. European sailors who crewed the ships also stood a high chance of not returning due to sickness during the voyage. Enslaved Africans were packed into tight spaces and given barely enough food and water to stay alive. Slaves were chained together in twos by their hands and feet. They were stacked as tightly as possible in the ships hold, like books on a shelf. More slave cargo meant more profit so often times slaves were denied standing, lying, or even sitting room.

The Middle Passage journey lasted anywhere from  six to sixteen weeks. Because of the cramped conditions and poor hygiene diseases would travel quickly through the ship. Smallpox, dysentery, fevers and more, combined with the danger of rough seas were all a real threat to both the slaves and the sailors. it became evident early on that unchained slaves may choose suicide over the brutal and inhumane voyage to slavery.

In Caribbean ports, slave ships replaced many of the slaves in their holds for  products like rum and molasses, and sometimes already broken in slaves before sailing on for North America. In ports like Charleston and Boston, slaves and the Caribbean supplies were traded for North American commodities like tobacco, furs, and fish. Traders then concluded their journey when they unloaded their merchandise in  European ports like Lisbon or Liverpool.