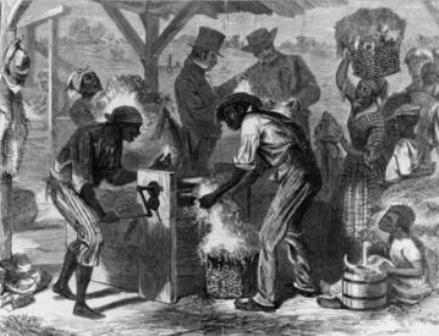 In the 80 years between the American Revolution and the Civil War, the North and South developed along distinct and opposing lines economically, politically, and culturally. The South took a very different economic course than the North. After the Revolutionary War, tobacco income plummeted, cotton brought the stagnant southern economy back to life. While the North became an industrial and manufacturing powerhouse deeply affected by social reform movements like abolitionism and women’s rights, the South became a cotton kingdom, founded on slavery, whose inhabitants generally abstained from or opposed such reformist tendencies.

As white settlers from Virginia and the Carolinas forced the original Native American inhabitants farther and farther west, they moved in and established plantations. The cotton-producing region of the southern United States was controlled by plantation agriculture. From the Atlantic coast to Texas, tobacco, rice, and sugar were staple crops from 1800 to the 1860s. It was cotton production, however, that controlled life in the region.

The notion of mass production of cotton in the South, and slavery with it, was dying out prior to the turn of the nineteenth century due to slow and unprofitable methods employed by the farmers. In 1793 that changed with the invention of Eli Whitney's cotton gin. The gin made mass cotton production in the South feasible and helped to institutionalize slavery in the region. The Louisiana Purchase and the annexation of Texas as a slave state helped to expand the Cotton Kingdom. Politically, cotton became the foundation of southern control of the Democratic Party.

The widespread use of the cotton gin, invented by Eli Whitney in 1793, made cotton plantations efficient and profitable. The demand for cotton also grew because of the developing textile industries in the North and in Britain. Cotton plantations spread across the South, and by 1850, the southern U.S. grew more than 80 percent of the world’s cotton.

It cleaned cotton very quickly, It did the work of 50 slaves at a time. It could generate 50 pounds of cleaned cotton within a day's work. Eli didn't make much profit from this machine because many people copied his machine and designs and sell them. The influence of the gin was instantaneous.

Southern mechanics set up gins as far west as Mississippi. By 1804 the cotton crop was eight times greater than it had been the previous decade. The cotton gin made practical the use of the heavily seeded short-staple cotton, which could he grown in upland areas more readily than long-staple cotton. An increase in market demand growing out of England's textile industry ensured favorable prices and spurred the ascension of the short-staple cotton industry.

Improvements in the production and transportation of cotton and the new demand for the fiber led to a scramble for greater profits. To reap the most profits and to provide the labor needed for cotton picking, a large number of slaves were imported into South Carolina and Georgia, and slave labor became a valuable market throughout the South.

As the cotton-based economy boomed so did slavery, since slaves were needed to man the large-scale and labor-intensive plantations. Although Congress banned the importation of slaves in 1808, the smuggling of slaves continued until the 1850s, and the southern slave population doubled between 1810 and 1830. Three-quarters of these slaves worked on cotton plantations, while the remainder worked a variety of skilled and unskilled jobs. The rise in slavery led to the development of a slave culture, and also to an increasing, though generally unfounded, fear of slave revolts. Various slave uprisings did occasionally erupt, however, most notably, Nat Turner’s Rebellion in Virginia in 1831.

The cotton kingdom also brought more people to the South. Getting rich by growing raising a cotton crop where slaves did all the hard labor was attractive to many farmers. Causing great growth in the areas new slave owning states such as Texas quickly grew. Politicians quickly saw that if the south got more states they would dominate the north in the senate. When this happened, they planned to reject any law made by the north to abolish slavery, and also ban any bill that may benefit the north.

As the U.S. cotton industry developed, other countries became more dependent on cotton produced in the American South. The power of cotton allowed the Confederacy to employ cotton diplomacy as its foundation for foreign relations during the Civil War; Southerners attempted to use cotton to pressure countries such as England and France into the war on behalf of the Confederacy. Southern leaders were convinced that the key to their success lay in gaining international recognition and help from European powers in breaking the blockade that the Union had thrown up around coastal areas and ports and that was increasingly effective as the war went on.

With the end of the Civil War on 9 April 1865, cotton was no longer the backbone of southern politics, but it remained the largest crop and source of income. Both prosperity and population dropped after the Civil War and continued to decline until an upsurge in the 1960s. Since then, the southern United States has replaced cotton with industry.